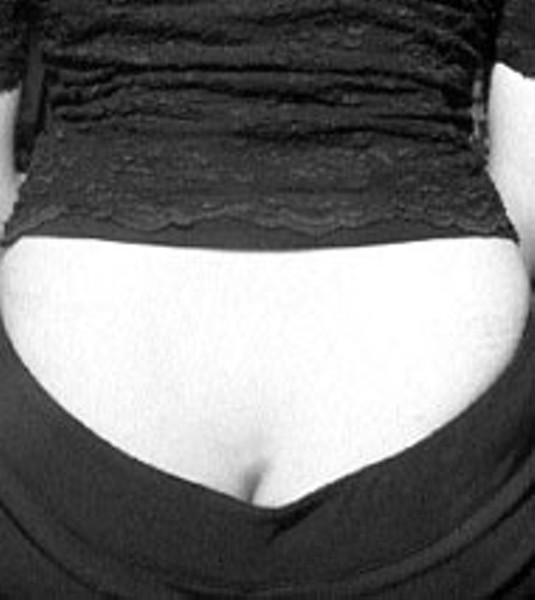 Radok Butt cleavage: it's not just for plumbers anymore
Just a few years ago it was considered in bad taste to reveal your butt crack. Getting cheeky was an icky faux pas reserved for plumbers and the odd teenage boy with unresolved pant-to-boxer issues. Now, however, the tender cleft is in your face. Girls in low-slung jeans sit insouciantly on bar stools, "presenting" their rears like primates in heat. The jeans tug downwards, the butt balloons upwards, and at least an inch of crack blooms above the belt loops. Some have tattoos just above the crack, a titillating invitation to stare. Others brandish thongs or g-strings, which ride above the waistband -- a hint of Monica Lewinsky.The posterior has, intentionally or not, recently become the focal point of fashion and pop culture alike: The butt crack is the new cleavage, reclaimed to peek seductively from the pants of supermodels and commoners alike. Blame it on J.Lo and the rise of booty-centric hip-hop culture; or point your finger at the return of the low-rise jean, a familiar fashion rehash that has exposed millions of unwitting lower clefts.

Perhaps, having grown weary of nipples and thighs, we simply needed a new body part to fetishize. And maybe that's not a bad thing. It's hard to oppose a trend that extols a generous posterior. But like so many trends that spring from retail, this one comes with a punishing beauty protocol. We're going to expose your butt now, the fashion industry has said, and it had better look good.

This is a rather abrupt change from the recent decade's parade of anemic asses. But the behind does have a glorious and full fashion history. Consider the corset, designed to show off the bosom and ample rear by cinching in the waist; or the bustle, which was all about giving baby some back even if she didn't have any to speak of. The round behind lost some momentum after these prosthetically supported heydays, making only rare appearances, often as a bonus body part on the statuesque bods of busty movie stars like Marilyn Monroe and Jane Russell. Then it vanished for what seemed like forever, from Twiggy to waif models, from tiny to nonexistent.

Maybe, then, the return of the rear end was inevitable, one more body part cycled through the fashion wayback machine to keep things fresh (and selling like hot cakes). But bootyliciousness also comes to us by way of the street, a byproduct of the mainstreaming of hip-hop culture, and the accidental fallout of the low-cut pant. Every teenager in America has turned on MTV at some point to see serious backsides jumping to a beat while a rapper extols the glories of the booty.("I like the way she shake it in the thong -- OOOHHHWEE!" says Master P.) After Out of Sight, Jennifer Lopez's butt was the toast of the nation. Suddenly big wasn't bad and fashion was accommodating.

The invention of the thong bikini (and subsequently the pop sensation Sisqo) was the next step in the public blessing of the backside. It was just a short step from tight pants that emphasized the butt, to bathing suits that tanned it, to fashion that exposed the behind altogether.

Not that butt cleavage was an intentional move. It hit the fashion mainstream more as a consequence of the low-rise pant than the brainstorm of Seventh Avenue. Arguably, this coincidence can be blamed on fashion enfant terrible Alexander McQueen who, in 1997, sent models down the runway in bumsters that revealed several risque inches of butt crack. By last summer, it was impossible to find a pair of jeans that actually covered your hipbones, and the result was a parade of inadequately covered posteriors. It is possible that many among us never intended to expose butt cracks, but the cut of the pants made it inevitable: Simply put, it is impossible to sit down in a pair of low-rise pants without displaying at least an inch of cleft.

Whether the revealed ass-crack was simply a side effect of bad fashion design or a malicious conspiracy on the part of the jeans industry, the jean-buying population bought in. The youth of America seems blithely undisturbed by the fact that they now feel gentle breezes in places where the sun don't usually shine. Meanwhile, at the high end of the trend, risque haute couture designers like Donatella Versace and McQueen have picked up on the look and are now intentionally dipping their ball gowns a few inches lower to expose the tops and sides of the buttocks.

Fashion pioneer Sharon Stone best embodied this trend, appearing, over the course of this spring, in a dipped-in-the-back Oscar dress that revealed the tip of her butt crack and a sheer-paneled dress that entirely revealed the sides of her behind (and the fact that she wasn't wearing any panties).

In other words: The butt crack has arrived, an affect of lowly citizens and shock-driven fashionistas like Stone and Versace. The butt crack is the new, 21st century kind of sexual fetish: It's naughty and slightly tawdry, but with the soft round charm of a perfect pair of breasts. Unfortunately, a key word here is "perfect." Perfection is the fuel of the fashion retail-industrial complex. And so, even if the visible butt crack was a kind of serendipitous fashion accident, it has been co-opted by salaried "tastemakers" as a phenomenon ripe for rules and regulations.

"The derriere isn't a body part as much as an embodiment of personality," claims the June issue of Elle magazine in its six-page spread devoted to the visible posterior. This from a glossy magazine which, like all fashion magazines, has spent decades sternly prescribing squats to flabby readers -- the same magazines that for years have lectured that the best kind of ass is no ass at all (see: Kate Moss). All is forgiven, they write. Aspire now to the ampler behinds of Jennifer Lopez, or Sophie Dahl, or Catherine Zeta Jones.

Of course, J.Lo's butt is hardly elephantine, nor is Dahl's or Jones' or that of anybody else featured as a bearer of good butt. A thunder butt is still a fashion taboo, and no one is bothering to make low-rider jeans in a size 16 since no one wants to see that much butt crack. In fact, the rise of the noticeable behind is ultimately putting even more stress on the body conscious: No longer do you just want a skinny butt, now you also need one that is "high, round, shapely and firm," according to Elle. It has to have enough curve to round out those low-rise jeans, and enough oomph to create a comely cleavage without evoking a primitive fertility goddess.

And the proper grooming of your behind no longer begins and ends at the gym. No, no: The newly revealed ass must be treated to an entire beauty regimen of its own. You must wax your bootie to eliminate all unsightly hairs that might peep from between your cheeks. You must massage your buttocks daily to "remove excess water and facilitate lymphatic drainage, causing the skin to plump, making dimpling less noticeable," says Elle. Your butt must be tan, but not sun-damaged, making G-string beach sessions problematic and self-tanning lotions a must. And don't forget to moisturize and exfoliate to eliminate embarrassing acne.

Finally, there's the underwear problem. Visible Panty Line is unforgivable (despite the unfortunate youthful trend of wearing your thong hiked above your belt), and as the waistline of jeans plummets, your underwear options will be equally constrained. You'll need to purchase an entirely new wardrobe of intimates that ride as low as your pants. (The undergarment industry has happily obliged by inventing low-cut panties, which are selling up a storm.)

Of course you can always just buy a new butt. Good Morning America recently reported that butt implants, designed to give a boost to an otherwise nebbish rear end, are on the rise at $10,000 a pop. (Pop star Kylie Minogue is a customer, the gossip rags claim.) If this proves too costly for you, you can simply purchase a pair of padded panties to mimic what nature denied you. (Gay men have been wearing them for years.) These are to ass cleavage what the Wonderbra was to the breast.

Alas, it is true. The embrace of the generous posterior and its cleft is quickly devolving into yet another reason for a woman to feel lousy about her body. The good news is that, if this trend is like all others, it won't last. Super-low-rise jeans are already disappearing from the runways, along with butt-cheek revealing micro-minis. High-waisted pants are coming back, the glossies say. By the time the fashion slave has spent a summer's salary on new underwear and cellulite creams, implants and Brazilian bikini waxes, the visible butt crack will have vanished underneath the fall fashions.

And what beyond the butt crack? Total nudity is probably out, if the fashion industry has anything to say about it. Visible pubic hair may be a possibility, though that seems like a bit much for even Alexander McQueen. Perhaps the pendulum will simply swing back and the call will go out for high collars and more buttons. Hard to say. Best, under the circumstances, to investigate your plumber's closet and move on.

Janelle Brown is a contributing writer for

Salon, where this article originally appeared.