Hectorina Frontman Dylan Gilbert Is Much More Than a Songwriter

A Man of Many Mediums

The electric guitar is dead.

As a lightning rod for wayward souls, as a compass for creative nomadic minds and as way out of whatever real or figurative slum you may have grown up in, the electric guitar has bowed to the synth and drum machine, and its age has passed. Tell that to Dylan Gilbert, guitarist, singer, helmsman of Charlotte's indie darlings Hectorina and the city's most interesting art-rocker, and you might be surprised at the response.

Gilbert has agreed to meet me at Central Coffee, in the center of the quickly gentrifying vortex of Plaza Midwood, and right on the heels of a late Friday morning southern summer downpour. Before sitting down to talk about Charlotte art, Gilbert's music and band, we kvetched for over an hour, touching on subjects like interdimensional travel, the new Twin Peaks (he's a serious fan and knows his stuff), Jodorowsky's El Topo, the current political climate (of course), and the pros and cons of turning a studio into a forest (more on that in a minute).

The focus, once we rolled tape, was on Dylan Gilbert: what he's doing, why he does it, and how it comes to him. The first question, of course: How do we navigate indie rock in the last days of the guitar?

As mentioned, the answer was unexpected. 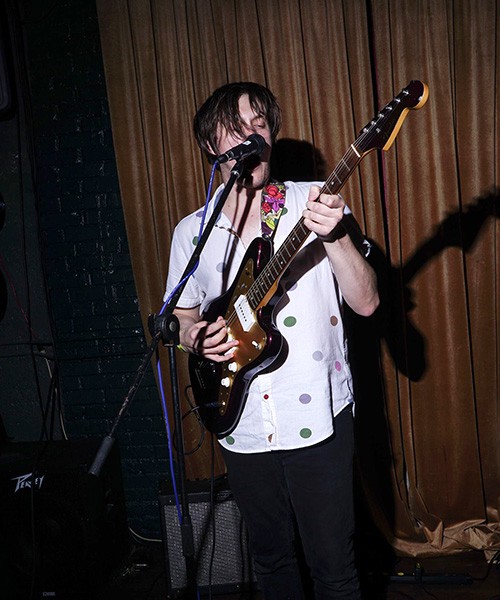 "The big part of me is that that I really don't care that much, and let me elaborate on that," he tells me with an infectious grin. "Because I'm sure every guitar player who reads that quote would be like, 'What the fuck?'"

Gilbert leans forward, and the first thing you notice is how even his speaking voice is, a stark contrast to the aggro-melodic acrobatics he accomplishes vocally when fronting Hectorina's angular guitar attack. "The guitar is what I gravitated toward in my own house to make music with when I was a kid. When I really first started making things, though, it was sound collage. We're talking like when I was 12, before I knew how to play anything, before any real music knowledge at all."

Sound was what attracted the young Gilbert at first, until bands like Weezer and the Beatles lit the guitar runway for him. Ultimately, he would come to see himself as a songwriter, and the guitar was simply a good way for him to write songs. Nowadays, however, the palette has expanded. "I'm just as apt to write a song on the piano, or on Garageband, or whatever."

The spinach quiche that Gilbert bought with his coffee has been sitting untouched until now, but he starts to tear into it as the conversation gets deeper. "I'll start out with a beat, and put something down that way, but I really try to not think of myself as a 'guitar player' proper, because there's certainly people that do it a lot better than I do." He laughs, shakes his head self-deprecatingly, and takes a sip of coffee.

It could be true that Gilbert uses multiple approaches in his songwriting today, but many of Charlotte's guitar-based heroes at home and abroad have definite opinions about his guitar skills and creative mind, and the praise is sincere and effusive. Phil Black is the production manager for one of the city's last free-standing indie venues, the Rabbit Hole. He's also a guitar instructor for Rock University (one of the competitors of Gilbert's School of Rock, where he's taught for years) and the well respected axeman for Charlotte's Crackers and Snackmeat.

"I first met Dylan when he was in his teens," Black says, "and he has been constantly resetting the bar for creativity, ambition and drive in the Charlotte music scene. There isn't a box that can contain his musical thought process." As the almost nightly sound engineer for the Rabbit Hole, Black has seen and heard just about all of it, but Gilbert, whether on his own or in one of his group projects, never ceases to bring the fan out in him. "I'm always excited to hear something new of his, and to watch his musical journey," Black says.

Case Federal, whose pedigree in Charlotte music is beyond reproach — his dad is local blues legend Lenny Federal — spent years making a holy racket in Queen City art dives and bars before taking his own special brand of musical weirdness to Austin, Texas. Even now, Case has nothing but respect for Gilbert, with whom Federal has shared years and musical adventures. His allegiance is strong. "Dylan is a musical tour de force," Federal declares. "I've had the pleasure of sharing the stage with him for over a decade, and he is easily one of the most prolific and entertaining musicians in the Charlotte scene." In addition to sharing stages, Federal and Gilbert were both instructors at the School of Rock, but the roots go back even farther than that. "Ever since high school, he has been an inspiration and a positive influence on me and my music, as I'm sure he's been with countless local artists as well."

Early Dylan Gilbert performances betrayed the influences of classic and indie art rock. Artists as diverse as James Brown, Tom Verlaine and The Shins could be heard in a musical approach that Gilbert describes as "somewhat twee and nerdy." Gilbert was naive in his early years but also very idealistic. "I felt like the scene should help each other, there should be more love there, and it seemed like more pockets of social groups," he says. "I became somewhat disenfranchised from this beer-drinking attitude about rock'n'roll."

That disenfranchisment led to Dylan Gilbert and the Over Easy Breakfast Machine, a trio he formed with drummer John Harrell III and bassist Zachary Jordan. After extensive touring in 2011, the trio reincarnated on New Years Eve 2012 as Hectorina. "The thing about Hectorina is that we are total music nerds," Gilbert says, with that grin. "Like we'll be obsessed for five months with only Brazilian psychedelic samba from 1967 and 68, and we'll all be on board with that."

Musical nerdiness can pay creative dividends. If rock has died and its totems are in its last days, no one told these guys. After a well-received, self-titled full-length album, the group decided to go the sensible route; they followed it up with a full-blown rock opera.

Released in 2013, Collywobble was adapted to the stage for 2014-15. Hectorina shared bills with national acts in New York City during the 2014 CMJ Music Marathon, and headlined the opening night of the Indie Grits Fest in 2015. As a followup, A Thousand Jackals, produced by Daniel Hodges (Fun, Steel Train) was released on January 1, 2014, and later won Best Local Album of the last 12 months in Creative Loafing's Best of Charlotte issue.

It was Collywobble, though, that got Gilbert together with the Goodyear Art collective. "I always felt more in common with painters and artists of all kinds," Gilbert says, as we order another round of coffee. "I started gravitating toward that, thinking they could maybe promote a better dialogue. Goodyear came along, and I thought they were amazing because they're dodging the gentrification problem we have here in Charlotte, where every cool neighborhood is getting bulldozed."

It's not lost on either of us that just across the street from where we're sitting, a wonderfully homogenous new apartment building has sprung up on the bones of the legendary Reflection Studio, where R.E.M. recorded the legendary Reckoning album, as well as tracking names such as James Brown, Joe Walsh and Whitney Houston. "All those great albums were made right where that shitty apartment complex is right now." Gilbert shakes his head, sincerely astounded. "It's really a problem here in Charlotte, but -", his face lightens, "what Goodyear is doing is they'll move into a building that they already know is gonna get torn down, with the purpose of using that space up as much as they can, and then move on to another building that will get torn down. It's an awesome way to dodge the gentrification problem."

Gilbert went into a collaboration with Goodyear and was given studio space, which he promptly filled with dead leaves, dirt and broken tree limbs. A canopy of PVC pipe was placed over it all, but with a twist: this spooky forest was wired for sound. "Everything you touched and every step you took made a sound. So it was this interactive sound collage." Participants would get a cassette of the sonic journey they took through Dylan Gilbert's Sonic Wood at the end of the happening.

"That idea came from being a music teacher for the last few years. I was thinking, what is it that I really love about being a musician? One thing I really love about being a teacher of music is that blind excitement that a child has when they're just...going wild with something. A kid will be like 'I wanna play the drums!' and they're not even necessarily thinking about doing a song per se. It's more about how loud the drums are, and what kind of a noise they can make. Not even about being an artist or a performer. Just the sheer wonder of it all. So that's where the forest idea came from. How do I take a person out of their reality, and put them in a situation where they can just make as much racket as possible." 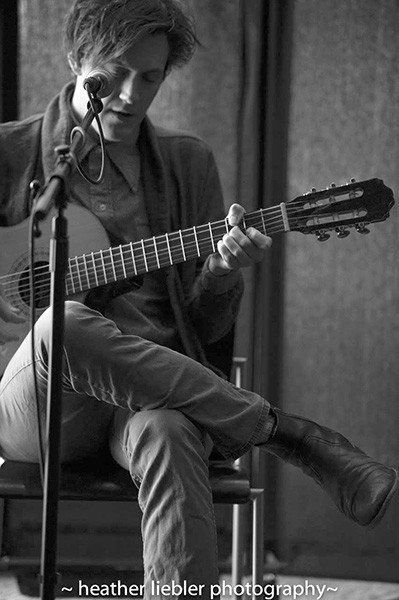 Another project that Gilbert undertook with Goodyear, the one-act acid western All The Dogs And Horses, was expanded on and done at the Boom Festival this year. That involved a rotating cast of some of Charlotte's best performers and an immersive desert set. To minimize the cost of musicians and sound effects, the soundtrack and the script was prerecorded. Actors lip synced to the canned dialogue, giving the already trippy piece an even more surreal edge.

Indie film work, commercials — local trivia tidbit: Gilbert was the voice of Kepper Kia in Mooresville for a minute — and experimental theatre, there hasn't really been a media that Dylan Gilbert hasn't put his own creative spin on. It raises a final question though. How does Gilbert feel that all the theater and film work he's done is going to inform the work he does with Hectorina, or any other music project?

"For me, I can't write the same kind of songs, I've already written 200 songs, so at the end of the day, regardless of whatever project I'm working on, I'm still gonna be sitting down with that guitar, or my computer, or at a piano, and writing a song, in the simplest terms. But all these other experiences are going to inform that, and the creative people that I'm so lucky to get to work with, are going to help me look at that work differently. I'm less prolific now, but maybe a little more mindful."