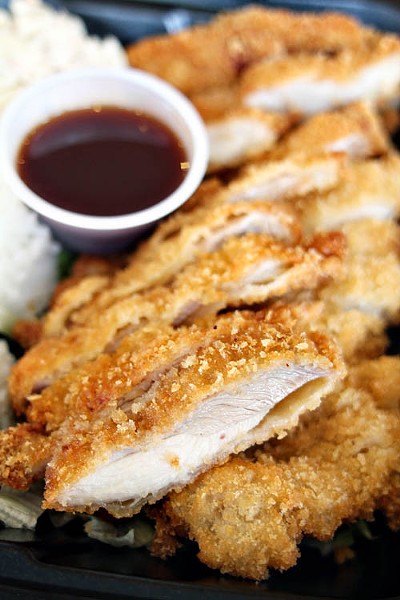 AN ALTERNATIVE TO SPAM: The 'mystery meat' is on the menu at Aloha Hawaiian BBQ & Grill, but it's the excellent chicken katsu (pictured) that should leave patrons dancing.


About 800 Hawaiians live in the Charlotte metro area — or at least that's the estimate cited by Kevin Siu, general manager of the recently opened Aloha Hawaiian BBQ & Grill. Owner Kevin Chang has many similar fast casual restaurants in California, but this is his first in North Carolina.

Hawaiian food is a product of indigenous foods with a strong multi-ethnic mix including influences from Japan, Polynesia, China and the U.S. mainland. One of the Pacific influences includes a mash of the taro, or kalo, root, known as poi — a love it or leave it food due to its viscosity and flavor. At Aloha, you will not find poi, but you will find some of the quintessential dishes of Hawaii like Loco Moco, a hamburger patty with a fried egg on a bed of rice doused in thick brown gravy. Oh my.

Another specialty is Spam musubi, a slice of pink Spam atop a pillow of sushi rice banded with a thin strip of black nori — in other words, Spam Nigiri. This deliberately plain appetizer tastes like it looks: Spam on top of rice. I'm not sure what kind of shotgun wedding brought about this offspring, but Spam musubi is a dish to try, at least once.

On the other hand, just when you thought you could name all the best fried chicken places in town, think again. The newest competitor is chicken katsu from Aloha. Deboned and flattened chicken breasts are marinated and then breaded with Japanese bread crumbs — a lighter mix than Panko. After a spell in the fryer, the chicken is sliced into strips on steamed cabbage and served with house-made katsu sauce, a mix of ketchup, chili and spices. The heat sneaks up at the end.

Chicken katsu is part of Aloha's Plate Lunches — similar to Southern "meat and three" eateries. Plate Lunches are accompanied with steamed white rice, a heavily dressed macaroni salad or a pineapple fruit salad radiating the tropics so effectively that sunblock is required. Mahi mahi, less dynamic than the katsu, is lightly breaded with cornmeal that, to me, ruins any fish by masking its inherent flavor. I would rather taste the ocean than corn. A better dish is the distinctly Asian barbecue plate with grilled chicken breast, beef, and thinly sliced Korean-styled kalbi short ribs, all unapologetically bathed in a sweet teriyaki-based sauce.

These simple entrées are recipes from the original Aloha Hawaiian BBQ & Grill in California, and while this is a fast-casual concept, all sauces and dishes are prepared in-house, a welcome concept in this culinary genre. Aloha is a typical Plate Lunch styled eatery with only 32 seats, stark furnishings, and an order board posted overhead behind the counter. More than half of the space is dedicated to the kitchen.

After eating a Plate Lunch at Aloha with its enormous portions of meat, macaroni salad, and white rice, one wonders how Hawaii is also the place where people look good in bathing suits. But while Aloha may inspire momentary West Coast fantasies for some, for others it sets a lovely standard for those longing for the fast food of the islands.