The Black Crowes are back but leave questions unanswered 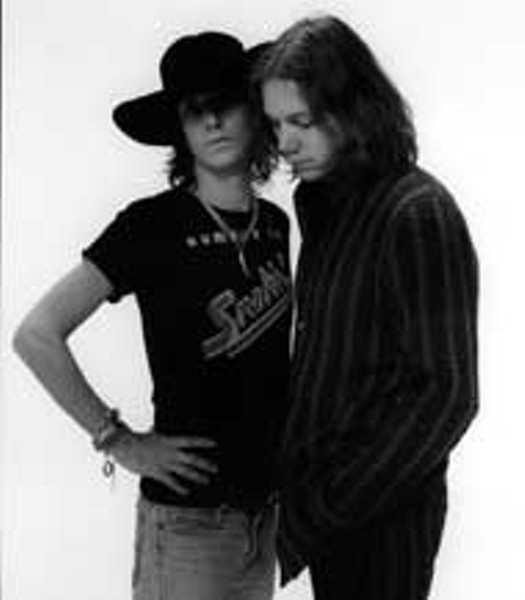 the Black Crowes The Black Crowes' Chris and Rich Robinson
You might call it sweet irony that the name of one of the earliest and most popular songs the Black Crowes ever recorded was "Hard to Handle." With continuous personnel changes throughout their 15-year recording career, the Crowes have long lived up to the title. Then, of course, there's that outspoken lead singer who, at one time or another, has berated his peers, his own audience, headlining bands, corporate sponsorship and, well, society in general. Not exactly the best formula for maintaining a hugely successful musical career these days. So when news broke in October 2001 that the Georgia boys would be taking "an indefinite hiatus," it may have been tempting for fans to think about throwing in the towel. As rock & roll history has shown us more times than not, "indefinite hiatus" usually means it's over, as in the end, kaput.

But a good three years after the fact, Atlanta's original dirty birds are back on the scene, led, like always, by brothers Chris and Rich Robinson, and joined by a cast of familiar characters who've either been lucky or cursed enough (you can decide) to have endured this particular passage in Southern rock history.

As much as I would like to share the feelings of those who think this reunion of sorts signifies a new beginning for the Black Crowes — or at least a new album — it's a little hard for me to believe, considering the band is forgoing all press interviews at this time.

One thing seems certain: The momentum of what supposedly started out as, "Hey, let's get back together for a couple of shows" continues to build. A handful of dates have turned into a mini-headlining tour that also includes a few key spring/summer festivals (among them, Bonnaroo, the New Orleans Jazz & Heritage Festival, Detroit Lakes' 10,000 Lakes Festival). And now the Crowes are readying for a summer tour with Tom Petty & The Heartbreakers.

If a recent show in Asheville is any indication, the Crowes may prove worthy of a second chance, though greatest-hits-only seekers need not apply. As consistent as they've always been about bucking the norm, the Crowes don't seem to be back to simply rehash nostalgia. In fact, during their initial seven-night stint at New York's Hammerstein Ballroom, the band cranked out a total of 64 different songs. So on any given night, the set list is almost guaranteed to include a handful or so of obscure album tracks, b-sides or cover tunes.

In Asheville, Chris Robinson greeted the spotlight in rare form: He actually appeared to be in a non-confrontational kind of mood. He was confident, as usual, but didn't express an ounce of sarcasm. (Really, how bad could life be for a guy who spends most of his down time in Malibu with Kate Hudson?) His voice was strong and complemented by a group of soulful back-up singers on board for the current jaunt. His brother, guitarist Rich, was joined by guitarist Marc Ford (circa '92 to 97) and bassist Sven Pipien ('98 to '01). Longtime keyboard player Eddie Hawrysch was back, and just recently, original drummer Steve Gorman rejoined the group.

Here's the rub: As nice as it is to see the Crowes back in action, it sure would be good to know why they're performing as part of a Miller Brewing Company-sponsored show. After all, it was Miller that tossed the Crowes off a national tour opening for ZZ Top in 1991 because of Chris Robinson's disparaging remarks from the stage about Miller and corporate sponsorship. Too bad Robinson's chosen to remain mum about it this time around. But what do you expect from a guy who is proudly hard to handle.

The Black Crowes perform at Lowe's Motor Speedway Saturday, May 21, in a pre-race concert for the NEXTEL Cup All-Star Challenge. The band is scheduled to perform at 3pm; ticket prices start at $33. Call 1-800-455-FANS or visit www.lowesmotorspeedway.com for more details.