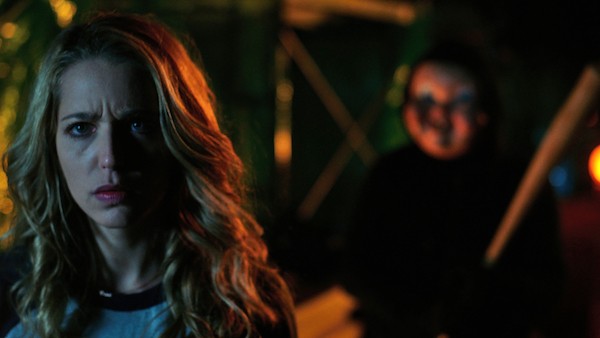 Groundhog Day gets run through the grinder in Happy Death Day, a horror yarn that derives a fair amount of mileage out of its canny premise.

Set on a college campus, Happy Death Day centers on Tree (Jessica Rothe), a sorority girl who gets murdered on her birthday. But death isn’t the end for Tree — like Bill Murray’s weatherman, she wakes up again on the same day, and she soon realizes that she will keep dying (and keep repeating the day) until she identifies her killer.

After the excellent Edge of Tomorrow, any movie sporting a similar premise is bound to look anemic, and Happy Death Day certainly doesn’t hold up to much post-viewing scrutiny. But as it unfolds, it’s entertaining enough, bolstered by at least one clever fake-out, a strong central performance by Rothe, and the striking employment of a cherubic mask that — if the movie’s a hit — might end up being sported by numerous wise guys come All Hallows’ Eve.