Halloween: The Shape of Things Too Dumb 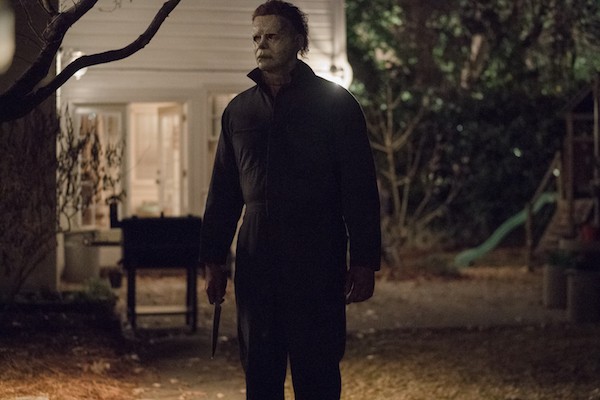 Well, I guess this is what happens when a valuable franchise is entrusted to the guys who foisted Your Highness upon an unsuspecting world.

Despite brandishing the same title, the new Halloween isn’t a remake or a reboot or a reimagining or a [insert preferred buzzword here] of John Carpenter’s 1978 classic but a direct sequel. Writer-director David Gordon Green and co-scripters Danny McBride and Jeff Fradley elected to ignore the umpteen assorted Halloween follow-ups that appeared in the 40-year interim and were drawing a direct line from the original to this latest picture. The word was that this one was going to be better, brainier and brawnier than what were now being dismissed as irrelevant pretenders to the throne.

That, at any rate, was the studio-sanctioned decree, eventually swallowed hype, line and sinker by those who were ready (for a new Halloween flick), willing (to overlook its ample flaws), and able (to cut it reams of slack). But the reality is that this new picture is really no different from all the other inferior slasher sequels that have shuffled through theaters over the decades. It replaces gravitas with gore, employs too much limp humor, and — worst of all — repeats the exact same beats as most other films of this nature. What’s the point of reviving this franchise if that point is merely to make it as predictable as possible?

Initially, that doesn’t appear to be the case. The opening acts are intriguing and expertly staged, as we first spot Michael Myers, aka The Shape (James Jude Courtney), locked away in a sanitarium — his home ever since he was captured after going on a murderous rampage 40 years ago in his hometown of Haddonfield, Illinois. The only teen left standing from that long-ago bloodbath, Laurie Strode (Jamie Lee Curtis), was permanently affected by her altercation with Michael and has spent her entire life as a survivalist, living in isolation and planning for his eventual return. This has caused a rift between Laurie and her daughter Karen (Judy Greer), although she maintains a measure of a relationship with her teenage granddaughter Allyson (Andi Matichak).

It’s decided that Michael and his fellow inmates will be transported to another facility via bus, and it’s ascertained that the best time to do that would be right before Halloween (since, you know, Arbor Day and Columbus Day don’t have the same ring as a movie moniker). Of course, the bus crashes and Michael escapes to nearby Haddonfield, with the twin goals of killing as many people as possible and having his final confrontation with Laurie.

For a good while, the movie appears to be offering something different. Yet it’s ironically after the scene in which Michael again dons his iconic mask (hardly a spoiler; did you think he was going to opt for Groucho Marx glasses this time around?) that Halloween loses its own identity. From here, the picture plays out in wholly expected and unsurprising ways, with the various players getting garroted in the usual pecking order. (Admittedly, there’s one character who unexpectedly survives: an arrogant, self-absorbed abuser who we actually want to see filleted. Then again, in this age of Kavanagh, maybe it’s not surprising that the male filmmakers felt sympathy and elected to spare him.) 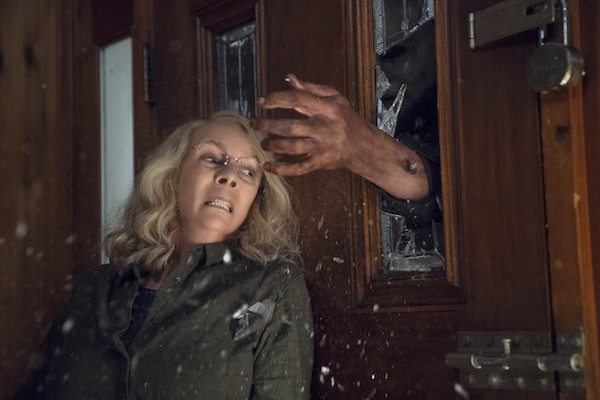 After roughly an hour of unrelenting tedium, the picture rallies for a robust finale, although its message of strength in family unity takes a hit when one remembers who’s (predictably) laying outside on the front lawn. Indeed, storytelling sloppiness and mixed messages permeate this film, which not only introduces plot threads before abruptly abandoning them but also allows precious few characters to gain a foothold in a way comparable to the manner in which Carpenter allowed us to get to know Laurie and her friends back in 1978. In fact, Laurie herself is perhaps the biggest casualty here. Curtis should have been allowed to own this picture, in much the same fashion as Sigourney Weaver owned Aliens and (sorry, Arnie) Linda Hamilton owned Terminator 2: Judgment Day. Instead, her Laurie appears far less than expected/desired and is painted in broad strokes. Ultimately, Laurie Strode is even more of a shadowy figure than Michael Myers, the difference being that he’s supposed to be this spectral cypher.

Merely mediocre on its own terms, Halloween pales even further since it’s coming in the midst of a 21st century renaissance of horror. After such exquisite and unique works as Get Out, The Descent, Pan’s Labyrinth, The Orphanage, etc., it’s baffling to imagine anyone other than easy-to-please fanboys would find anything exciting about something so rote and redundant. In many ways, it’s the perfect bookend piece to this season’s The Predator, another movie that hoped to trade on fond memories of the original but instead suggested that it’s best to let sleeping cash cows lie.

There are a couple of nice throwbacks to the original Halloween — specifically, the disappearing body on the ground and those closet doors. And it was a sweet move to allow Nick Castle, who played The Shape in 1978, to don the Shatner mask again for one scene. But the best part of this new and not improved Halloween? That would of course be Carpenter’s score — the same one employed back in ‘78 but with a few minor alterations to make it even more robust. Carpenter has always excelled with his soundtracks — is it blasphemy to suggest that he was often a better composer than director? – and the one he created for Halloween remains his best (although cases can certainly be made for Escape from New York and Assault on Precinct 13). His Halloween theme is not only the perfect music for a horror movie, it’s arguably powerful enough to layer an unnerving mood over any movie, be it Babe, Book Club, or even Rainbow Brite and the Star Stealer.