Fright flicks arrive in time for the haunted holiday

Earlier this week, in the regularly scheduled View From The Couch column, we dispensed with the new non-horror titles hitting Blu-ray and DVD, movies such as My Fair Lady, Paper Towns and Pixels (the last being a horror film in a different capacity, but I digress). Now it's time to check out the flicks we really want to see this time of year, those fantasy yarns that can only enhance the Halloween experience. But which of these new releases are worth perusing? Here's a rundown, in preferential order.

SPECIAL EFFECTS COLLECTION (1933-1954). As someone who will always prefer old-school visual effects to modern-day CGI, I'm particularly taken by this quote from Steven Spielberg: "If somebody put out George Pal's War of the Worlds and took the strings off the machines, I'd be very upset. When that machine crashes in downtown Hollywood, and you see the strings going from taut to slack, that's the thing that allows me to both understand this movie is scaring the hell out of me and at the same time this movie is a creation of the human race." Those who appreciate the sentiments behind that soundbite will love Warner's new box set, which contains four genre staples showcasing glorious, hands-on effects. The best of the bunch is Them! (1954), arguably (inarguably?) the greatest of the countless "giant creature" movies that flooded theaters during the 1950s. The title refers to ants mutated via atomic testing, and a strong cast (James Whitmore, James Arness and Edmund Gwenn), taut direction by Gordon Douglas, an intelligent and involving screenplay, and Oscar-nominated visual effects combine to make this a genuine classic. 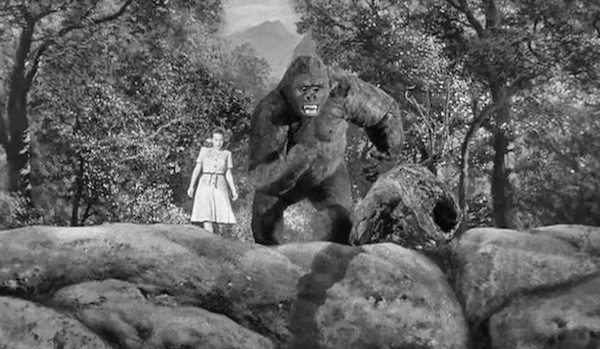 "Presented" by no less than John Ford, Mighty Joe Young (1949) reunited the key personnel from 1933's King Kong — Merian C. Cooper, Ernest B. Schoedsack and Willis O'Brien — for another story about an ape run amok. Comparatively more benign than Kong but still a dangerous, oversized animal, Joe lives in Africa with his human companion Jill Young (Terry Moore), who's talked into bringing Joe to America by garrulous showman Max O'Hara (Robert Armstrong, basically essaying the same type of role he played in Kong). Between a lengthy chase and a devastating fire, the final half-hour delivers the goods, and O'Brien (assisted by Ray Harryhausen) earned the Best Special Effects Oscar for his efforts. The work of Harryhausen is front and center in The Beast from 20,000 Fathoms (1953), a solid effort based on Ray Bradbury's short story "The Fog Horn." In this one, a dinosaur is freed by an atomic explosion from the Arctic ice and proceeds to destroy everything in its path as it heads toward New York City. Finally, The Son of Kong (1933) is a likable but wholly unnecessary sequel to King Kong, released in the same year to immediately capitalize on its predecessor's massive success. Armstrong returns as exhibitor Carl Denham, who heads back to Skull Island and makes friends with Kong's adorable offspring.

Blu-ray extras include audio commentary on Mighty Joe Young by Harryhausen, Moore and special effects artist Ken Ralston; a discussion with Harryhausen and Bradbury on The Beast from 20,000 Fathoms; behind-the-scenes footage on Them!; and theatrical trailers for all four movies. 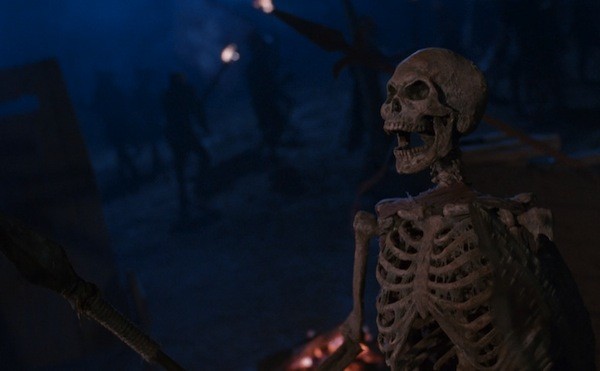 ARMY OF DARKNESS (1993). Only a primitive screwhead would find zero entertainment value in the third Evil Dead movie from director Sam Raimi, producer Robert Tapert and star Bruce Campbell. Whereas Evil Dead II was basically a tongue-in-bloody-cheek remake/continuation of the series-best The Evil Dead, this entry builds on the ending of Part Deux and takes off in its own loony direction. Our hero Ash (Campbell) finds himself back in the Dark Ages (The Medieval Dead was suggested as the title, which would have been groovy), where he battles all manner of monsters, including a skeleton army and his own supernatural doppelganger, Bad Ash. With its glorious effects — not to mention a robust Bernard Herrmann-esque score by Joseph LoDuca — this film is first and foremost a tribute to Ray Harryhausen, though Raimi also finds room for shout-outs to William Shakespeare, The Day the Earth Stood Still and especially The Three Stooges.

Shout! Factory's three-disc Blu-ray edition is, in a word, fantastic, containing four versions of the film: the original theatrical cut, the director's cut (with a completely different ending from the original), the international cut, and the television version. Ample extras include audio commentary by Raimi, Campbell and co-writer Ivan Raimi; an excellent 96-minute making-of documentary, featuring new interviews with Campbell, co-star Ted Raimi and many others (but no Sam Raimi); behind-the-scenes footage; and theatrical trailers. 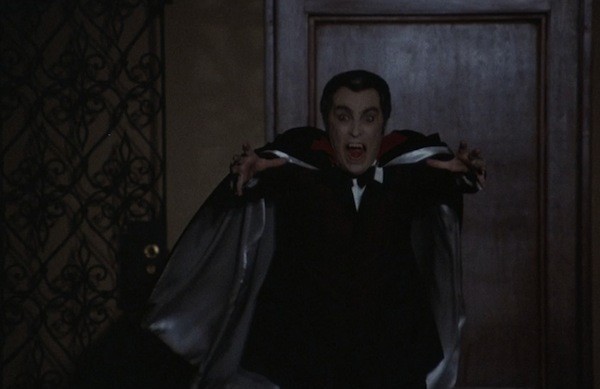 COUNT YORGA, VAMPIRE (1970) / THE RETURN OF COUNT YORGA (1971). Placing an urbane, age-old vampire in an urban, modern setting was a popular device during the horror cycle of the 1970s, with Count Yorga, Vampire prefacing the likes of 1972's Blacula, the same year's Dracula A.D. 1972, 1974's Old Dracula and, later, 1979's Love at First Bite. Originally envisioned as a softcore romp before that angle was nixed, Yorga proved to be a box office hit, with Robert Quarry's suave vampire posing as a medium for the Los Angeles hipsters but more interested in nibbling on the necks of young ladies. Quarry's commanding performance and some offbeat touches make this a worthy fang flick, and its success led to the following year's The Return of Count Yorga. The unusual setting (an orphanage) is a nice touch — and fans of Craig T. Nelson can catch him in his film debut — but too many narrative and stylistic choices echo those from the first picture (including the final twist/freeze frame).

How nice is it that both Yorga pics have been released on Blu-ray at the same time, with Twilight Time offering the original and Shout! Factory serving up its sequel? Blu-ray extras on Count Yorga, Vampire include audio commentary by film historians David Del Valle and Tim Sullivan; a reading by Del Valle and Sullivan of a print interview with Quarry; and still galleries. Blu-ray extras on The Return of Count Yorga include audio commentary by film historian Steve Haberman and actor Rudy De Luca (who appears in the film as a detective); a photo gallery; and a TV spot. Note that a photo in the gallery shows Quarry with our Mad Monster Party friend Joe Moe!

STRANGE INVADERS (1983). What's a Halloween without a dash of sci-fi suspense? For that, there's Strange Invaders, an entertaining if only fitfully successful yarn set around Centerville, an Illinois town that's been inhabited by aliens for the past quarter-century. Diana Scarwid, perhaps second only to Ali MacGraw as the worst actress to ever nab an Oscar nomination (indeed, her work on this film netted her a Razzie nom), appears as Margaret, who tells her husband, New York college professor Charles Bigelow (Paul Le Mat, American Graffiti's hot-rodder John Milner), that she's headed to Centerville for her mother's funeral; when she never returns, Charles sets off in search of her, eventually assisted in his efforts by a gossip-rag reporter (Nancy Allen) and an asylum inmate (Michael Lerner) whose life was destroyed by the imposing extra-terrestrials. The zippy script by Michael Laughlin and future Oscar winner Bill Condon (Gods and Monsters) is better than Laughlin's often lethargic direction, but the makeup and effects work remains eye-popping throughout.

Blu-ray extras consist of audio commentary by Laughlin and Condon; the theatrical trailer; and an isolated track of John Addison's score. 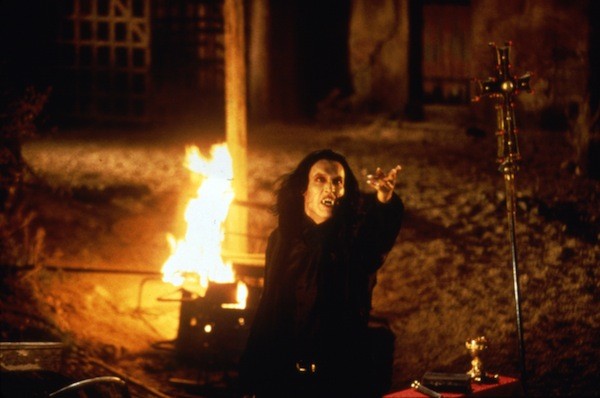 VAMPIRES (1998). Before his career flamed out with 2001's truly awful Ghosts of Mars, John Carpenter spent the 1990s helming only five films, three of which proved to be colossal bombs (for the record, they were Memoirs of an Invisible Man, Escape from L.A. and the woeful Village of the Damned remake). Vampires (aka John Carpenter's Vampires) was one of the lucky(?) pair — the other being In the Mouth of Madness — that broke even by grossing exactly what it cost. In the annals of bloodsucker cinema, the picture isn't anything special, but by the standards of late-career Carpenter, we'll take what we can get. James Woods is typically intense as Jack Crow, the leader of a team of he-men commissioned by the Vatican to wipe out all pockets of vampires that exist around the country (similar outfits operate elsewhere in the world). But Jack has never before encountered a creature like Jan Valek (Thomas Ian Griffith), a master vampire seeking an ancient relic that will allow him to move about freely in the daytime. The story (based on John Steakley's novel) offers some intriguing ideas, but it's hard to muster up much sympathy or emotion when the humans are as repellent as those they slay. Sheryl Lee, Twin Peaks' Laura Palmer, does remarkably well with her paper-thin role as a bite victim who holds the key to Valek's potential downfall.

Blu-ray extras include audio commentary by Carpenter; a making-of piece; and the theatrical trailer.

SCREAM AND SCREAM AGAIN (1970). A movie that offered the titanic teaming of horror superstars Vincent Price, Christopher Lee and Peter Cushing should have been a classic; instead, we're saddled with this sloppy and mean-spirited endeavor. What's more, Cushing is on-screen for less than five minutes while Lee appears only fleetingly throughout, leaving Price (who himself is MIA for huge chunks) to carry the load. Price plays a scientist who may or may not have any involvement with a madman (Michael Gothard, later to play Bond villain Locque in 1981's For Your Eyes Only) bent on murdering London lovelies — meanwhile, in another part of the world (and plot), a fascist (Marshall Jones) with a Spock-like death grip is making his way up through the ranks of a neo-Nazi (or Communist? It really doesn't matter) military organization. Cushing appears ever-so-briefly as a high-ranking officer, while Lee plays a dapper British government suit. The movie deserves points for chutzpah but not for much else. As for the three stars, they would all share billing only once more, for 1983's House of the Long Shadows (reviewed a couple of months ago here).

Blu-ray extras include audio commentary by film historians David Del Valle and Tim Sullivan; a piece on director Gordon Hessler's career at American International Pictures; an interview with Uta Levka (who plays a nasty nurse); and the theatrical trailer (which misidentifies Marshall Jones as Peter Cushing!).

THE DEADLY BEES (1966). One of my favorite so-bad-it's-awesome-to-watch movies — up there with Starcrash and a few others — is 1978's The Swarm, the Irwin Allen mega-bomb in which Michael Caine and an all-star cast face off against killer bees. By comparison, The Deadly Bees is too inert and too joyless to withstand multiple viewings — although it did receive the prime Mystery Science Theater 3000 treatment in 1998. I have yet to catch that episode, though I imagine it provides the necessary entertainment value to a film that on its own proves to be a tedious slog. The script comes courtesy of Robert Bloch, best known for penning the novel upon which Hitchcock's Psycho was based. Don't be too hard to Bloch, as it's been noted that his screenplay — based on H.F. Heard's novel A Taste for Honey and originally designed to serve as a vehicle for Boris Karloff and Christopher Lee — was heavily rewritten without his involvement or consent. What's left is a predictable murder-mystery which posits that someone in a small English village is breeding a strain of lethal bees. All evidence points to the gruff Mr. Hargrove (Guy Doleman), leading visiting pop star Vicki Robbins (Suzanna Leigh) to team up with the kindly Mr. Manfred (Frank Finley in unconvincing makeup meant to make him look older) to crack the case. The special effects surrounding the bee attacks are poor, and the climactic twist shouldn't fool anyone over the age of 12.