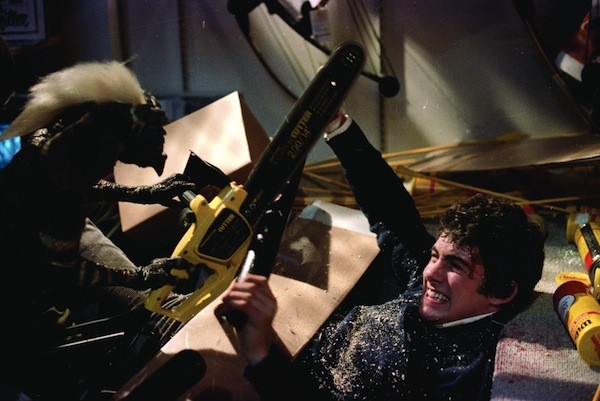 GREMLINS (1984) / GREMLINS 2: THE NEW BATCH (1990). Prior to 1984, the PG-13 rating didn't exist; it took two violent films from that summer — both involving Steven Spielberg — for folks to decide that a new rating needed to exist between the family-friendly PG and the more restrictive R. One of the controversial movies was the Spielberg-directed Indiana Jones and the Temple of Doom; the other was the Spielberg-produced Gremlins. The latter proved popular enough to be followed in 1990 by a sequel ... rated PG-13, of course. Gremlins 2: The New Batch has just been released on Blu-ray, also leading to a new push for Gremlins (first released on Blu-ray in 2009). I greatly enjoyed Gremlins in '84 (and on a pair of subsequent revisits) and was underwhelmed by Part 2 in '90; watching them both again now, one has slightly risen while the other has precipitously dropped, meaning they now appear comparable — and comparably middling.

Ranking only under Beverly Hills Cop, Ghostbusters and Indiana Jones and the Temple of Doom at the 1984 box office, Gremlins proved enormously popular despite — or because of — the surrounding controversy. It certainly displays a nasty streak, although that's not one of its problems. The central critter is a post-Ewok furball named Gizmo, who enjoys his life with his new owner Billy (Zach Galligan) even though Billy is incapable of following the three golden rules: Never expose Gizmo to direct sunlight, never get him wet, and never feed him after midnight. The penalty for breaking these directives is the unexpected arrival of wicked creatures who have a taste for mayhem and murder. The visual effects are imaginative, the in-jokes are delivered fast and furious (best one: the movie marquee advertising Watch the Skies and A Boy's Life, the working titles for Close Encounters of the Third Kind and E.T.: The Extra-Terrestrial respectively), former Roger Corman vet Dick Miller has a juicy supporting role as a drunken xenophobe, and Phoebe Cates (as Billy's girlfriend) delivers a chilling speech about why she hates Christmas. But despite the scattered pleasures, the jokey tone too often throws the entire film off, and Galligan and Cates (and, yes, Gizmo) are rather bland leads. 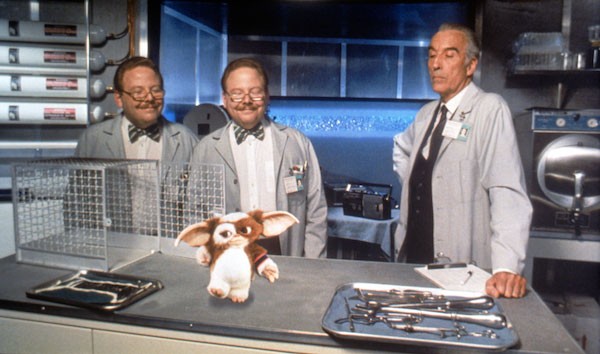 Due to Dante's initial reluctance to return to helm a sequel, Gremlins 2: The New Batch didn't appear until six years later (rather than the usual three-year difference), which might help explain why it was a flop compared to its predecessor. This time, the title terrors create a ruckus inside a New York City skyscraper owned by a Ted Turner-like media mogul (John Glover). Galligan, Cates and Miller all return, but it would be unfair to dismiss this follow-up as more of the same — instead, in addition to being peppered with savvy in-jokes (most obscure: I Am a Camera), the movie itself plays like one long in-joke, with unexpected appearances by the Looney Tunes gang, film critic Leonard Maltin on hand to bash the original Gremlins until attacked by gremlins himself (shamelessly, he gives this sequel three stars in his annual Movie Guide, as opposed to two stars for the first flick), and the film appearing to break due to the creatures' shenanigans (luckily, Hulk Hogan is on hand to save the day). Any movie with former Dracula Christopher Lee as a scientist who creates a gremlin-bat can't be all bad, but there's a reason we never received a Gremlins 3. 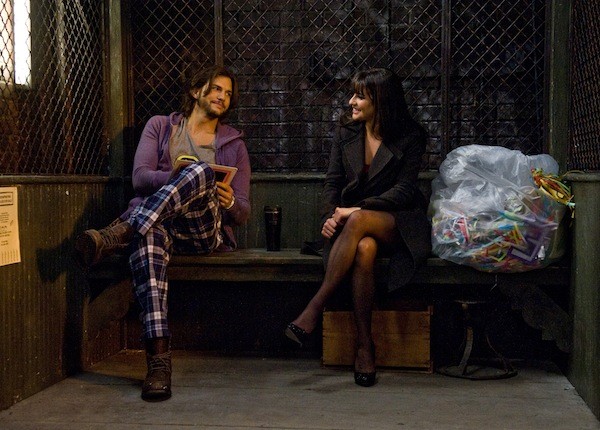 NEW YEAR'S EVE (2011). This waste of energy proves to be even tougher to take than director Garry Marshall's previous all-star holiday romp, Valentine's Day. As in that film, numerous familiar faces take part in superficial vignettes all centered around the title holiday. Although it squanders any intriguing potential for a May-December romance, the storyline in which a cocky messenger boy (Zac Efron) helps a depressed woman (Michelle Pfeiffer) fulfill her New Year's resolutions is the best episode; that's primarily due to Pfeiffer, the only person in this entire film investing any genuine emotion into her character. At the other end of the spectrum is the thread in which two pregnant women (Jessica Biel and Sarah Paulson) and their husbands (Seth Meyers and Til Schweiger) are eager to win the sizable cash prize given by a local hospital to the couple who produces the first baby of the new year; this is the most godawful of all the segments, and not just because someone yells out, "May the best vajayjay win!" Among the other less-than-scintillating tales are a real snoozer in which a sympathetic nurse (slumming Oscar winner Halle Berry) tends to a dying man (slumming Oscar winner Robert De Niro) whose only wish is to see the ball drop; the dramatically inert episode about a glitch in the Times Square ball, made watchable only by the likable turns by Hilary Swank, Hector Elizondo and Chris "Ludacris" Bridges; a piece in which a slacker (perpetually annoying Ashton Kutcher) who hates the holiday is trapped in an elevator with a singer (Lea Michele) desperate to escape; and a piece in which a caterer (perpetually annoying Katherine Heigl) is angry at the ex-boyfriend (Jon Bon Jovi) who has now reentered her life. I can hardly wait for Marshall's Arbor Day.

Blu-ray extras include audio commentary by Marshall; deleted scenes; a gag reel; two featurettes in which cast members discuss Times Square and New Year's Eve; and a piece on the musical contributions by Bon Jovi and Michele to the film. 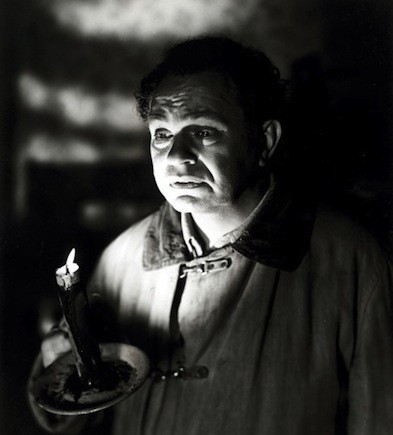 THE RED HOUSE (1947). Gotta say, I'm really digging what the Film Chest home video company has been doing with public domain titles that have repeatedly appeared on awful-looking and awful-sounding DVDs — namely, polishing them up and plopping them on Blu-ray in remastered editions. On the heels of applying this treatment to (among others) Orson Welles' The Stranger and Roger Corman's The Terror, the outfit has now breathed new life into The Red House, a film noir curio starring the great Edward G. Robinson. He headlines as Pete Morgan, who lives on a modest farm with his sister Ellen (Judith Anderson) and his adopted daughter Meg (Allene Roberts). Pete has always warned Meg to stay away from the forest located on their property, particularly the red house that's buried deep within it; she's always obeyed until her classmate Nath (Lon McCallister) snags a job at the farm and decides he won't rest until he uncovers the mystery behind Pete's paranoia. This isn't a noir in the traditional sense, but it boasts enough ingredients to pass as one — these include the superb, shadow-saturated camerawork by Bert Glennon and a femme fatale of sorts in Nath's mischievous girlfriend Tibby (21-year-old Julie London, a quarter-century before she became a household name via her role as nurse Dixie McCall on TV's Emergency!).

Blu-ray extras include audio commentary by film historian William Hare; a "before & after" restoration demo; and the theatrical trailer. 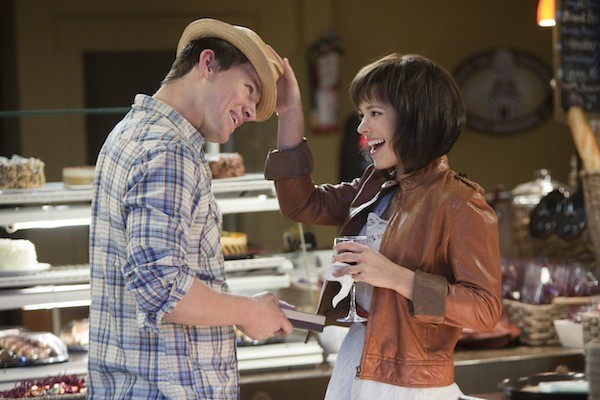 THE VOW (2012). Between The Vow and 21 Jump Street, Channing Tatum has demonstrated his strength as a box office draw, but his best shot at being taken completely as an actor would be to only make movies with Rachel McAdams for the rest of his life. A fine performer with a vulnerable and disarming beauty, McAdams has previously been romantically linked on screen to Ryan Gosling, James Marsden and Owen Wilson (among others), but it's no major feat to generate chemistry with talented guys like these. But to strike cinematic sparks with a limited stud like Tatum not only requires skill on McAdams' part, it also demands that her co-star somewhat rise to her level. And when The Vow works, it's almost always because of the give-and-take dynamics between the pair. Based on a true story, this centers on Paige and Leo, a madly-in-love married couple whose lives change drastically after Paige loses much of her memory in a car accident. She can remember her life before Leo — her wealthy, right-wing parents (Jessica Lange and Sam Neill), her circle of sorority-sister friends, her slick fiancé (Scott Speedman), her interest in attending law school — but she can't remember anything afterward. That would encompass her career in sculpture, her liberal world view, her switch from carnivore to vegetarian, and, oh yeah, the fact that she has a husband. Thus, it's up to Leo to insure that they get reacquainted, but Claire's having a hard time falling in love with him this time around, as the comfort and security of her life at home are more reassuring to her than sharing an apartment with this perfect stranger. Although McAdams gives the more fully rounded performance, it's Tatum's character who earns the majority of our sympathies, and the actor does just enough right to guarantee our allegiance to his cause. The scenes in which he tries to connect with his equally frustrated wife are the best in the film, and once the story moves past this and settles on Paige's betrayals by those from her past, it gets bogged down in mopey melodrama and never quite recovers. Still, for those seeking out a love story that doesn't insult the head or the heart through shameless manipulation, the sweetly sincere The Vow mostly fulfills its promise.