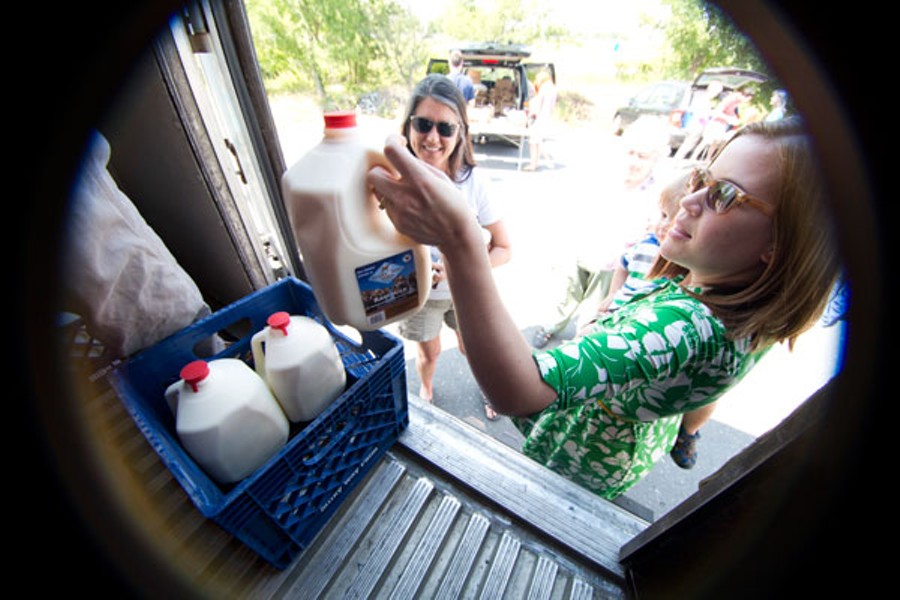 I'm sitting in a South Carolina parking lot with my kids in the backseat, waiting to buy an illegal substance off the back of a truck.

The lot sits behind a seemingly ill-conceived combination fireworks shop and gas station and is empty at this midmorning hour, sunlight glinting off water pooled in deep potholes. It's nearly silent, save for the periodic snap of tattered American flags in the breeze and the Eli Young Band warbling something about a "crazy girl" through a tinny loudspeaker over the gas pumps. Then, all at once, the place rumbles to life. A rattling refrigerated truck pulls in, closely followed by SUVs towing trailers and a few straggling minivans. My dealer is here.

L.D. Peeler is the third-generation owner of Milky Way Farm in Starr, South Carolina, and he's here once a week to distribute his product: raw, unpasteurized milk from his herd of grass-fed Jersey cows. He's chosen this parking lot not for its diesel-tinged ambiance but for its strategic location — it lies inches over the state line, and most of his customers today are North Carolinians who can't legally buy raw milk in their own state.

North Carolina is one of 38 states that does not allow raw milk to be sold in retail stores, and buying and selling raw milk across state lines has been outlawed nationwide since the late 1980s. However, growing interest in the health properties of raw milk, which proponents say can alleviate allergies, asthma and digestive problems, led to a push for laws to limit restrictions on its distribution. The Interstate Milk Freedom Act of 2014, introduced in late March and co-sponsored by Walter Jones (R-N.C.), would lift current FDA restrictions that prohibit all interstate trade involving raw milk — a more-than-grey area that some N.C. residents willingly drift into on their weekly milk runs.

Bob Ansley is one of them, slinging bulky 100-quart coolers from the back of his flatbed trailer while Peeler hands him crate after crate of milk. Ansley will collect 120 gallons today, delivering them to a group of families in the Wilmington area. He began visiting Peeler's farm every three months to buy milk for himself, but interest among friends and neighbors grew so quickly in the past two years that he now meets Peeler every three or four weeks. Because milk orders are taken on Milky Way Farm's website and money is exchanged on South Carolina turf, Ansley hasn't run into trouble yet — but he's still a little nervous. "We don't want to throw things in the face of the law," until friendlier legislation is passed, he says. He quickly scoops buckets of ice over his creamy contraband; others like him have allegedly been targeted by the FDA.

In 2009, South Carolina raw milk bound for a Georgia buyer's club similar to Ansley's — Georgia also prohibits the sale of raw milk, and, like North Carolinians, many in the state count South Carolina as their closest legal source — was seized by Georgia Department of Agriculture agents, despite the milk having been ordered online with South Carolina farmer Eric Wagoner. Wagoner said agents told him "it's illegal to cross state lines to distribute raw milk — and distribute is the key word." Buyers were forced to pour the milk out into the grass while agents looked on. The Farm-to-Consumer Legal Defense Fund, a nonprofit serving the interests of family farms, said in a statement following the raid that Georgia authorities were spurred on by the FDA, since it is neither illegal to personally consume raw milk in Georgia nor to purchase it from South Carolina.

The Interstate Milk Freedom Act, currently being reviewed by congressional committee, would eliminate the "distribute" sticking point in between. It could also ease the hair-trigger FDA response that a local dairy said threatened its family farm.

In 2011, the FDA warned consumers in a press release not to drink milk from Tucker Adkins Dairy, in York, South Carolina, because "three confirmed cases and five probable cases of campylobacteriosis" — an infection that causes diarrhea, fever and stomach pain — discovered in the Charlotte area were thought by the FDA to be associated with the dairy's raw milk.

But state inspectors did not find campylobacteria at the dairy or in the milk samples taken from the individuals, nor did the FDA investigate other potential common sources among those sickened. If they did, their findings were never publicized.

And Carolyn Adkins, whose family owns the farm, says the FDA never publicized the negative results.

"They want to misconstrue the law, usually to make a small dairy look bad," says Adkins. She believes limited-scale, quality-over-quantity operations like hers threaten the Carolinas' dairy status quo — the average North Carolina dairy keeps 160 cows producing nearly six gallons of milk each per day, most of which do not go directly to consumers but to processing and distribution facilities owned by Dean Foods, Harris Teeter and Ingles, according to the North Carolina Dairy Producers Association.

By contrast, Adkins gets a gallon or two per day from the 27 cows currently producing in her 60-head herd and sells milk straight to individuals.

With the state's last milking herd of Guernsey cows — known as the only cows that produce beta carotene in their milk, and a breed in serious decline worldwide — the farm has become so popular with Charlotte-area customers that Adkins keeps a waiting list.

"There's a big underground community in Charlotte of people that seek out these farms that raise cattle properly," says Carolyn Erickson, who teaches classes on traditional nutrition in Charlotte primarily at Atherton Mill and Market and encourages students to source milk from Tucker Adkins. Even so, Adkins says her business still hasn't recovered from FDA accusations that she says had no basis in fact.

"If you go to the doctor and you're sick with this kind of bacteria, you can list 100 other things you were exposed to, and the doctor will say the raw milk has to be the problem," says Adkins. South Carolina dairies like Adkins' are tested for contamination each month by law, and state-conducted inspections immediately before and after the reported illnesses were negative for all contaminants.

But frequent inspections aren't enough to eliminate the "vector for disease" that raw milk creates, according to N.C. State University dairy enterprise director Gary Cartwright, to whom the state's Food and Drug Protection division referred me for my dairy-industry inquiries. He says a decline in foodborne illnesses following the start of routine pasteurization in the early 20th century lulled consumers into thinking milk isn't inherently risky. "We're victims of our own success. The safety we created [with pasteurization] is causing people to rethink the value of pasteurization, opening up the potential for major public health issues."

A 2012 report released by the Centers for Disease Control said that the rate of foodborne illness outbreaks caused by raw milk was 150 times greater than outbreaks linked to pasteurized milk. Sally Fallon, president of the Weston A. Price Foundation, which advocates for whole foods including raw milk, says the CDC "cherry picked" the data in the report, and that "the incidence of foodborne illnesses from dairy products, whether pasteurized or not, is extremely low. There needs to be oversight and farmers need to take safety and cleanliness seriously, but there is no reason to single out raw milk as inherently dangerous." Fallon says the report included illnesses attributed to dairy products without a known pasteurization status, and says that for products with confirmed pasteurization statuses for the 14-year period that the report examined, there was an average of 112 illnesses each year attributed to all raw dairy products and 203 associated with pasteurized dairy products. In other words, unregulated, uninspected dairies with subpar safety standards could skew the data.

Fallon's organization believes raw milk can save lives by diminishing conditions like asthma. A 2011 study in the Journal of Allergy and Clinical Immunology found that children who drank raw milk were 41 percent less likely to develop asthma than children who drank pasteurized milk.

Still spooked by the federal threat even though no charges or citations were filed, Adkins refuses to even keep a customer list for fear it could be seized; customers call her cell phone to place orders, pick up their milk from a large refrigerator inside the milking barn, and leave payment in a nondescript lockbox. At most times of the day, the only witnesses to the transaction are a handful of indifferent cows.

But for all its subversion, raw milk at its surface is something of a luxury product — I press seven folded dollar bills into Peeler's palm for my parking lot jug, while the blinking red sign over the convenience store next door advertises "2% Milk, $3.50/gallon."

"For our family, on a tight budget, it is money better spent even though the cost is double," says Kate Bach, who formed a co-op with other families in the Charlotte area to take turns driving to a North Carolina dairy to pick up raw milk, which they quietly purchase as "pet food." "I could pay $3 a gallon for something containing less nutrition than water, or I can pay over twice that much for a whole food."

Regarding the loophole she uses to purchase raw milk, Bach says coyly, "If a person chooses to drink milk bought for their pets, that is their choice."

The cold gallon strapped into my passenger seat as a green highway sign welcomes me back into North Carolina could either save my life or kill me, depending on whether you ask Fallon or Cartwright. For some, that's not even the point. "We support what ought to be everyone's right," says Bach, "to buy food from wherever they choose."