Antifolker re-emerges with an unlikely hit

The commercial is in Spanish, but its message is universal. A printer spits out an image of our planet, and a mother hands the picture to her son. Through successive pictures, we see the boy grow to manhood, eventually handing an identical image of the earth to his son. The TV spot may be obvious, but the music helps it carry emotional weight.

With stark simplicity, the guitar-and-voice song encapsulates the bittersweet wheel of life, with all its doubt, compassion and yearning for acceptance. Grey Revell's heartfelt folk ballad, "Gone Gone," has helped the TV spot become globally successful, and put Revell's music on the world stage. 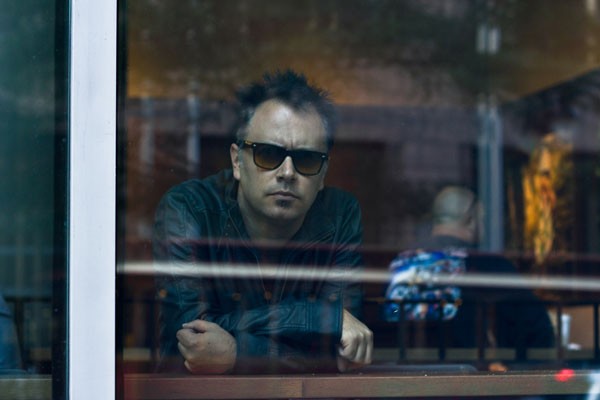 The Concord-based singer/songwriter penned and recorded the song in 1999, when he was part of the New York antifolk scene, the ragtag group of punk- and indie-inspired folkies that has spawned artists from Beck to Regina Spektor, Kimya Dawson of The Moldy Peaches and Revell's friend Paleface, who is also now based in Concord. Revell never achieved the commercial success that some of his fellow antifolk scenesters have enjoyed, but licensing of "Gone Gone" by Hewlett-Packard has now brought him unexpected international attention. "It's funny. It's like watching a weather system," he says. "Interest in the song has calmed down in Latin America, but now it's percolating out there in the Ukraine and Eastern Europe."

Revell, who will be the featured artist at the Feb. 4 Evening Muse open mic, has been making heartfelt and challenging music ever since his antifolk days. After moving to New Orleans, he recorded Little Animals, an atmospheric and ominous snapshot of the Crescent City. Finishing the album just weeks before Katrina struck, Revell relocated to Charlotte.

These days, he offers his considerable playing and record production skills to local musicians, including Case Federal, Perry Fowler's Sinners & Saints and Zoe Vette and the Revolvers. In November 2012, Revell released his first set of new material in several years, I Don't Leave Friends in Darkened Houses. Looking back at his career, he says with a laugh, "Through the machinations of the universe, it somehow all fell together."

The title track of Darkened Houses breaks new ground, even for an artist accustomed to stepping off into the unknown. Mixing Ennio Morricone-influenced horns into the song's wide-screen spaghetti western palette, Revell says he wanted to experiment with language and identity, "weaving Spanish and English seamlessly into one language, sometimes in the space of a single line. I wanted to incorporate the Latin influence into the American landscape in a way that illustrates that it is as much a part of America as anything else."

Growing up in the Los Angeles bedroom community of Corvina, he was aware of his family's Latino roots. "My mother is Cuban, so I would hear Latin music," Revell remembers. A growing love of The Beatles and Brian Eno convinced Revell to try a music career. With dreams fueled by Miles Davis's autobiography and the classic Television album Marquee Moon, Revell hopped a Greyhound to New York.

The singer recalls going to his first open mic at the Sidewalk Cafe, ground zero for New York's antifolk scene. "I sat there waiting to go on, thinking, 'I've got this wired,'" Revell remembers.

Jeffery Lewis, the noted comic book artist, New York Times contributor and a fellow antifolk musician, recalls seeing Revell perform early on. "Grey had a certain dark magnetism and charisma," Lewis says. "He made a kind of music that obviously should exist, and you could never quite figure out why it hadn't already existed. It just really worked and was very original."

Revell went from strength to strength artistically, and forged lasting friendships. Like Dawson, whose Moldy Peaches scored an unlikely mainstream success with the spare and twee "Anyone Else but You," from the soundtrack to the 2007 movie Juno. "We would sit around in small groups and play each other whatever we had been working on," Dawson says of the close-knit antifolk scene. "Even though Grey was a super-gifted musician, it has always impressed me that behind all that, he was kind and open and dorky — like me."

The self-supporting scene that centered on the Sidewalk Cafe couldn't last forever. As Revell says, with a family to support, it was time for him to stop being Peter Pan and find a day job. Though he continued to make music, a series of ups and downs and cross-country moves landed him in the Queen City.

Then "Gone Gone" blew up big. Tracing the unlikely success of a 13-year-old ballad — in much the same way the Moldy Peaches' 2001 song didn't gain real traction until six years later — brings us back full-circle to the turn of the 21st century and the epicenter of the antifolk scene in Charlotte. Years before the national spotlight trained on the Moldy Peaches, Dawson and her band mate Adam Green curated a 2002 antifolk compilation CD highlighting the scene's leading players. Dawson championed "Gone Gone" for a spot on the tracklist. "It was a top pick," she recalls, "a no-brainer."

So what connects the dots between a 2002 CD compilation released in Europe only and a 2012 Hewlett-Packard campaign? "What I've been told," says Revell, "is that HP approached a French film director to do their commercial. As a kid, that director had got ahold of that CD and fell in love with my song." As a consequence, the director signed on to do the spot, but only if he could use Revell's song.

The singer smiles in disbelief. "You can't plan stuff like that."