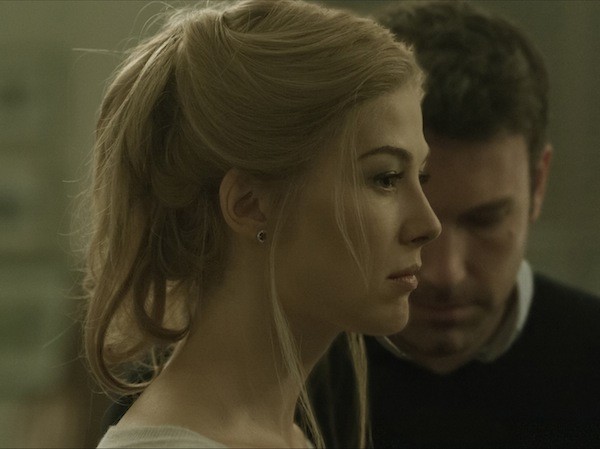 Until it jumps the tracks as it approaches that final bend, this adaptation of Gillian Flynn's mammoth bestseller — scripted by no less than the author herself — is as riveting as anything I've seen in theaters these past nine months. It's the sort of twisty thriller that needs to be described with the utmost care, lest any spoilers inadvertently make their way to the surface. But it's safe to reveal what's basically exposed in the trailer, so here goes. Amy Dunne (Rosamund Pike), a popular children's book author and the wife of Nick Dunne (Ben Affleck), has vanished into thin air. No, she wasn't sucked into the events of Left Behind (see that review for clarification), but it's unclear exactly what happened to her. As Ben tells the investigators, Detective Rhonda Boney (Kim Dickens) and Officer Jim Gilpin (Patrick Fugit), he came home to find signs of a struggle in the living room. The police one-up him by finding lots of blood — Amy's blood — mopped up from the kitchen floor. Nick and Amy's parents (David Clennon and Lisa Banes) spearhead the search while the police gather more evidence, but something about Nick's behavior puts everyone ill at ease: He's not showing as much grief as everyone would like. Just as Australian Lindy "A Dingo ate my baby!" Chamberlain was believed to have murdered her own baby since she wasn't emotional enough in the media spotlight, so too does Nick's reserved behavior lead many to suspect he killed his wife. His allies are few — certainly his twin sister Margo (Carrie Coon), maybe Detective Boney, definitely not the Nancy Grace-like ogre (Missi Pyle) who goes so far as to suggest that not only did Nick murder his wife but he's also a bit too chummy with his own sister ("twincest," someone snickers).

The structure of Gone Girl is unique in that it not only relates the investigation surrounding Amy's disappearance and possible murder, it also employs (via Amy's voiceover) liberal use of the diary that she had been keeping right up until she vanished, ending with the citation that "This man of mine may truly kill me." It's an ingenious back-and-forth dynamic, offering contradictory descriptions of the Dunnes and muddying the mystery waters even further. But just when it seems the film can do no wrong, it does.

Fincher also directed 1999's Fight Club, which was adapted from the book written by Chuck Palahniuk. During my interview with the author on that film's junket, Palahniuk confessed that he had no idea how to continue the novel until it struck him while he was getting a drink from the fridge. Considering the twist was ludicrous, it was no surprise that it came to him in such a lazy, off-handed manner, and I'd like to think that's similarly how Flynn came up with the ending for her novel. I haven't read Gone Girl, but since she wrote both the book and the screenplay, it's likely that both suffer from a turn that's more than just a wee bit risible and farfetched even by the standards of this story. It's a shame, because a stronger third act would clearly have earned this a perch in my year-end Top 10; as it stands, it's relegated to runner-up status.

The movie's male actors — Affleck, Fugit, Tyler Perry as a defense attorney, Neil Patrick Harris as a potential stalker — are uniformly fine, yet this is clearly ladies' night out, with the actresses all doing outstanding work. Coon, a Tony-nominated performer fairly new to film, and Dickens, familiar to fans of Treme and/or Deadwood, were inspired choices to play a pair of intelligent women who are fiercely independent in different ways. As for Pike, I've enjoyed her work since she first caught my eye as Miranda Frost in the 007 entry Die Another Day (her film debut); 12 years later, her absorbing work in Gone Girl might end up being her Sharon Stone-like breakthrough. It's about time.