Ghost in the Shell is a vibrant enhancement

GHOST IN THE SHELL
*** (out of four)
DIRECTED BY Rupert Sanders
STARS Scarlett Johansson, Michael Pitt 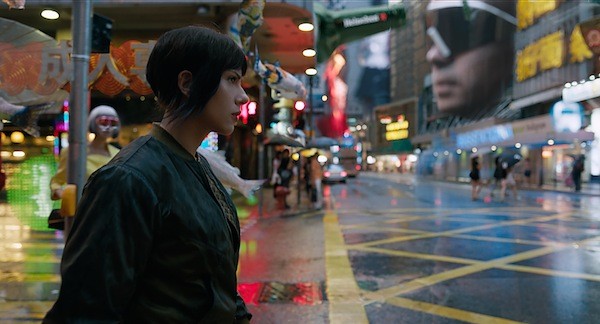 It’s reached a point where CGI is so been-there-done-that, it’s hard to ever locate anything new in Hollywood’s oversized slate of fantasy flicks. But then here comes Ghost in the Shell, with its stream of images that manage to be at once familiar and revolutionary. While the general aesthetic recalls Blade Runner, the particulars bring to mind The Matrix – specifically the manner in which something old, like a gun battle or a mad dash around a room, becomes something new. Simply stated, the visual effects are superb – sometimes chilly, sometimes creepy, but always fascinating to behold.

If visual vibrancy turned out to be the sole positive attribute regarding Ghost in the Shell, that would only be a partial victory. Instead, this adaptation of the popular manga is effective as both an action flick and, more impressively, a sociopolitical piece that casts a wary eye toward the future. The Japanese property created by Masamune Shirow may date back to 1989, but this film version is so very 2017 and beyond.

Scarlett Johansson, no stranger to essaying roles in which the human form (or “shell”) plays a significant part in the proceedings (Under the Skin, Lucy, even Her), stars as The Major, a cyber-enhanced agent for an organization devoted to fighting global terrorism. The Major’s background is murky: Surviving a nautical disaster that killed her immigrant parents, she was selected to have her brain put inside cyborg trappings, so that her human essence remains even as her physical form has been taken to the next level. But this naturally leads to all sorts of questions regarding self-identity and self-worth, and her confusion only grows more paramount after she confronts a cyber-terrorist named Kuze (Michael Pitt), a shadowy figure who’s been assassinating all the top scientists at the corporation which created The Major.

What’s particularly fascinating about the world of Ghost in the Shell is that it appears to be one in which there are no borders or, ahem, walls of any sort – in this future world, complete globalization and a thorough meshing of cultures are already givens, and it doesn’t seem out of place for, say, the head of the antiterrorist outfit (celebrated Japanese star “Beat” Takeshi Kitano) to speak in Japanese to his team members and have them all answer in English. Robotic enhancement also seems to be a wave of the future, with folks receiving upgrades in the same manner as people today pay for tattoos, facelifts, lip enhancement, and the like. In one scene, a character flatly states that he’s happy to be all human while another humorously reveals that he had a liver enhancement solely so he can spend more nights getting drunk. 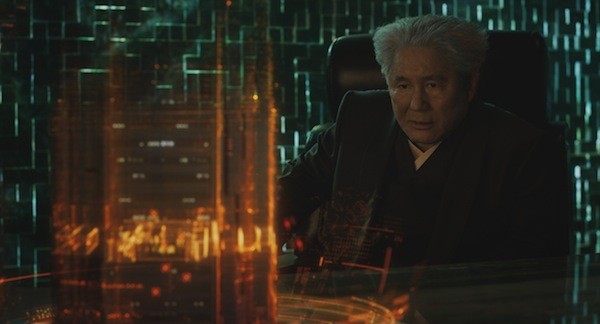 The global theme of Ghost in the Shell also ties directly into the casting of Johansson in the central role. While the makers of the original franchise have endorsed the selection of the actress, many in this country have denounced the choice as yet another example of Hollywood whitewashing. Certainly, as attested by such films as Doctor Strange and Exodus: Gods and Kings, this remains a dire problem, yet that’s not necessarily what’s going on with this picture. Without unleashing any spoilers, let’s just say that the selection of Johansson to play what’s essentially a fabricated being makes sense within the context of the story, and the Japanese roots ultimately are not discarded.

A quick scan of the negative reviews on Rotten Tomatoes reveals that approximately 1,024 of the critics have employed a pull quote stating that the film itself is merely “a shell of a movie.” Given my own proclivity for puns, I would doubtless have followed suit had I similarly seen nothing of merit. Instead, I’ll for once leave the quipping to others and merely note that, for those willing to make the effort to look beneath its surface dazzle, Ghost in the Shell proves to be an unexpectedly intricate and surprisingly humanistic endeavor.