Get Your Weird On

Fascinating tales of the Carolinas 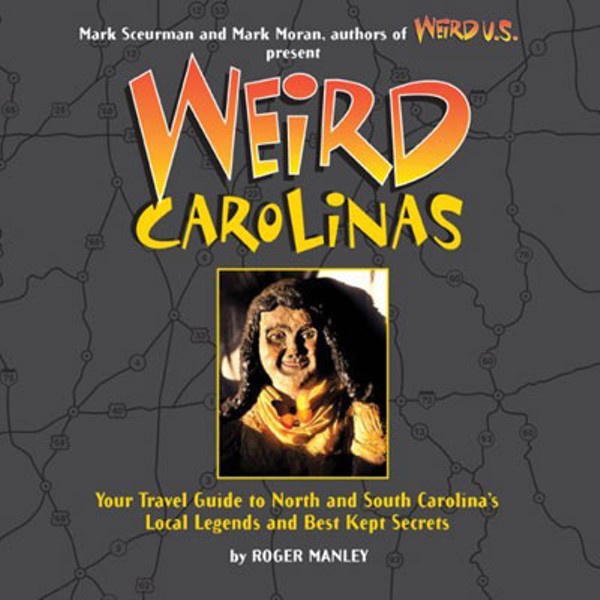 Weird Carolinas is the kind of book that makes me go, "Duh! Wish I'd thought of that!" It's in fact part of a series of books that started with Weird N.J. There are now 15 more (including Weird N.J., Vol. 2) as well as a compendium called Weird U.S. The two guys who did have the idea and followed it through are Mark Moran and Mark Sceurman, who refer to themselves as "The Marks."

In the intro, The Marks write that after they did the New Jersey book and the U.S. version, they "came to the conclusion that this country had more great tales than could be contained in just one book" -- thus inspiring collections for each state. Since they're from New Jersey, we'll forgive them for thinking of North Carolina and South Carolina as one "region." One of my only quibbles with this book is that I think N.C. and S.C. each deserve their own book. On the surface, S.C. may seem slightly weirder than N.C., but I think our state has more depth.

Roger Manley, the author of Weird Carolinas, has strong ties to both states, as he's lived in both North Carolina (and went to college just up the road at Davidson) and South Carolina. Although he calls Paris (yes, the one in France) home these days, he still owns a house in N.C. Manley is the author or co-author of a number of books, including Self-Made Worlds: Visionary Folk Art Environments, which had come to the attention of The Marks. Manley is also an accomplished photographer and award-winning documentary filmmaker. The Marks note Manley has what they call "the Weird Eye" -- that is, an ability to recognize a site or story as "intrinsically unusual" and to convey this to readers.

As a reader and a traveler (and a native who's familiar with a lot of the stories), what I like is having them all collected in one place. There are a number of good collections of ghost stories and legends out there (look for Nancy Roberts' Ghosts of the Carolinas, if you're interested), but Weird Carolinas contains far more than just ghost stories. And while Manley keeps the tone light, he's neither disrespectful nor condescending. In other words, he's as fascinated by his subjects as we are and makes a perfect guide to the weirdness.

With a book like this, you don't have to read straight through. It's rather more fun to randomly scout through the book and read about The Lizard Man of Lee County, then skip over to the story about the Witches of Fairfield, S.C., then bop over to Charlie Yelton's Bottle Farm. Check out pages 166-167: On page 166 is that South of the Border icon, Pedro, and on the facing page is the Peachoid of Gaffney. Gotta love that design work. Review the history of said Peachoid before paging over to refresh your memory about the Brown Mountain Lights, The Lost Colony or the Gray Man of Pawleys Island. Then take the "Cemetery Safari" or read about the Lake Murray Bomber. Who knew about the "Carolina Bays," a series of mysterious elliptical shapes scattered over the Carolinas' coastal plains?

I have a fascination with conjoined twins (Siamese twins) and folks may be familiar with the story of the "original" twins Chang and Eng, once stars of various Barnum enterprises, who settled in the Mount Airy area. But did you also know about the Hilton Sisters? They were featured in Tod Browning's' classic 1932 film Freaks and through a twist of fate spent their last years here in Charlotte.

Southerners, for some reason, probably treasure and nurture "weird" in a way that other parts of the country many not fully understand -- and that includes people, places and things. I'm really glad Manley included lots of people who are passionate and dedicated about one thing or another -- like Pearl Fryar and his fabulous Topiary Garden in Bishopville (see visual arts writer Scott Lucas' feature on Fryar in our Aug. 29 issue) or UFO expert George Fawcett of Lincolnton.

This book may also send you on investigations of your own. One of the very first ghost stories I heard as a child was about the Maco (N.C.) Light -- how train conductor Joe Baldwin lost his head and the light is old Joe looking for it. Since Manley recounts a similar story about a "light" in Vander, N.C., I wondered if there was some confusion about the location. A bit of interesting Internet research later, I found there are a number of different "light" phenomena in the state -- including both of these lights as well as the more famous ones up the mountain.

Charlotte, I realize, isn't much for weird. But this book is fun, interesting and well-written. And you should get out more.