Get into the Groove 8 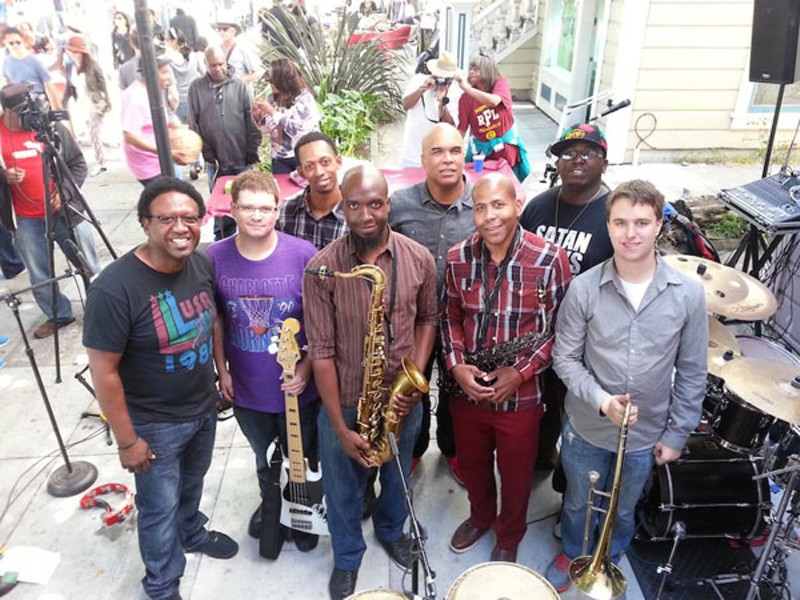 The Charlotte music scene has never been an easy hurdle for instrumental and jazz bands. Not a big enough audience? Possibly. Not a solid jazz venue to call home? Perhaps. Not enough talent? Definitely not.

It's possible some of our readers have already paid big money to see members of the Charlotte instrumental collective Groove 8 perform without even knowing it. Horn players Adrian Crutchfield and Joey Hayfield have been touring with Prince as a part of the New Power Generation. Percussionist Antonio Diaz is set to hit the road with Paul Simon for a few European dates. So, yes, the talent is definitely here.

Groove 8 has been making its own fusion of jazz and funk in the Queen City for a decade. There aren't many bands who can last that long — which is one reason the band is celebrating the milestone with a new album, Decades, and a show at the Visulite Theatre on June 26.

And for Groove 8, eight is the magic number, Diaz says. The band is comprised of three horn players, a drummer, percussionist, bassist, guitarist and keyboardist. They're considered a horn-based band that centers around a few original and core members — Diaz, guitarist Keith Whatley, saxophonist Tony McCullough, keyboardist Derrick Bartell and drummer Audi Jones — and gets filled in by "the family," as Diaz calls it. When Crutchfield and Rayfield are in town, they're sure to play gigs with the band, but when they're on tour, others take their place. This summer, baritone saxophonist Garrett Gaina (Urban Jazz Trio) and bassist Jeff Cuny (Valley Hush), both of Detroit, will fill in open spots with the band.

Diaz, Crutchfield and Rayfield's big-name connections have helped pull plenty of eyes and ears in Groove 8's direction — it's not often that you can find three people touring with national acts who also play in a band of their own. Though while the band has sold out shows in California and been offered spots in numerous festivals, they still might not be household names around Charlotte.

"We've seen some of our peers like Snarky Puppy move on and get a Grammy," Diaz says. "Snarky Puppy's band members — it's their first project and everything else is a side project. Some people don't want to commit to a band that has part-time people in it."

But the individual talent is strong enough to keep them together as a band. What started out as jam sessions in a living room has developed into one of the city's strongest, and few, original instrumental outfits. Their fusion of jazz and funk can quickly win over a crowd, though booking agents and label execs have a hard time finding a place to put them.

"Blue Note Records told us we aren't jazzy enough for jazz and not funky enough for funk," Diaz says. "We aren't sellable for major record labels, but we represent Charlotte really well. Now, we're starting to get asked to play some jam band festivals."

For a musician like Crutchfield who has been touring with Prince and is currently on the road with Bette Midler, Groove 8 provides a fresh creative outlet. While the big name acts provide a bigger paycheck, they have the creative part already taken care of.

It's difficult to practice or record when band members are traveling for other gigs, but technology has helped that. The band members are at work on their fifth studio album, and some of the musicians are simply emailing in their parts to songs.

Next up for the band, after the hometown show, is a stint in California around the Fillmore Jazz Festival. Diaz says they've been to California every year since the band's start and are always amazed at the reception they get.

"We have a bigger following in the Bay Area than we do in Charlotte," Diaz says. "We do the same six shows every year. We play on the street in the afternoon so people know where we'll be at night. The first year, we had hundreds of people watching us play in front of a book store and sold out of all of our merch."

Diaz, who himself was offered a backup musician spot with Fleetwood Mac, says that unpredictable schedules are the toughest part of keeping the band together. That, and staying strong in Charlotte's tough hometown market.

"I've been very critical of Charlotte because I see the potential of it being a musical hub for the world," Crutchfield says. "There's so much music coming out of the Carolinas. It's sad that we have to leave to get work. They want to claim you when you've proven yourself to the world, but we need support to get to that level. It'll happen — it will just take time."