Most folks have a tendency to use either the analytical and orderly "left brain" or the artistic, imaginative "right brain." It's safe to say Georgie Nakima gets good use out of both sides. 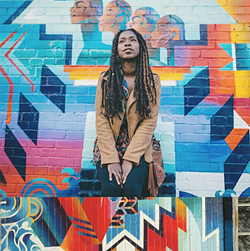 The Charlotte muralist and self-proclaimed math nerd holds a degree in biology from Winston-Salem State University, where she also minored in chemistry, and it shows in her work. Her paintings feature geometric patterns and symmetrical shapes that move the viewer's eyes through the piece at her direction.

Her love of science is also apparent in her inclusion of animals in many of her pieces, which she says is her way of calling attention to environmental injustice and animal rights.

We caught up with Nakima recently to discuss these things and also chat about her most recent collaborative project, currently taking shape in the Five Points area in west Charlotte, and how it involves giving back to the community.

Creative Loafing: Your educational background would suggest a passion for science. How does that play a role in your art?

Georgie Nakima: It played a lot into, philosophically, how I view the world, because you're able to deconstruct the layers beyond what you see physically. It's always something intangible that we don't really witness, but it's still there. It's really allowed me to take those layers apart and see a world that's infinite and bigger than myself. I'm always trying to bridge how my work can play onto something that's bigger than myself — that has a meaning that's significant beyond just a beautiful picture that people can see and they can witness. They can see faith, they can see God, they can see nature, they can see elements that all combine together to build a picture. It's really allowed me to see things as multidimensional and not just surface.

A lot of my studies were in calculus and geometry and just learning about shapes. Say you look at a plant and you look at how the plant grows; it's very symmetric. It has a lot of fractals. When you think of fractal geometry, it's just a cool detail and it just reminds me of the sequence of the patterns of life. So I like to put those patterns into a portrait, because in this world we don't really see ourselves as math or science, we see ourselves as humans living in a society that's far from nature. I try to bridge it back through visual art.

I noticed another recurring theme in your work, which is the presence of big cats. Is that related to your attempt at reconnecting the viewer with nature? 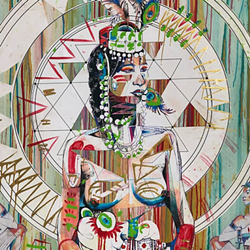 Yea, wildlife. A lot of our wildlife is extinct or it's going extinct and it's on the endangered list. There are a lot of gaming and poaching and environmental catastrophes. So I figure that painting big cats or even wolves, it's just my way of showing that there's more to life than humans. There's more to this Earth than what we can interfere with. We live in a world that has thrived on biodiversity and it's sort of something that we're taking away. So it's just something that I like to subliminally add, because people can see it and they can say, "Oh my god, that tiger, I love tigers." Well, this is what's going on with tigers currently.

So if I can remind people about what's going on while they can still delight in the artwork and they can still enjoy the visual, but they can also think, "Well this animal is important to me because when I see it I think of the totems of life, or I think of a painting, or I think of my favorite movie The Jungle Book." We don't see tigers casually in society so it's like an out of sight, out of mind thing, but if I can paint a picture and I can remind you that hey, there are these majestic creatures outside of human beings, then maybe I will inspire the next person to be an advocate for animal rights, and human rights, too. There's a huge intersectionality. We see a lot of humans being treated unfairly, so if we live in a world that doesn't even treat humans fairly, you think they're going to treat animals fairly? Nah.

You're known on Instagram and from your website as @GardenofJourney. How would you describe the Garden of Journey and what it means to you?

Garden of Journey is really just a path of aligning into your own abundance and to your own potential.

You were recently featured in a Ford commercial. How did you get involved with their Born to Roll campaign?

That was such an amazing opportunity. Ford has a department that does a lot of cultural work and they wanted to do a campaign that celebrated women of color. They got myself and two other black women who were not actors — we were actually a real artist, a real OBGYN, a real firefighter — and they asked us our stories. They asked us, "What does it mean for you to be a black woman? What are your hardships? What legacy do you want to bring?"

So it wasn't just like, "OK, come be in a commercial." They went and they searched but they also wanted to soul search and get people that matched what they wanted to represent for the campaign. So the whole purpose was just to celebrate women of color who are killing it, who are representing and persevering through it all, who are being successful and also being a light.

What was the experience like for you filming that ad?

I am used to putting my art first and I am very happy being in the background. But in this instance, my art was the background and I had to come forward. So it was a challenge in that way because I'm just not used to being in front of the camera like that. It was a big push, which was really good for me, because it was just a reminder to be the whole package and be prepared when my time comes.

People were asking, "Where are the black women muralists?" and there are not a lot of black women muralists. I've been sort of on my soapbox talking about that. There are not a lot of instances where we are being funded to do what we came here to do in terms of artists, whether we're being weeded out through applications or — I don't know. Maybe they don't know that we're here. People talk to me and they're like, "Are you the only black woman muralist?" I can't say that, I'm pretty sure there are more, but I don't know.

Two black women artists in this town you do know are Sloane Siobhan and Janelle Dunlap. You've recently started a collaborative project with them. Tell me a little about that.

That's called Manifest Future and I'm working on a piece in west Charlotte and the piece is in response to gentrification, which is heavy on the west side, especially on West Trade Street. I'm working together with Janelle and Sloane and I have the opportunity to practice what I preach and mentor another black woman artist and teach her about spraying, teach her about murals and teach her about the process. People don't always want to show you their tricks. It's a funny thing. It's a funny subculture of being an artist. Sometimes people don't really want to share their techniques because they feel like you could one up them or something. I'm teaching her what I know because it's just how we multiply, it's how we do more.

There are way more walls than I could ever paint, or even want to paint. If I can share the opportunities with another person who looks like me, that has the same passion and wants to see growth just like how I want to see growth, then I know that I'm doing at least something right.

So we're working on that together now. It's a response to gentrification, but we're not focusing on gentrification, because it's like a train that's coming at us full speed. There's really nothing much to do about it, but it's about how we react to it. We're reactivating a space that has been abandoned for 10 years. A lot of trauma has happened. A lot of broken promises have happened, but we want to fill it with new vibrations, give it color, give it purpose. So our mural is telling a sequential narrative when you look into it. You know how Hannukah has the days and each day means something? The mural has sections to it and each section has a theme. One of the themes is creativity. Good work. Reclamation. Ancestry. Sacred gardening. They're all culturally emphasized themes that people can come and connect with.

And you're offering a chance to truly connect with it through paint parties. What will those consist of? 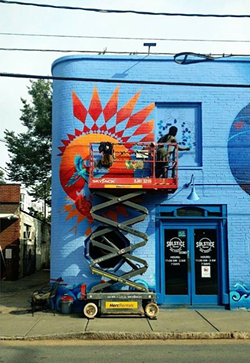 A huge interactive portion is that we have paint parties on every first and third Friday. The one on July 6 will be right out front of Mosaic Village. The purpose of those is that we can actually mimic the space to match the mural. So when we do sacred gardening, we're going to have agriculturalists and botanists come out and share what they do with the community.

The day that we have group work, I know a lot of people who work in finance and work in real estate who are advocates and have a lot of important information that doesn't trickle down. So the whole purpose of the event is to share that with the people around us and to generate people who have black business or support black business, no matter what heritage they are, and can just be down with the cause.

Through the paint parties we are allowing them to get intimate with the process so that after we leave it can still have a magnet to people. There's also the Rosa Parks Farmers Market that comes out on every Tuesday, so we're sort of reactivating the space along there with them. It's just a good way to cross pollinate and come around and invite people to pull up and show what community is.

Do you enjoy doing that type of collaborative work rather than working on your own?

I'm entering a space where I do like to collaborate with other artists. I think it's so important to collaborate rather than compete with people, but you also realize that not everyone is going to want to do that with you, and everybody is not in that mind state, and those opportunities don't always pop up. I'm confident in my talent so I don't really feel the need to compete with anyone, but I know that that mindset is few and far between, because there's such limited resources that sometimes people feel like they have to hold on to what's theirs because if they let it go there's not going to be any more.

Have you been seeing more collaboration in the Charlotte scene lately?

Yeah, a little bit, and it's been beautiful because there has been such limited opportunity before. Charlotte is just sort of becoming hip to the fact that, Oh yeah we actually do need art and we need more than breweries for culture. There are more things popping up and we are collaborating more with each other.