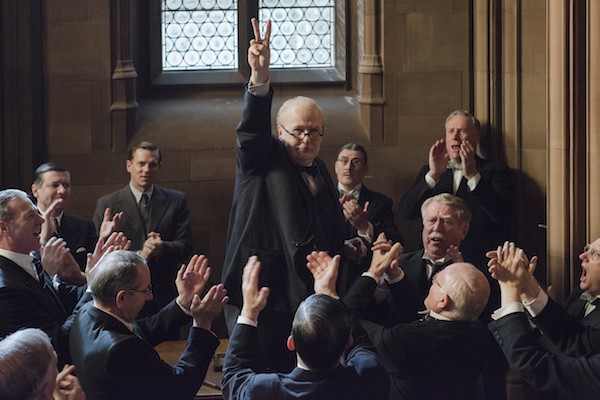 Casting famous actors as famous historical figures often puts the performer at an extreme disadvantage, since it means they have to work twice as hard to put over the same feat of duplicity as less recognizable thespians tackling similarly iconic figures. Then-unknown Ben Kingsley as Mahatma Gandhi? No problem. Anthony Hopkins as Alfred Hitchcock? Big problem.

In that respect, casting Gary Oldman as Winston Churchill seems like a risky gamble, given that both are known commodities. But Oldman, an actor who — let’s not forget — has already portrayed such disparate personalities as Sid Vicious, Lee Harvey Oswald and Ludwig van Beethoven (to say nothing of such fictional mainstays as George Smiley and Count Dracula), proves to be up to the task in Darkest Hour, a satisfying dramatization of Churchill’s fledgling days as the British Prime Minister.

Even operating under pounds of makeup required to convert the actor into the roly-poly elocutionist, it’s easy to initially spot Oldman peeking out. Yet as the movie progresses, Oldman effectively buries himself in the role, aided by the efforts of director Joe Wright and scripter Anthony McCarten to convey the urgency at hand — namely, that Adolf Hitler has already begun his march through Europe, and Churchill must decide whether to fight the bastard (his choice) or negotiate a treaty that will hopefully leave England untouched by Nazi destruction (the choice of many of his peers).

The historical highlights are on display: the dislike of Churchill by even those in his own party, the “miracle at Dunkirk” (also seen this year in not only Christopher Nolan’s Dunkirk but also the sleeper pick Their Finest), and, of course, the famous speeches. The latter monologues truly allow Oldman to shine, delivering the words with such fervor and feeling that it quickly becomes clear that they elected the right man for the job.