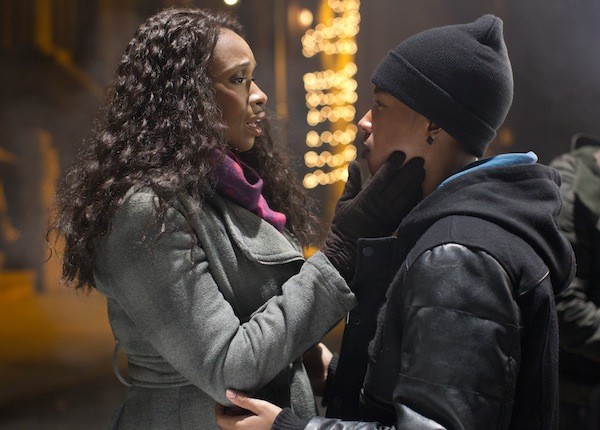 BLACK NATIVITY (2013). The art of the edit could be seen throughout the original theatrical trailer for Black Nativity, writer-director Kasi Lemmons' radical reworking of Langston Hughes' celebrated 1961 play. An expertly cut two minutes, this preview made the movie look like a major event, an inspirational and invigorating musical making its case for becoming a future Christmas classic. Unfortunately, the film itself is a disappointment, a flat endeavor so tonally off that it fails to stir much emotion. Upon revisiting the trailer, it's easy to see how I was duped: Much of the two minutes is powered by the singing of Jennifer Hudson, and her incredible voice would make even a laundry detergent commercial seem like an occasion to stand up and cheer. Hudson plays Naima, a single mom whose impending eviction from her Baltimore digs forces her to ship her teenage son Langston (Jacob Latimore) to Harlem to live with her parents until she can take care of him again. Reverend Cornell Cobbs (Forest Whitaker) and his wife Aretha (Angela Bassett) haven't spoken to their estranged daughter Naima in years, but as Christians, they're not about to turn away their own grandson. But Langston isn't happy with the arrangement, and his desire to nab enough money to reunite him with his mom places him in the company of a shady character named Loot (Tyrese Gibson), a street huckster with the potential to lead the boy down the wrong path. Lemmons has proven herself to be an accomplished filmmaker with such interesting works as Eve's Bayou and Talk to Me, so it's surprising to note just how lackluster this turns out to be, with its simplistic storyline and frequently drab camerawork almost as much of a drag as the amateurish central performance by Latimore. Hudson's singing and Whitaker's acting compensate somewhat, but for a truly inventive and uplifting African-American piece set in New York during the Yuletide season, skip spending the bucks on a Black Nativity rental and watch Run-DMC's "Christmas in Hollis" music video on YouTube instead.

Blu-ray extras include deleted scenes; 10 making-of featurettes examining the music, the casting and more; and trailers. 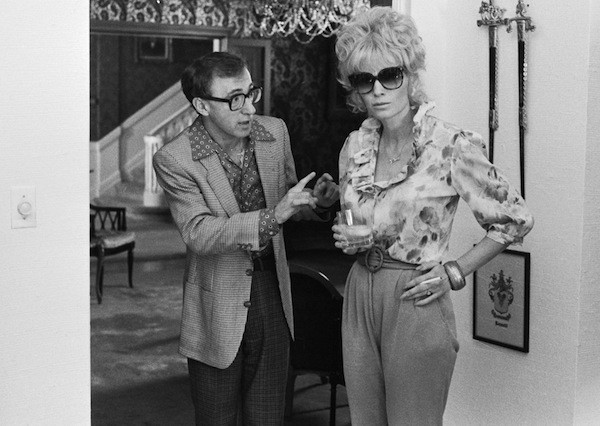 BROADWAY DANNY ROSE (1984). Woody Allen made two of his greatest pictures back to back during the 1980s — 1985's The Purple Rose of Cairo and, of course, 1986's Hannah and Her Sisters — but immediately before that one-two punch, the auteur fashioned this comparatively low-key but nevertheless irresistible bauble that showcases one of the best of the 13 performances Mia Farrow delivered in an Allen production. Allen himself plays the title character, a talent agent who's too sweet for his own good. He takes on the most dubious of acts (a blind xylophonist, a one-legged tap dancer, a penguin who's dressed like a rabbi, etc.), and when one of them miraculously makes it big, they invariably leave poor Danny for more successful agents. Danny's latest shot at a breakout client is Lou Canova (Nick Apollo Forte), a singer who was briefly popular decades earlier and is now desperately trying for a comeback. Danny lands him a spot on a Milton Berle television special (Uncle Miltie pops up in a cameo), but the married Lou feels that he can only perform if his mistress, a tough-talking cookie named Tina Vitale (Farrow), is there to cheer him on. Danny dutifully agrees to bring her to the show, but a case of mistaken identity (with the Mob, no less) finds Danny and Tina on the run, getting on each other's nerves even as they're dodging vicious hoodlums. Allen's Danny Rose is as lovable as he is hilarious ("Take my Aunt Rose. Not a beautiful woman at all; she looked like something you would buy at a live bait store."), while Forte is aptly cast as a lunk-headed loser in his one and only movie appearance. As for Farrow, she's a treat in a role that's a far cry from the fragile women she usually portrayed in Allen's films. Even in this great year for movies, Academy favorite Allen managed to snag Oscar nominations for both Best Director and Best Original Screenplay; Farrow, never an Academy fave (she wasn't even nominated for Rosemary's Baby), had to settle for a Best Actress Golden Globe nomination.

Blu-ray extras consist of an isolated music and effects track and the theatrical trailer. 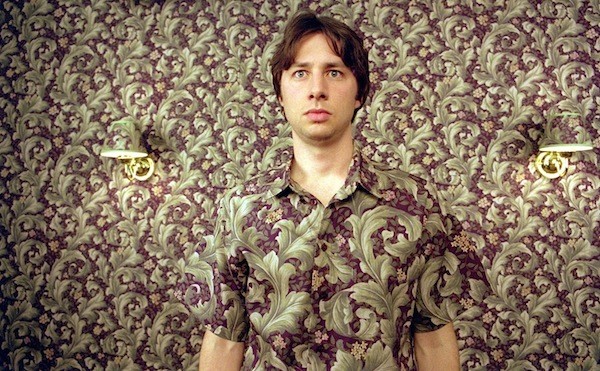 GARDEN STATE (2004). Zach Braff, the star of the TV sitcom Scrubs, used his minimal clout to secure financing for his first endeavor as a writer-director-star, and he did more than just knock it out of the park. This one reached all the way to the county line — and also bounced onto many "10 Best of 2004" lists, including mine. Braff cast himself in the starring role of Andrew "Large" Largeman, a struggling LA actor who spends more time waiting on tables than emoting in front of the cameras. Heavily medicated ever since a troubled childhood, Large is too numb to feel much of anything; nevertheless, he knows that it's only proper to return to his New Jersey hometown to attend the funeral of his mother, a paraplegic who drowned in the bathtub. Large hasn't been home in nine years, which leads to some tense moments with his authoritarian dad (Ian Holm); in an effort to keep some distance between them, he decides to spend most of his few days in town hanging out with his old high school acquaintances, an uninspiring assortment that includes an aimless gravedigger (Peter Sarsgaard) and a clod (Michael Weston) who became rich after inventing "silent Velcro." Yet Large's most significant relationship turns out to be with someone new to his circle: Sam (Natalie Portman), a vibrant life force who's the perfect remedy for an emotionally bottled-up guy trying to make some sense out of his muddied existence. Braff packs the majority of the humor into the first half, accentuating the eccentricities of his characters and providing them with some killer wisecracks. Yet as the story progresses, the humor takes a back seat to the more weighty issues on Braff's mind, specifically the exploration of the ways in which Large can put to rest the ghosts of the past while also coming to new understandings with Sam, his father and, most importantly, himself. Braff has a nebbishy Everyman quality that suits the part of Large, while Sarsgaard contributes an edge of brittle hostility to his character. Yet it's Portman who shines brightest — she's nothing short of sensational, punching across the whiplash moods that Braff's script requires of her. She earned a Best Supporting Actress Oscar nomination for the same year's Closer, but she's even better here. 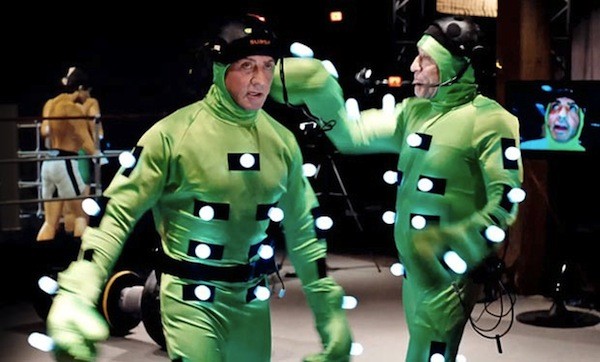 GRUDGE MATCH (2013). Muhammad Ali may have had the ability to float like a butterfly and sting like a bee, but Grudge Match can do no more than stumble around like a cockroach that's taken a direct hit from a can of Raid. The pitch probably had Hollywood suits salivating, and, to be sure, it's a clever hook: Fashion a boxing picture in which Sylvester Stallone, whose Academy Award-winning Rocky made him an overnight star, and Robert De Niro, who won an Oscar for Raging Bull, play former pugilists who plan to get back into the ring 30 years after their previous two bouts left each boxer with one victory apiece. It's a sound premise for a breezy comedy, and Grudge Match gets off to a promising start as it draws on our memories of these actors in their prime and offers a bonus in Kevin Hart as the event's motor-mouthed promoter. Unfortunately, scripters Tim Kelleher and Rodney Rothman were obviously laboring under the impression that this cotton candy confection needed some dramatic heft to it, so they added some buzz-killing subplots that drain away all the fun. Kim Basinger plays Sally, the woman who loved Henry "Razor" Sharp (Stallone) back in the day but made the mistake of sleeping with Billy "The Kid" McDonnen (De Niro). Jon Bernthal co-stars as B.J. (and you can bet there are a lot of feeble jokes centered around that moniker), the product of the fling between Sally and Kid. There's even a moppet (Camden Gray) — B.J.'s son — who (shades of Crazy Heart) is left to fend for himself while Grandpa Kid indulges in booze and babes at a bar. These formulaic thrusts offer nothing new, and coupled with the fact that the winner of the bout is never in question, it looks like it will be up to wily vet Alan Arkin, as Razor's friend Lightning, to save this thing. But no, his character is just another in a long line of cinematic seniors with foul mouths, and with Nebraska's June Squibb recently raising the bar, Lightning's cracks about his favorite hooker (the things she could do with a ping pong ball!), his white pubic hairs and the health benefits of horse urine only further serve to make Grudge Match about as appealing as jock itch. 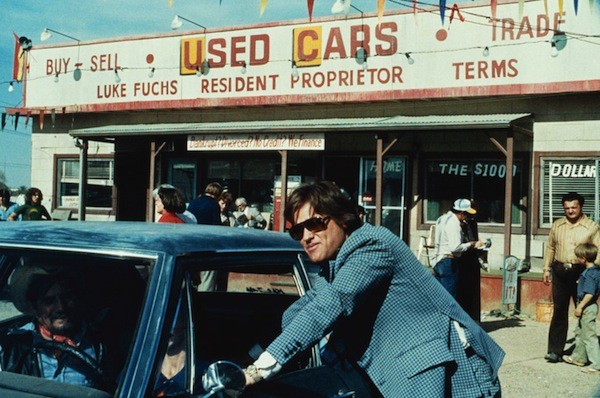 USED CARS (1980). Robert Zemeckis met with such tremendous success in helming the likes of Back to the Future, Who Framed Roger Rabbit and Forrest Gump that it's often easy to overlook the two gems he directed and co-wrote (with Bob Gale) at the beginning of his career. The delightful 1978 comedy I Wanna Hold Your Hand, about the efforts of a bunch of teens trying to see The Beatles live on The Ed Sullivan Show, was followed by this irreverent and often uproarious comedy that deserved better than the fate it suffered at the U.S. box office. Kurt Russell stars as Rudy Russo, a car salesman who feels he has what it takes to become a corrupt politician specializing in graft. For now, he's stuck working at the struggling dealership of the kindly Luke Fuchs (Jack Warden), whose venal brother Roy (also Warden) owns the rival lot across the street. Roy puts in motion a dastardly plan to take control of Luke's business; for their part, Luke's employees — Rudy, the superstitious Jeff (Gerritt Graham) and the excitable Jim (Frank McRae) — are nothing if not loyal, and they set about thwarting Roy's heinous scheme. Everything one would expect from an R-rated comedy from the early '80s is present and accounted for: gratuitous T&A, profanity that flies like poetry (especially when delivered by Warden and McRae), then-timely potshots at famous figures both bad (Ayatollah Khomeini) and good (Jimmy Carter, and how longtime Libertarian goober — and Ted Nugent BFF — Kurt Russell must have enjoyed doing that scene!) and plenty of impressive vehicular stuntwork. Fans of Laverne & Shirley will further get a kick out of the casting of that show's Lenny and Squiggy, actors Michael McKean and David L. Lander, as a pair of electronic wizards, while devotees of The Munsters will delight in the appearance of that series' Grandpa, the singular Al Lewis, as a particularly stern judge who once sentenced a kid to 35 years behind bars for stealing beer.

Blu-ray extras include audio commentary by Zemeckis, Gale and Russell; an isolated track of Patrick Williams' score; outtakes; and the theatrical trailer.