With the recent news of the NFL drafting its first openly gay player, we look at Charlotte's LGBT-friendly sports leagues.

On May 17, a couple shared a kiss, and boy, was it an emotional one. There was crying and hugging — even some cake. Yes, the couple had cake to celebrate their momentous occasion!

There wasn't a wedding, though you'd be forgiven for thinking it was. But it was a celebration of a union.

When Michael Sam learned over the phone that he had been drafted by the St. Louis Rams, ESPN cameras rolled as he leaned into his college boyfriend and kissed him. As the first openly gay man to be drafted by a professional American football league, Sam's pick is historic.

Some praised Sam for his achievement. Some didn't.

"'My brothers are 7 and 11 and saw that!!!" tweeted former Ole Miss basketball player Marshall Henderson of the kiss. After receiving some backlash, Henderson responded. "I'm sorry, but I DO NOT AGREE WHATSOEVER that should be shown to where innocent eyes can see!!!"

While folks like Jones and Henderson shuddered in disgust, other professional athletes played it cool long before Sam was even drafted.

Weeks before the draft started, Carolina Panthers quarterback Cam Newton and San Francisco 49ers quarterback Colin Kaepernick said their teams would accept Sam should he end up in Charlotte or California.

"His job is a linebacker," Newton said of Sam in the February interview. "The main focus is, we're football players. We're here in this organization for one reason and one reason only. And if you're able to help us attain that winning success, your personal life is your personal life."

"I think when he steps into that locker room everyone's going to know that he's there to help us win games," Kaepernick said. "And that's why you're in the NFL — to help us win games. No one cares if you're black, white, straight, gay, Christian, Jewish, whatever it may be. When you step on that field you're a member of, in my case the 49ers, or the Carolina Panthers, that's your job. That's your occupation."

That sense of acceptance, exhibited by professional players like Newton and Kaepernick, is new — and growing. But local gay sports teams have been changing attitudes since the day they formed.

BJ Smith, 34, is president of the Charlotte Royals Rugby Football team, one of several gay sports teams that are on the rise locally.

"You have this team that is mostly gay men," he says. "You have them coming out and being competitive and being a strong force. Especially with rugby. Even people who play sports say you have to be crazy to play rugby. It's awesome that we are doing as well as we are these last couple seasons."

Being a gay athlete in such a rough-and-tumble sport as rugby has its advantages.

"They think they can just run all over us," Smith says of straight competitors. "It's a much better feeling when we can walk away either triumphantly beating them or making them have a hard game, and they walk away realizing they just played rugby with a gay team."

Smith says Sam's now-legendary kiss — and, more importantly, his impending professional play — will break down even more stereotypes and usher in more acceptance for LGBT athletes.

"People have this idea that we're not masculine or we don't fit into the typical stereotypes or conventions of being athletic," he says.

OVER THE PAST several years, campaigns for LGBT inclusion have made their way to a variety of sports arenas. College athletes, including football and basketball players at Chapel Hill, Duke University and other schools, have filmed videos for the national "You Can Play" project. So, too, have Charlotte's and Raleigh's National Hockey League teams.

It's all in an effort to create more affirming spaces for athletes of all varieties — something local LGBT sports teams have been doing in Charlotte for years.

Along with the Royals, the Charlotte region is home to gay softball teams, bowling league, tennis matches, dragon boat racing and volleyball teams.

For those who play, the affirming teams offer opportunities to connect with like-minded LGBT people and straight allies and provide space for life-long athletes to simply do what they love.

Jon Hoppel, who writes a local sports column for QNotes, has been interested in sports since he was 3, when he started playing soccer. He was a letterman all four years of high school and played in college for a year.

Since 2006, Hoppel, 35, has played with the Carolina Softball Alliance, a local LGBT-affirming softball league with several teams, and he is a veteran player with the Royals.

"I'm a very competitive person," Hoppel says. "This gives me an outlet to do that and sports are a great way to meet people and the bond that you have doing something physical with one goal — winning a game or tournament or championship — that's a very strong bond you make with people."

Rosemary Gardner, 32, has played with the Charlotte Roller Girls, a local women's flat-track roller derby league, since 2007. Like Hoppel, she's enjoyed a life-long involvement in sports, playing soccer as a kid and running through college. She says athletics offers an outlet to relieve stress and be involved. 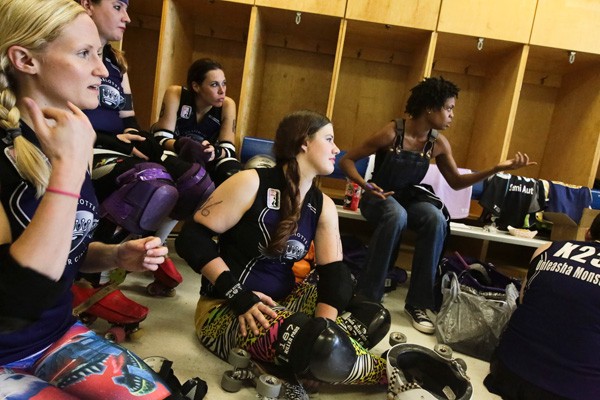 "It wasn't until I found roller derby that I had that same fulfilling team sport and activity," says Gardner, whose Roller Girls nickname is "Rosie Cheeks." "I really missed being part of a team and I missed the physical fitness."

The Charlotte Roller Girls also offers Gardner an affirming environment. Gardner, who identifies as a lesbian, was out to some friends before joining the Girls in 2007. She says the team has allowed her to compete without worry of rejection.

"A lot of times, people wonder why Roller Girls are so accepting, why does it seem so many people from the LGBT community are involved in it," she says. "I don't even know that there are a larger percentage from the LGBT community in roller derby. I just think that no one cares what your orientation is, so it's open and it's easy to just be who you are without any pretense."

Gardner also thinks the sports world has made strides in inclusion. She points to increasing visibility from pro athletes like Michael Sam.

"It's exciting to see so much awareness in pro-level sports," she says. "I think for the wider society to start being more accepting, we have to have those people in pro sports, high-profile people coming out."

As the NFL takes a big stride, other pro sports leagues are also taking notice. The NBA welcomed its first openly gay player, Jason Collins, last year. The WNBA recently announced a new marketing campaign to reach out to LGBT fans. It's the first pro league to actively recruit gay and lesbian fans, with each team in the league committing to some sort of outreach initiative, including attendance at LGBT Pride festivals and parades.

The pro teams might be playing catch up, though. Gardner says non-traditional sports like roller derby have always been open.

"From its very beginning, because so many people already broke the mold of what a traditional female athlete might look like, act like, be like, it laid a really solid groundwork for the organization — not just in Charlotte, but worldwide," she says. "It's so much more open and accepting of the LGBTQ spectrum."

ZACH ANDERSON became involved with local LGBT sports teams after accepting a challenge. The 24-year-old had competed as a high school athlete on soccer and football teams. When he moved to Charlotte, his roommate ribbed him about his strength.

"One of my roommates was on the rugby team for a long time," Anderson says. "I had never heard of it. He told me, 'You probably wouldn't be cut out for it. It's a rough sport. I don't think you'd last.'"

Anderson asked him when practice was and showed up.

"I love being on the field," he says. "You can't buy that experience. You just have to be a part of it and know what it feels like to have all 15 people on your team. They are there for the same reasons you are. [Those are] your brothers on the field. They are there to shed blood, sweat, tears, everything — all in the name of getting a victory."

Being "part of the team" is important for LGBT folks, who regularly experience being left out. It's one of many reasons Anderson, Smith and Hoppel say they enjoy their primarily LGBT teams.

"There have always been gay athletes; they've just not been able to be open about it," Anderson says, noting that the need for athletes to come out still exists.

Ron Tessner, commissioner for the Carolina Softball Alliance, says plenty of gay players are still closeted, but some decide to begin their coming-out journey in sports, a familiar world.

"It gives everyone the opportunity to be themselves and have fun and make friends while doing so," Tessner says. "It's an open-door policy."

Smith has witnessed firsthand the power of affirming athleticism. He's seen people use the teams to network, come out and grow.

"One of the guys, he identified as straight when I first met him and he was very introverted," Smith says, noting how the team experience produced camaraderie and led to the player coming out. "Now he has grown in being confident. It's quite awesome to see people go through those stages and being part of that. Who wouldn't want to be a part of somebody's growth and development in a positive way?"

Tessner recently started a small volleyball team with a group of friends in Gastonia. There, he and his team members are the only openly gay team in the league. When they go up against a team, their stereotype-breaking game play will be front and center for straight competitors and audience members.

Playing against and beating a straight team is an empowering feeling for many Royals players.

"Whenever we are going in to play predominately straight teams, our guys kind of get it in their head that they are stronger than us," Smith says. "It's really hard to shake off what most gay people have been told or fed into, so it's really nice when we do well against a straight team."

As LGBT acceptance grows in mainstream sports, one might think the need for LGBT-inclusive community teams could dissipate. Local athletes don't think that will happen. Anderson says the teams create community, at home and across the region, as teams travel to play with other athletes in LGBT communities in Nashville, Atlanta and other cities.

"Michael Sam was just drafted," says Anderson. "Eventually the stereotypes will be broken down and eventually it won't matter as much. Terms like gay or straight while playing on the field will dissolve, but for now they are still here. We're still fighting for inclusive change."

This article is provided in partnership with QNotes, Charlotte's LGBT community newspaper. Learn and read more at goqnotes.com.