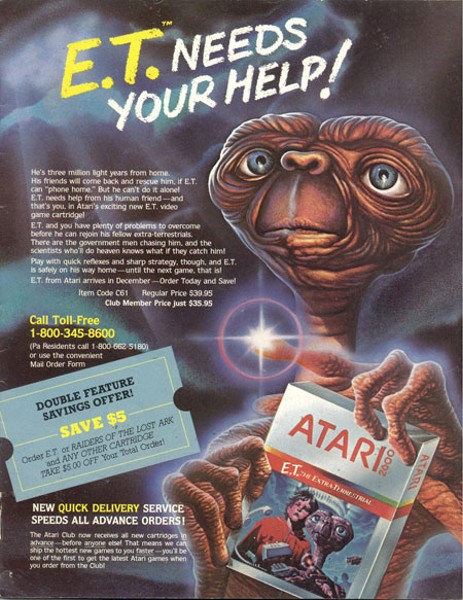 In the last two columns of "Console Me," I discussed the Top 10 games ever made for the Atari 2600. The harmony of the universe depends upon an eternal balance, and so it is my duty to bring you the 10 worst games ever programmed for Atari 2600.

10. E.T: The Extra-Terrestrial. This is often considered the worst video game ever made, but that's simply not true. Don't get me wrong, it's bad — really bad — but there are plenty of games that are worse. The objective of the game is to guide E.T. through various levels to collect three pieces of an interplanetary telephone that will allow him to phone home. Every now and then you'll fall into a pit, at which point E.T will elongate his neck and magically fly out of said pit. Weird.

9. Racquetball. This was released in 1981 and attempts to render a multi-dimensional play court and create a pseudo-3-D environment. The problem is the ball doesn't scale down as it moves further in space, so it becomes impossible to differentiate between the ball and the shadows it's producing all over the court.

8. Fire Fighter. After programming hits like Breakout and Asteroids for Atari, Brad Stewart created Fire Fighter for Imagic. You play a fireman attempting to save a man from a burning building. This has amazing graphics but tedious, repetitive gameplay. It's confusing, and yet also too easy — you pretty much always have enough water to rescue the man immediately.

7. King Kong. Stop me if this sounds familiar: Dodge obstacles as you climb to the top of the screen, where a giant ape is holding your girlfriend hostage. 'Twas beauty that killed the beast, but it was apathy that killed this game. Developed by Tigervision, King Kong is a Donkey Kong rip-off with mediocre graphics and some of the worst sound effects ever.

6. Dishaster / Dancing Plates. In this 1983 game, you control a young girl trying to keep a bunch of spinning plates balanced on poles. With monotonous gameplay, this is more like work than play — and sure to give you a headache. With no sound effects or background details, it lives up to its name by being a "dishaster" on every level.

5. Skeet Shoot. Like Dancing Plates, Skeet Shoot is proof that a publisher would release anything to make a buck. The player assumes the role of a skeet shooter who is shooting clay pigeons. This feels like half of a game — poorly programmed with a variety of useless game variations, bad graphics and frustrating gameplay.

4. Firefly. In Mythicon's Firefly, you're a pilot who crash-lands on a planet inside a black hole populated by machine bugs. You pilot one of these machine bugs (a pixelated butterfly), kill bad bugs and collect treasure, all while trying to rescue a pixie.

3. Bugs. I'm confused. Based on the title, logic dictates I should be killing bugs — so why am I shooting blocks at lizards!? Before each stage, you travel through some kind of inter-dimensional stargate before aiming your cross-hairs at centipedes, caterpillars and, apparently, the GEICO Gecko.

2. Sssnake. Developed by Data Age, Sssnake is similar to Centipede, except the player moves in the center of the screen and fires toward the top, bottom and sides. Your character (a block) shoots snakes (several blocks connected together) and monsters (fast-moving blocks). It's so bad, it makes most of the other games on this list look like the best of Atari.

1. Karate. Developed by Ultravision, 1982's Karate is an insult to anyone who has ever spent money on a video game. In this "fighting" game, green and purple karate masters do battle... without actually touching each other! There's no collision detection — punches and kicks look ridiculous — and if it weren't for a score card at the top of the screen, you'd never know contact was even made. This game takes bottom honors for being the absolute worst.