Gall in The Family

Michelle Pfeiffer finds herself once again married to the mob in The Family, and that's decidedly a good thing. This accomplished actress made significant contributions to two gangster flicks back in the 1980s — Brian De Palma's hard-hitting drama Scarface (1983) and Jonathan Demme's lighthearted comedy Married to the Mob (1988) — and this latest effort feels like a mash-up of the pair, combining the unrelenting brutality of the former with the quirky nature of the latter. Unfortunately, it's not always a comfortable union, and it's a blessing that the film has somewhat compensated by assembling a strong quartet of performers to play the title clan.

The Manzonis are an Italian-American family whose patriarch, Giovanni (Robert De Niro), was once a powerful Mafia figure until he elected to turn snitch. Now it's up to FBI agent Robert Stansfield (Tommy Lee Jones, looking pretty bored in his few scenes) to keep the Manzonis secure in the witness protection program, a real problem since all of the family members — wife Maggie (Pfeiffer), daughter Belle (Dianna Agron) and son Warren (John D'Leo) — are always blowing their covers by hurting people who annoy them. The outfit's latest location is Normandy, France, where the Manzonis try to start fresh as the Blakes. Fat chance: Within a day or two of arrival, Dad is pummeling a dishonest plumber with a baseball bat, Mom is blowing up a supermarket run by locals who sneer at Americans' fondness for peanut butter, Sis is using a tennis racket to thrash a high school boy making unwanted advances and Little Brother is assembling his own version of a mini-Mafia to help deal with a bullying classmate and his sycophants. Meanwhile, the mob kingpins that Giovanni betrayed continue to look high and low for him, having no success until the most improbable of clues makes its arrival stateside, literally wrapped like a present. 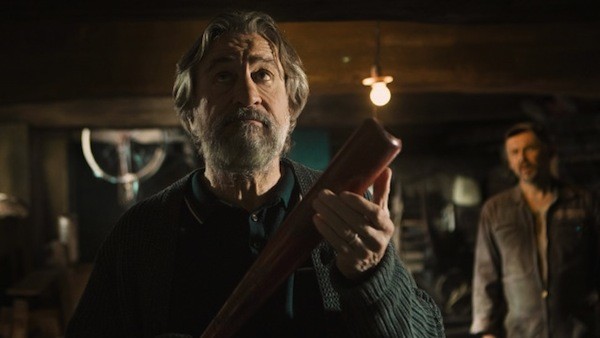 Sure, seeing De Niro wield a bat is nothing new — he did it benignly as a baseball player in Bang the Drum Slowly and fatally as Al Capone in The Untouchables — but the important takeaway here is that this is one of those rare recent occasions where the actor does more than merely mug for the camera (maybe not much more, but every additional tic or tonal variation is greatly appreciated). Pfeiffer's even better, as Maggie works her way through her perpetual anger and frustration in an effort to hold the family together. Most amusing, though, are Agron and especially D'Leo, blessed with the project's most original characters. Additionally, whereas most movies present teen siblings who squabble over the most inane reasons, this one details a relationship that is mutually respectful and loving — a nice change of pace. And let's not forget the contributions of a talented actor named Emeron, who plays the fifth member of this family: the trusty German shepherd named Malavita (Italian for "organized crime"). Forget all the hoopla surrounding Uggie from The Artist — Emeron delivers a masterful method performance that stirs memories of Brando and Newman. (Well, Benji and Rin Tin Tin, at any rate.)

Writer-director-producer Luc Besson has shown a penchant for extreme violence in several of his films (The Professional, La Femme Nikita), and this one's no exception. But with more humor involved than usual, he has a hard time maintaining a consistent flow, and much of the brutality comes across as cruel rather than crucial. His screenplay (based on Tonino Benacquista's novel Malavita) is frequently as messy as these mob rub-outs, with some good ideas abandoned too soon (Warren's social network at school; Maggie's altercations with the locals) and at least two subplots (Belle's love for a substitute math teacher; Giovanni's crusade to have clean water in his home) that are clumsily executed and wrapped up.

With Martin Scorsese serving as an executive producer — one scene even lavishes love on the filmmaker's GoodFellas — viewers might have hoped for a more polished mob hit. But while it qualifies as OK entertainment — especially for early September (that dead zone between summer blockbusters and fall award contenders) — The Family is ultimately nothing to write home about.