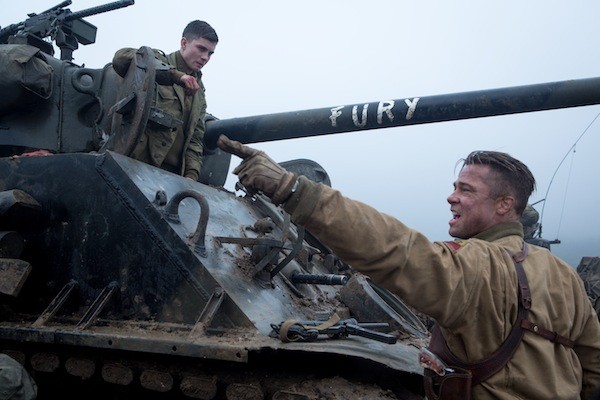 There are several moments in writer-director David Ayer's World War II drama Fury that prove to be so brutal, direct and uncompromising, they make Steven Spielberg's Saving Private Ryan seem as mirthful as the Abbott and Costello romp Buck Privates by comparison. And if that sounds like so much hyperbole... OK, guilty, but the fact remains that what we have here is about as unsentimental a war movie as has ever barreled across the movie screen.

Set in 1945, toward the close of the global conflict, the film makes its one major concession to convention by shaping its story as the experience of a greenhorn soldier who finds himself coming of age in the presence of his more seasoned comrades. That would be Norman Ellison (The Perks of Being a Wallflower's Logan Lerman), who's only been in the army for a few months when he's assigned to a tank unit led by a gruff sergeant known as Wardaddy (Brad Pitt). "Every German we meet wearing a Nazi uniform, they're gonna die." That's actually one of Pitt's lines in Inglourious Basterds, but if there's one thing that his Aldo Raine from that film shares in common with Wardaddy, it's an utter hatred for the enemy. What's more, he expects equal animosity from his tank team, and while he receives it from the hardened members of his crew (Shia LaBeouf, Michael Peña and Jon Bernthal), it's the soft rookie who worries him, since any hesitation in battle on the kid's part could result in G.I. deaths.

The claustrophobic tank setting brings to mind such notable submarine dramas as Das Boot and Run Silent, Run Deep, right down to the inhabitants' frayed nerves and constant bickering. Ayer does a superlative job mining the tension between these grunts, and that's especially brought to light in an excellent stretch set in a liberated German village, wherein Wardaddy and Ellison play house (so to speak) with a pair of villagers (Alicia von Rittberg and Anamaria Marinca) until the other, more boorish members of their outfit puncture the fantasy.

Subscribing to the "War Is Hell" theory, Fury (incidentally, the name given to the tank) depicts the brutality and the insanity of armed combat in punishing, visceral fashion. Ayer doubtless intended for the sweet, sensitive Ellison to serve as the audience surrogate and de facto tour guide through this landscape — a logical approach, even if the character's presence sometimes feels too facile. In every other regard, though, Fury stares deep into the mouth of madness and steadfastly refuses to flinch.