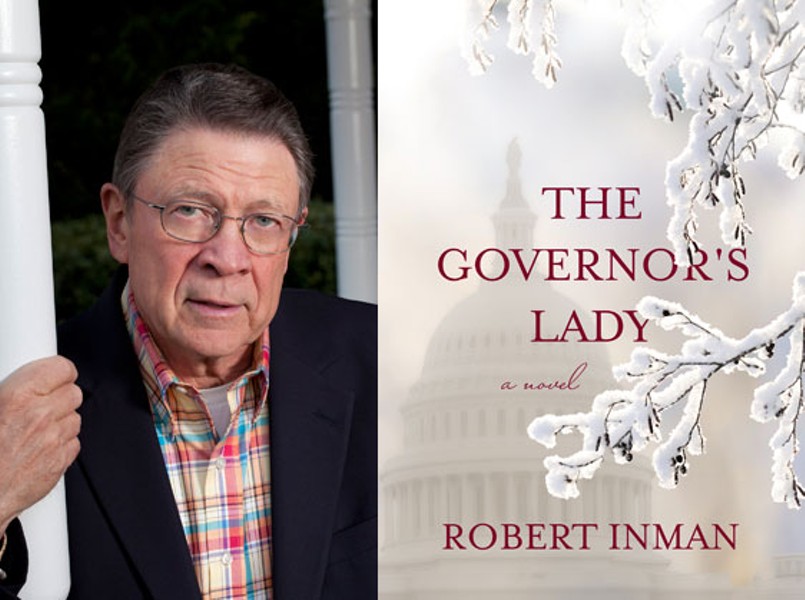 Forget the Robert "Bob" Inman that you knew as an anchorman for WBTV — that's if you still remember, seeing as he left back in 1996. Once known for his reporting, he's long moved on to penning novels, screenplays and stage plays. Inman, who now resides in Conover and Boone, will visit Charlotte to sign and discuss his latest release, The Governor's Lady on Aug. 29 at Park Road Books.

While working at the news station, Inman devoted his off-time to honing the craft of fiction. "I worked 3 p.m. to midnight at the TV station, so my routine was to get up in the morning, drink a cup of coffee, read the paper and go work for a couple of hours. I would keep the momentum going for a story and I got a lot of work done."

His first novel, Home Fires Burning, was released in 1987. Hallmark later bought the rights and requested that Inman adapt the novel into a screenplay for one of its "Hall of Fame" TV presentations.

While still working full-time at Channel 3, Inman managed to publish two novels and several screenplays, and was under contract for a third novel. (How's that for work ethic?) But he chose to leave broadcast news to allow for more flexibility and time to expand his territory in the world of fiction.

"I've just always been fascinated by using the power of words to entertain and inform and even disturb, so I've always wanted to be in the word business," says Inman. "Journalism was my first love, but I grew up around a family of rowdy storytellers and I always had that storytelling urge and knack, so it just naturally led me over into fiction writing."

The Governor's Lady is set around Southern politics. In it, we meet a woman by the name of Cooper Lanier, who is elected governor after her husband passes her the torch while he runs for president. What Cooper doesn't know is that the hubby doesn't actually intend to give up control of his former role. Instead, his move is strategic. By virtue of her position, he plans to retain his influence in state government. Luckily, Cooper is no puppet, nor is she shy about saying what she thinks in a mostly male-dominated spectrum.

Bold, brassy and assertive, the character was influenced by some of the women in Inman's life. "I guess, in a way, she's inspired by all the strong women I've known, including my mother and grandmother, who were powerful influences on me growing up," says Inman. "There was a woman politician in Alabama that I covered as a journalist, named Lurleen Wallace. The situation with Cooper and her husband is similar to the situation with Lurleen and her husband, George Wallace. George was running for president and he managed to get Lurleen elected governor. The similarities are there, but they are two very, very different people."

In a recent blog post by Inman, he reflects on Facebook chief Sheryl Sandberg's Lean In: Women, Work, and the Will to Lead. The book argues that women should have a stronger presence as leaders in today's society, specifically in government and business. Inman relates his imaginative yet realistic character, Cooper Lanier, to her stance.

Inman believes the world will be a lot better off when there are more women appointed and elected at every level of government and politics. "Women bring a perspective to it that men generally don't bring and as I discovered Cooper Lanier, that really came home to me. She could do things that maybe a man could not, because of her perspective," Inman says.