Food In The Nude

Picnicking with the NC Naturists 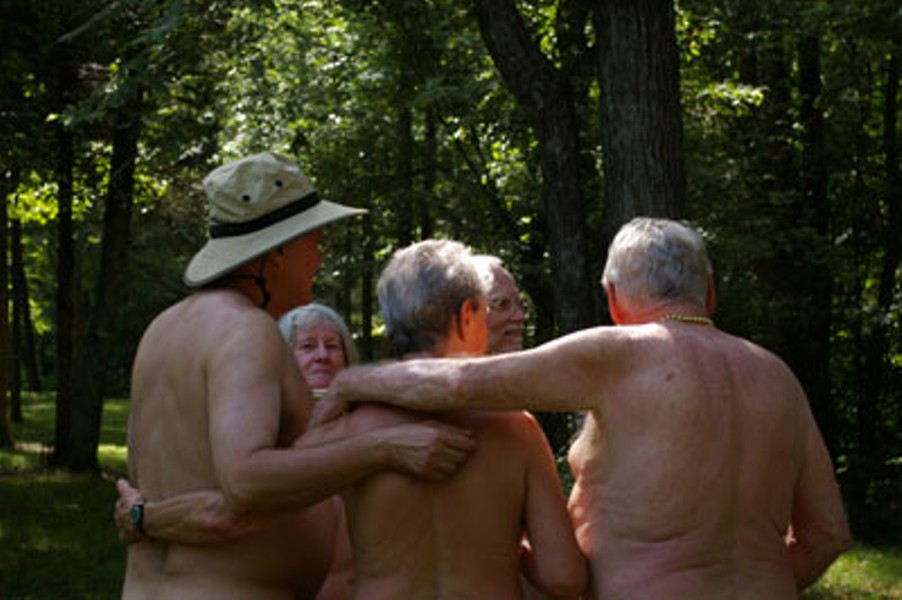 Would I chicken out?

That was the question plaguing me all month, as Aug. 27 approached. On that day, marked on the calendar with a nude stick figure (I guess all stick figures are nude), I was to join the NC Naturists and "participate fully" in their potluck picnic event. When NC Naturist President Pam told me at 1:30pm everyone would promptly be disrobing, I expected a scene like Eyes Wide Shut with real robes. I actually considered buying one so I wouldn't feel out of place.

There were 20 or so nudies sitting in lawn chairs, eating on paper plates, when I pulled up. Pam greeted me and asked if I brought a towel. The first rule of a naturist society is make sure you lay down a towel before you sit anywhere. Luckily, she had an extra.

I went into a bedroom where other people's clothes were stacked in neat piles on the bed and reconsidered what I was about to do. No one expects me to have a perfect body, I told myself. An essay on the NC Naturist Web site offered comfort: "It doesn't matter if you have a surgical scar, had a mastectomy, have large breasts or small breasts, wide hips and a flat belly or a little belly and narrow hips." OK, that may have been the pep talk for the self-conscious lady. But me?

I disrobed, then emerged from the bedroom with only my notepad. It crossed my mind to use my trusty journalism tool as a shield. Instead, I concentrated on food. In line, I almost ran into a naturist, which as you may imagine, is a more serious blunder in the clothes-free world. With a plate of BBQ pork, baked beans and mac and cheese, I joined the group. It felt like a strange dream when we talked about the most mundane of topics: directions and how I got lost ­-- just no one was wearing any clothes. For the first 10 minutes or so, my leg wouldn't stop shaking. Sitting postures in the group were interesting. Some nudists sat Indian style or with partially crossed legs; others were less bashful and looked to be a few notches below doing the splits.

NC Naturists formed in 1981, mainly to provide local nudists with a network to go on Blue Ridge Mountain hikes together. Other clubs existed in the area, but they were landed clubs that nudists had to pay to get a room or camp in. Landed clubs have more activities -- jiggling ones like volleyball, or more cerebral events like a seminar on preparing a newbie for his or her first nudist experience. I asked naturist Bob if it's safe to hike in your birthday suit with branches and other hazards ready to poke and scratch around each bend. Bob laughed as if I've never really lived and said it's the most natural experience in the world.

The ratio of men to women is about four or five to one. Not having grey hair is a rarity as well for club members. About 92 percent of nudists are over the age of 35. The club gets in a heated debate on the subject of modesty in today's youth.

"Part of it, I wonder, is if it's because there's more freedom in the younger generation to be naked other places," offered Pam. "I disagree with that," said Bob. "In high school, boys don't take showers anymore. And the showers that they build in high schools have stalls and curtains on them." There was disgust in Bob's voice. "A lot of young people think, 'I'm too fat.' They have to have the perfect body and everything. I wonder if that has something to do with it," said a tanned nudist who runs nude 5K races.

Naturists aren't aligned in social or political matters, and I was surprised when one NC Naturist told me most members are conservative. "Instead of skiing or fishing being our common interest, it's socializing comfortably," said Pam.

One topic that every naturist shares is their utter contempt for swimming trunks.

Pam regaled a story of having to buy a swimsuit to go swimming with her grandchildren at a public pool. "I got in the swimming pool with that suit on, and it felt so weird. Fabric is just clinging and slapping around." "Awful, just awful," said a naturist named Jim.

Naturists point to a statistic that over 40 million Americans have skinny dipped in mutual company. So if you have, you are suppressing your naturist calling.

Landed clubs are also more family-oriented. Pam and husband Bob took their daughter to them growing up -- until one day she stopped wanting to go, which still befuddles them. Another couple, Jim and Angel, decided to take their daughter when she was 16. She had so much fun she wanted to take a friend back. Jim and Angel had to ask the girl's parent if they could take her. "That was a fun conversation," Jim recalled. I asked if it's weird for kids to see their parents in their birthday suits. That's the mind-set of the textiles (naturist's pet-name for the clothing-mandatory world), I'm told. Textiles also assume naturists are perverted and are into spouse-swapping. Some send e-mails that are easily detectable, asking about shaving habits or other fetishes.

Throughout the day, more than the normal share of eye contact is directed towards me. But in fairness, I was the one asking most of the questions and essentially interviewing 20 people at once. And, none of the eye contact was below the clavicle. I did feel vulnerable, however, when I had to bend over to pick up my plate of food or any time I was walking somewhere and people could be staring.

The only R-rated story of the day came as I was leaving. An older man (even for that crowd) who had a walker told me a story of someone else's first time at a naturist outing: "I know we're not supposed to look, but what's wrong with that guy's penis over there?" A woman said to her husband. "Looks normal to me, what do you mean what's wrong with it?" The husband replied. "Well, it don't look like yours." "It was the first uncircumcised penis the woman had ever seen, and she thought it was deformed," said the old man. Then, he added: "Write in there that I'm looking for a widow to take care of me. No one younger than 50."