Fly on over to Wing King Café

King of Wings in the Queen City

Football and wings is a classic combination; just like peanut butter and jelly, milk and cookies, spaghetti and meatballs, Muggsy Bogues and Space Jam.

You always need to have some extra paper towels on hand during football season as you chow down on some spicy, saucy goodness while cheering on your team

So with the kickoff of football season last weekend, it was only appropriate that I write my September story about some of the best chicken wings in the Queen City. I know that this is a contentious topic (especially with all of the Charlotte residents that originally hail from upstate New York), but I feel confident that Wing King Café is in the running for some of the best wings in Charlotte.

First, you have to overlook the location, the gas station plaza perched on the corner of South Tryon Street and Carowinds Boulevard is questionable at best (but what can I say, some of the best food can come from hole in the wall joints in sketchy strip malls). The location is probably why I drove past Wing King Café for about eight months after I moved to Steele Creek without ever going in, and those eight months could be in the running for one of my biggest life regrets.

Second, Wing King Café is not a café. Instead, you'll be walking into a sports bar with an old school tavern vibe, sports on all of the TVs, quippy art ("No shoes, no shirt, no pants, no service. Unless you're Cam Newton or Luke Kuechly"), a chatty and friendly staff and excellent wings.

I highly recommend that you head to Wing King Café to catch the big game, grab a bar stool and a cold beer, and get a little messy while you chow down on saucy wings. But takeout is also a viable option; we often turn to Wing King Café to supply the Buffalo wing component of our game day-spread.

Let's get the boring stuff out of the way first. If you're not into wings (although I'm not sure why you wouldn't be) Wing King Café also serves up traditional "bar food," burgers, sandwiches, French fries, onion rings and other deep fried goodness. So if there is a wing hater in your midst, no worries, Wing King has tasty food to accommodate them too.

Now onto the main event, the wings. There's something to please all of the wing lovers in your dining party or your Panthers' tailgate; with over 30 flavors to choose from, you can go traditional or try something different. Their standard sauces like medium and hot pack the right amount of flavor and spice, but some of their best wings are creative flavors like hot garlic parmesan, Cajun, honey gold or Ming's sweet chili. Although I am not a parmesan wing eater, my fiancé claims the only way to make decent parmesan wings is with actual parmesan cheese and you can bet that Wing King Café's wings are covered in the good stuff. 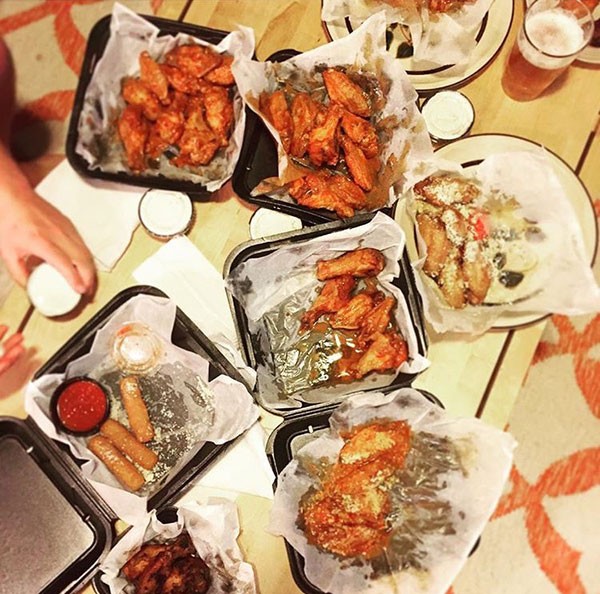 You can order batches of wings anywhere from 5 to 100, but beware, prices on the wings are just for one flavor; extra flavors are a dollar extra per flavor. We usually order the King Sampler, 25 wings of five different flavors so we can get a little variety without without having to pay a dollar extra. Wings come with their homemade bleu cheese or ranch, plenty of celery sticks, and a whole 'lotta wet naps for when you're done licking your fingers.

Chrissie Nelson is a public defender by day and a food blogger by night. Read about her foodventures, restaurant reviews and other Charlotte musings at offtheeatenpathblog.com.