Fist Fight as much fun as an ax to the head 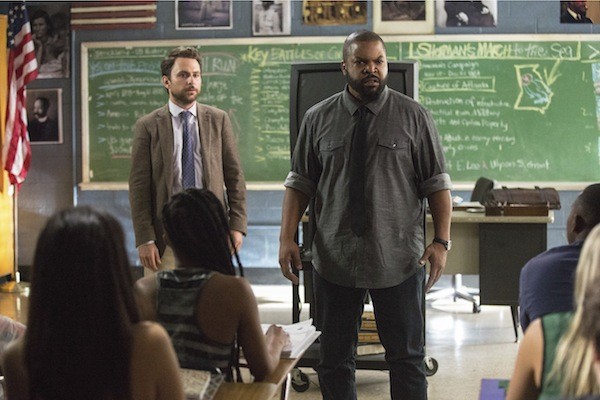 The appointment of the monstrous Betsy DeVos as Secretary of Education is the worst thing that could possibly have happened to the U.S. school system, but placing a very distant second would probably be the release of Fist Fight.

Aggressive in its insistence on being as awful as possible, this flagrantly unfunny film centers on the conflict brewing between two teachers at a high school where the students spend more time masturbating in the bathroom stalls and drawing penises on the blackboards than in cracking open textbooks. Mr. Strickland (Ice Cube) is the scariest teacher on the premises, while Andy Campbell (Charlie Day) is the wimpiest. After Andy snitches on Strickland in regards to an altercation with a student (an ax was involved), the latter educator finds himself without a job. Angered, he challenges Andy to fisticuffs immediately after the school day ends.

The remainder of Fist Fight involves Andy doing everything in his power to get out of the fight, including bribing a student to lie about the ax blow incident and planting drugs in Strickland’s satchel. Along the way, he receives poor advice from a fellow teacher (tedious Jillian Bell) who’s obsessed with sleeping with students and the coach (Tracy Morgan) who’s obsessed with sleeping with the students’ moms. Compounding Andy’s stress is the fact that his wife (JoAnna Garcia Swisher) is set to give birth at any moment and his daughter (Alexa Nisenson) has a musical competition that he simply cannot miss.

Ice Cube is a reliable screen presence, but he can do nothing with a film as utterly devoid of entertainment value as this one. Day, generally an acquired taste anyway, is insufferable as the whining teacher, and it’s hard not to root for Strickland to beat the living hell out of Andy. And when he’s through, maybe he can go after this rancid film’s creators as well.