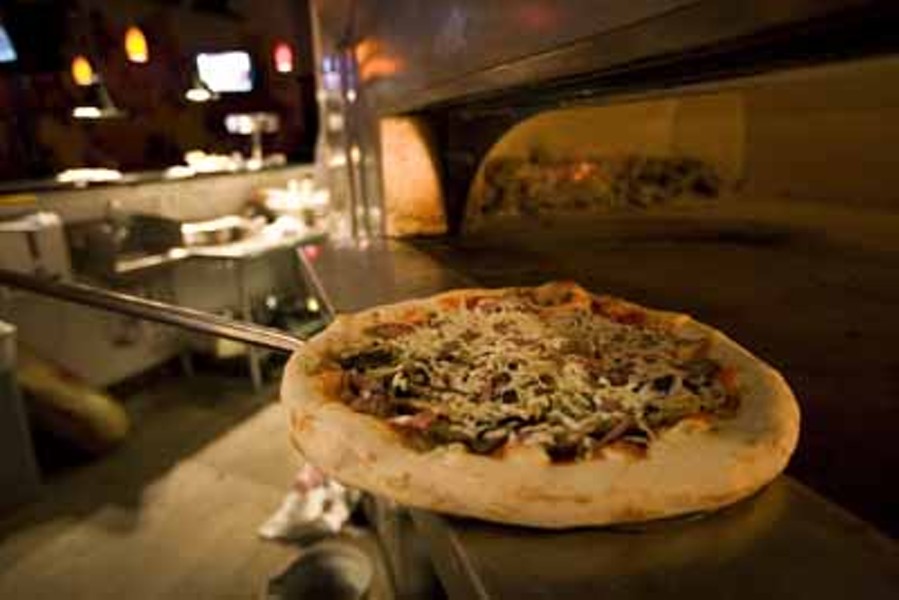 Last winter, when folks noticed "Dan Morgan's" on a soon-to-open restaurant sign in south Charlotte, they thought of the retired Pro Bowl and former Panther linebacker who played for seven seasons. After being released from the Panthers, Morgan signed as a free agent with the New Orleans Saints in March 2008, only to retire two months later. However, Morgan, a first-round draft pick in 2001 who has been plagued with injuries, was reinstated by the NFL in February 2009 and rejoined the Saints' roster.

Also in February, impresario Morgan opened the 130-seat Dan Morgan's Cheese Mo'z Coal Fired Pizza with his wife Ashleigh and the Charlotte-based BarFly Group. While a pizza joint may be a good defense in the current economic environment, owning a sports bar seems to be the ticket. The inspiration for a coal-fired oven baked pizza came from a fondness Morgan, a native of Florida, developed for the pizzas of a local south Florida chain, Anthony's Coal Fired Pizza, whose ownership includes football legend Dan Marino.

Coal is not a surprising choice for baking, nor for pizzas. After all, some argue that coal-fired ovens maintain a more stable heat environment than wood: Coal was used in many of the original Manhattan pizzerias at the turn of the 20th century.

The setting for Cheese Mo'z is a large-scaled room with an exposed ceiling, comfy booths, and televisions. One section of the dining room has a large format display fed by a projector which can easily be seen from the other side of the room while flat screens are bound back to back on support poles. More televisions reign overhead. On the walls are portraits of sports and entertainment stars and legends: Disney, Ali, Marilyn, Hendrix and Jagger. But the coal-fired oven, positioned to be viewed by most, delights even a casual kitchen snoop.

The food trinity of a good sports bar is wings, pizza and salads. While burgers may be substituted for pizza, wings are the defining food. The wings at Cheese Mo'z are not deep-fried, but baked in the 800-degree anthracite coal oven along with onions and, depending on the sauce, can vary from correct to fairly bland.

Pizza, I've decided, is as personal a relationship as the one people have with a higher power. Most are content with the relationship established in youth. But for me, that excludes too many good pizzas I've encountered. I have now adopted the "When I was a child, I spoke like a child ... When I became grown, I gave up my childish ways" approach. I prefer the smoky imbued crust of pizzas cooked at high temperatures for a short amount of time. The hotter the oven, the more moisture is removed from the dough, resulting in a crisper -- not lifeless -- crust with a slight char on the bottom. The oven at Cheese Mo'z bakes pizzas in four minutes.

But ultimately, the quality of a pizza comes down to a balanced taste. The pizza at Cheese Mo'z had the smoky crust, but I was disappointed in the heavy hand with the toppings. The "Super Star," a specialty pizza with homemade meatballs, was overpowered by layers of mozzarella and provolone so much so that the touted marinara with San Marino tomatoes was completely occluded. In fact, the layer of cheeses measured one third of an inch. With that amount of cheese, can any additional ingredient be lucid and compelling?

At the helm of the modest, uncomplicated menu is Chef Chris Swinyard, a graduate of the California Culinary Academy in San Francisco who's been in many Charlotte kitchens, including Dean & DeLuca, Bonterra and Cantina 1511. One of the signature pasta dishes at Cheese Mo'z is an odd arrangement of salmon, artichokes, penne and marinara. I understand wanting to include the flavors of cedar planked salmon on a signature dish, but salmon, artichoke and tomatoes do not belong together. Add to this the essence of cedar and the herbs in the marinara, and the dish is a skirmish, not a melding of flavors.

The pleasingly simple house salad works much better, is cheap -- four bucks -- and enough for two. But the fresh fruit cobbler dessert, which tastes more like a blueberry pancake than a cobbler, should be sidelined.

Entrees are $11 to $15; pizzas range from a naked 12-inch at $11.25 to the 16-inch specialty pizzas for $19. All the specialty pizzas have mozzarella, some add provolone. The beer list is long, the wine list skimpy. A kids menu offers price relief for parents.

The ownership's second restaurant venture, Sweet T's, is scheduled to open on Monday, April 27, next door. Cheese Mo'z is a work in progress, with good intentions and a marvelous spot to view a sporting event, um, like the Saints and Panthers game next fall.

Know of a restaurant that has opened, closed, or should be reviewed? Does your restaurant or shop have news, menu changes, and new additions to staff or building, upcoming cuisine or wine events? To be included in our online blog, Eat My Charlotte, send information to Tricia via e-mail (no attachments, please -- these are destined for the spam filter): [email protected].