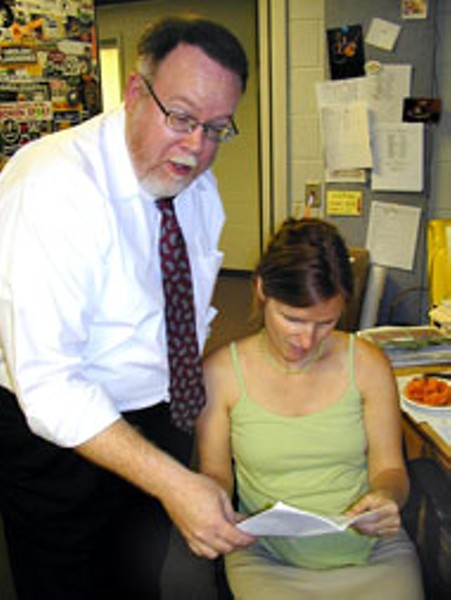 James Shannon Station Manager David Gordon and announcer Amy Jones believe WNCW's record speaks for itself
Pick any 10 serious music hounds in Charlotte and ask them to name their favorite radio stations; it's a sure bet at least half of them will say "WNCW." Charlotteans unaccustomed to much more than Clear Channel stations' limited commercial playlists may say, "Who?" but WNCW -- a publicly funded station operating on the campus of Isothermal Community College (ICC) in Spindale, NC -- has a wide array of fans in this area. In its nearly 14 years of operation, it has enriched the cultural life of a geographical area encompassing parts of both Carolinas and Tennessee while gaining national attention as a model for other non-commercial stations.So when it was revealed that ICC, the parent institution holding the station's FCC license, had embarked on a review process that raised serious questions about the future of WNCW, listeners were troubled. And why not? Those listeners had become accustomed to feasting on a diverse musical menu likely to feature Ziggy Marley and his dad Bob alongside Gillian Welch and Little Milton, with regular selections from Frank Zappa and the Grateful Dead and their musical legatees, with Ella Fitzgerald and Rhonda Vincent waiting in the wings, with David Wilcox, Ricky Skaggs and enough slices of country, folk, roots and bluegrass to make up a whole loaf of Americana.

The on-air broadcasts continue to maintain high musical standards, but behind the scenes, WNCW is a station under siege. A laundry list of charges and counter-charges have triggered staff upheavals, coupled with arrests and allegations of threats and myriad misdeeds. A complaint filed with the Federal Communications Commission resulted in an admonishment in 2001 that should be old news by now, although WNCW has been unable to put the controversy behind it.

These concerns have prompted the ICC Board of Trustees to direct Dr. Willard Lewis, the school president, to prepare a report evaluating the relationship between the college and its radio station. Everything is on the table, including the possibility that ICC could sell the radio station or shut it down. In Asheville, an independent group has established a website called PreserveWNCW.org that favors retaining the programming status quo at the station and is exploring the option of putting together an offer to buy the license from Isothermal.

Trash Bags, Awards, and the FCCSince signing on the air in October 1989, WNCW has carved out its own unique niche. The station's signal reaches a vast listenership in five states, thanks to its transmitter at Clingman's Peak on Mt. Mitchell. Additional translators have extended the signal to all of western North Carolina, upstate South Carolina and Eastern Tennessee, serving more than 50 rural counties as well as major population centers in Charlotte, Asheville, Knoxville and Greenville, SC.

Word spread quickly about WNCW, and the station experienced very rapid growth in listeners and support. As a public station, they receive some money from the Corporation for Public Broadcasting and certain in-kind contributions from the college. WNCW is one of only three public radio stations that receives money from the NC General Assembly to ensure that at least one public radio signal is available to every resident of the state. The lion's share of the station's operating funds comes from listeners, with much of it collected during two annual fund drives.

Those listeners continued to give as the station grew in reputation and influence. In a widely reprinted quote, Emmylou Harris said, "If Heaven had a radio station, it would be called WNCW."

These efforts did not go unnoticed on the national stage. WNCW Program Director Mark Keefe was twice named Programmer of the Year by Gavin magazine, the radio industry bible. But these days, battles between current or past volunteers and members of the WNCW staff and their various adherents have become an all-consuming fire that threatens the very existence of the station.

As crazy at it sounds, the first flash point in this controversy involves some trash bags left in the hall at the WNCW studios. At some point in 1999, then-General Manager DeLane Davis identified several bags of what were described as "aging premiums" and decided they should be disposed of. Two WNCW employees, Operations Director Linda Osbon and highly popular on-air host Marshall Ballew discovered the items, recognizing them as premiums given to listeners who donate money during fund drives. The items included CDs and autographed drumheads from bands including Widespread Panic.

Both Ballew and Osbon have subsequently said they thought throwing away items donated to the station was wrong. Osbon, who would later be dismissed when her contract wasn't renewed, says she traces her troubles with her then-boss Mark Keefe to her insistence he do something about the discarded premiums.

"It was my job to call people up to get them to donate those premiums," says Osbon. "If WNCW doesn't want them anymore, I felt they should at least return the items."