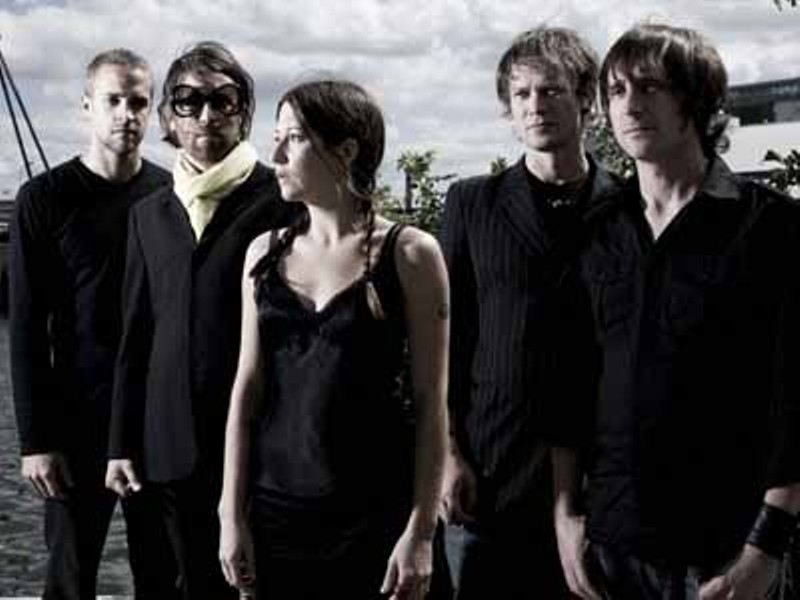 ALL TOGETHER NOW: Lowry

The Evening Muse was roughly half-full for the Find Your Muse open mic night last Monday, Feb. 16. In addition to those peforming, a handful of musicians were in attendance — not only to watch that evening's participants, but to check out the featured performer.

It didn't take long after out-of-towners hit the stage that things quieted down, heads bobbed, a random dancer could be seen in the crowd and the quintet's sound filled the room. That band was Lowry.

Based out of New York, the band includes former Charlotte resident and Hickory native Heidi Sidelinker. For her, it's a homecoming of a different sort. Not only did she live down the street from the venue, but she also used to work behind the bar there. While she doesn't hesitate to say she misses being around the club -- performing and the people -- it's also easy to see how content she is with her new bandmates and the music they create.

Sidelinker lived in Charlotte for two years before moving to New York City to become a full-time member of Lowry a couple of years ago. Now 27 years old, she had been performing as a solo artist for just under a decade when she met the band as they were passing through town. She was also once in a band called Autumn and August with well-known scenester Josh Panda.

"I was always focused on my solo career," Sidelinker says. "I opened up for Blues Traveler. I released two albums. Lowry was in town doing an residency at the Muse and staying with my friends who are in The New Familiars, and it was all just serendipitous to meet them."

She started going out and singing with the group from time to time after former members Claire and Sarah Bowman left the group and Lowry was looking for a new female voice.

"I originally came down (to Charlotte) with Josh because we had heard of this really amazing music scene and growing neighborhood (NoDa)," Sidelinker says. "I've always loved North Carolina and I still love it here. I once played Madison Square Garden for a festival and I knew it was where I needed to be -- it's saturated with music. It's amazing how it's all come together."

She knew the timing was right and that if it was going to work, she'd have to live in New York to facilitate practicing and songwriting. Her connections to the Queen City have made it easier on travel accomodations when the band is passing through town. Most of the band's touring is being done on the East Coast at this point to try and build the fan base. Her parents now live in Lincolnton, she has a friend with a place in Davidson and plenty of friends here in Charlotte. They simply stay with whomever is closest to the next gig.

Sidelinker hasn't given up on her solo work, though, saying she'd never survive without that creative outlet. "It took about six months for me to get balanced with the band and living up there to get to a spot where I could start writing again," she says. "I'm 100 percent into Lowry, but I'd go insane if I didn't have the outlet for songwriting." She says the band is supportive of her own work.

For Lowry, Alex Lowry does most of the lyrical songwriting, but the other members then come in to add their own touches and create something as a group. Sidelinker also contributes harmonies. "The band started out as a solo project for Alex, but now it's definitely a band," she says. "It's been that way for three or four years. It took some time to get over the feeling of being new and figuring out if it was right for me and right for the band. There's a huge difference now. Now, we all work so well together. We're all really close and take ownership in what we do."

Sidelinker says one of the biggest highlights of being in the band was performing at the All Points West Festival in New Jersey along with Radiohead. It seems fitting, as well, because of the band's own ambient, atmospheric, poetic style that's more upbeat than acoustic, but not quite full-on rock.

Though the band released an album, Love Is Dead, last fall, Sidelinker says they're already planning on heading back into the studio this spring. Currently, most of the band's setlist comes from that album, although they also perform some songs from the previous album, Awful Joy, as well as newly written tunes and songs from the Love is Dead sessions that didn't make the album.

As the band goes through its 30-minute Feb. 16 set, you can't help but assume they've won over some new fans. Shouts of "One more song!" are heard as soon as the final notes ring out and the band obliges with smiles and another tune.