Behind the man who schooled Spielberg, Lucas, Landis et al. 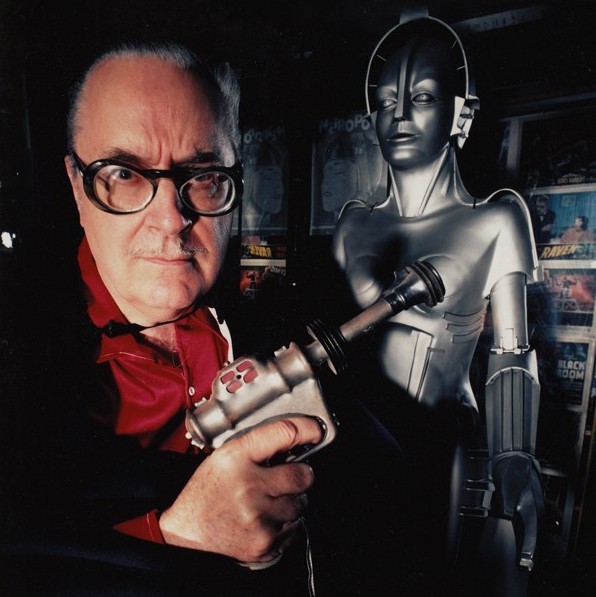 Forrest J Ackerman, who died in 2008 at 92, was known affectionately by countless nicknames, among them Forry, Uncle Forry, Dr. Acula, 4E, The Ackermonster and Mr. Sci-Fi. But who, you may ask, is Forrest J Ackerman?

"As much as Uncle Forry is beloved in fandom, he's under appreciated in the mainstream pop culture he so influenced," says Mad Monster Party co-creator Joe Moe. "The sheer amount of art, movies and moviemakers he inspired through his nurturing and mentoring just can't be measured."

Moe isn't kidding. As the editor of Famous Monsters of Filmland from its creation in 1958 through 1983, Ackerman earned the devotion of numerous fantasy-flick aficionados around the world (including a certain Creative Loafing film editor; see the accompanying letter and photo, both published in the pages of FM back in the day). To cite all of the A-listers who cut their teeth on Ackerman's groundbreaking magazine would be an exhaustive undertaking, but they include Steven Spielberg, George Lucas, Stephen King, Peter Jackson, Tim Burton, John Landis, Guillermo del Toro, Joe Dante, Rick Baker and Billy Bob Thornton. "The list of his disciples is endless," says Moe.

Ackerman was second to none as the leading science fiction authority; the World Science Fiction Society even handed him a special Hugo Award in 1953 as "#1 Fan Personality," the only individual ever so honored in the awards' 59-year history. He was also a literary agent, responsible for jump-starting Ray Bradbury's career and also representing Isaac Asimov, a young L. Ron Hubbard (in his period as a fantasy writer, not the later Scientology stage) and more than 200 other authors. He made cameo appearances in dozens of films, including Dante's The Howling, Jackson's Dead Alive and Landis' The Kentucky Fried Movie. He counted Bradbury and FX legend Ray Harryhausen among his close friends. He's been credited not only for coining the term "sci-fi" — a shorthand so detested by author Harlan Ellison that he said it sounded like "two crickets screwing" — but also being the first person to show up at a fantasy convention in costume, in 1939, a trend that has since exploded. And then there was his private residence: The Acker Mansion & Museum in Los Angeles, home to the greatest collection of fantasy-film memorabilia ever assembled in one space.

Moe is quite familiar with the collection. "I was caretaker and best pal to Ackerman in the final years of his life," he says. "I lived with him in his Acker Museum of 300,000 props, books and artworks." But also familiar with the collection are the innumerable film fans who over the years visited the home for tours, which Forry was always happy to give ... for free. While many of the names once scrawled in the mansion's guestbook are recognizable — Vincent Price, Mark Hamill and Gene Roddenberry, for starters — most of the tens of thousands of visitors were everyday people interested in seeing items from silent classics like Metropolis (Forry's all-time favorite film) through Golden Age touchstones like Dracula and Frankenstein and all the way to modern blockbusters like Raiders of the Lost Ark. Ackerman treated all his guests with grace and good cheer.

For Ackerman devotees who will attend the Mad Monster Party, or for those simply wanting to learn more about the man, there will be an "Uncle Forry Tribute" at 11:15 a.m. Saturday. "We want to celebrate him and introduce him to new fans who will benefit from his spirit of wonder and generosity," explains Moe. "While Phil Kim, publisher of Famous Monsters of Filmland, is the owner of the trademark for Forry's name and likeness, he graciously gave us his blessing to pay tribute to Forry."

Along with the panel discussion, there will be a screening of The Life After Death Project. "Filmmakers Paul and Hollace Davids will be on hand to talk about the strangeness that's been going on since Forry 'departed," Moe continues. "Will his ghost haunt the halls of our show? That would be fine with me. I love and miss that ol' guy a lot."