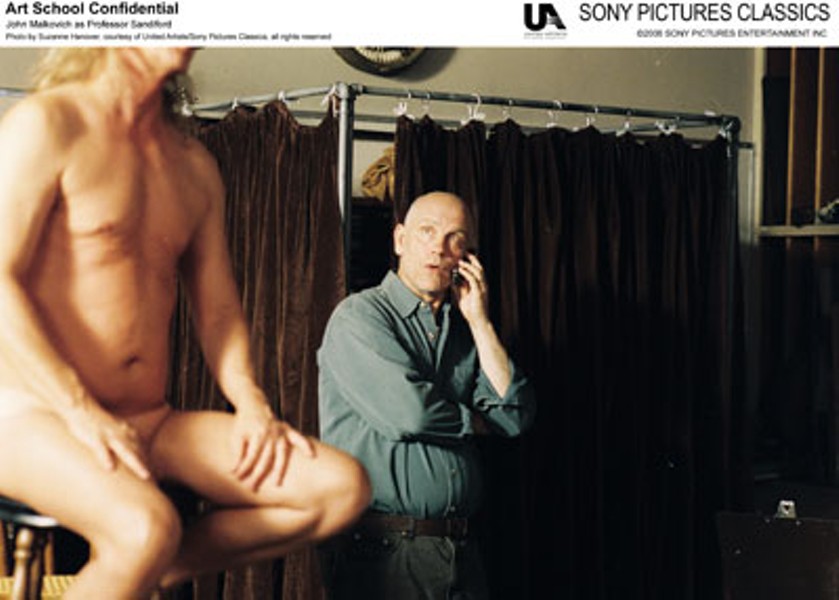 ART SCHOOL CONFIDENTIAL Jerome Platz (Max Minghella), a freshman at the Strathmore art school, has two ambitions in life: to become the greatest artist in the world and to get laid. That one objective never seems to take precedence over the other makes sense. After all, what college student can truly contemplate the Big Picture when immediate approval and gratification might be within grasp? Art School Confidential, from the Ghost World team of director Terry Zwigoff and writer Daniel Clowes, starts out as a great movie that eventually devolves into a pretty good one, as a stinging expose of campus life gives way to the more rigid narrative demands of a police procedural. Somehow managing to be even more cynical than the pair's previous works, the movie follows Jerome as he discovers that it's almost impossible to become a master practitioner of his craft when his teachers turn out to be hypocrites (John Malkovich is aces as one of these pretentious profs) and his fellow students produce amateurish works that are instantly hailed as cutting-edge. He finds his muse in an artist's model (Sophia Myles) who, naturally enough, gravitates toward the hunkiest student (Matt Keeslar) in the class, and he ends up absorbing dubious life lessons from a decrepit alumnus (Jim Broadbent) who has long been resigned to a life of anonymity and alcohol. Burdened with so much disillusionment, it's no wonder that Jerome devotes little thought to the fact that a serial killer is trolling the campus grounds. Adapted from Clowes' comic story, Art School Confidential works best when it expertly taps into the uncertainties of an adolescent existence suddenly liberated from the confines of home and family, or when it deconstructs the notion of what truly constitutes being a success or, conversely, a failure in one's chosen field. It's at its weakest when it clumsily tries to tie together its points by employing a sensationalistic device that detracts from its astute observations. ***

AKEELAH AND THE BEE The pattern holds that every decade's midway stretch gives us an underdog worth supporting. In the 1970s, it was Rocky, in the 1980s, it was the Karate Kid, and in the 1990s, it was Babe. And now here comes 11-year-old Akeelah to carry the torch for the little people. Akeelah and the Bee, which in addition to its underdog roots also manages to come across as a mesh between the documentary Spellbound and Boyz N the Hood refitted with a happy ending, centers on Akeelah Anderson (Keke Palmer), a south LA girl who, with the help of her mentor (Laurence Fishburne), works her way through the national spelling bee circuit. What sets the film apart is the manner in which it details how Akeelah's triumphs end up lifting the entire community: Her success is their success, and it's truly inspiring to watch neighbors from all walks of life throw their support behind her. There's no need to hide that lump in your throat or tear in your eye -- this movie earns its sentiment. ***

AMERICAN DREAMZ The decline of the American empire -- or at least the dumbing down of its populace -- began in earnest some time ago, but it has clearly reached its zenith with the twin threat of the Bush presidency and reality TV. Both, of course, are obvious targets for satire, but it's hard to mock something that in itself is already a mockery of sorts. Writer-director Paul Weitz nevertheless takes a stab with this comedy that ties together a moronic talent show hosted by a callow Brit (Hugh Grant) and a clueless US prez (Dennis Quaid) unable to think for himself. American Dreamz is a crushing disappointment, a weak-willed, ill-conceived film with a scarcity of laughs and a maddening tendency to let its subjects off with a slap on the wrist rather than go for the jugular. Lacking the lockjaw clench of a Dr. Strangelove or a Network, it's content to offer toothless stereotypes and defanged targets. This isn't a black comedy -- it's more like a whiter shade of pale. **

FRIENDS WITH MONEY Movies like Friends With Money can often be termed "slice of life" films, but when they're as tasty as this one, a slice won't suffice: We end up longing for the whole pie. Set in LA, this rich seriocomic gem centers on the daily activities of four close female friends. Three of them indeed have money: screenwriter Christine (Catherine Keener), clothing designer Jane (Frances McDormand) and stay-at-home mom Franny (Joan Cusack). The friend without money is Olivia, whose lifestyle forces the others to reflect upon their own circumstances. I greatly enjoyed writer-director Nicole Holofcener's previous two pictures, 1996's Walking and Talking and 2002's Lovely & Amazing, but this might be her most accomplished work yet. Her greatest strength as a writer rests not in her dialogue (though it's top-grade) but rather in the manner in which she proves to be enormously generous of spirit with all her characters. ***1/2