As a rule, Vietnamese cuisine, with its clean, herbaceous flavors, doesn't lend itself to palate confusion. Even stir-fries and rice crepes have distinct flavor profiles that rely heavily on the talents of the cook to create a tapestry of textures and a balance of sour, salty, sweet, hot and bitter. But much of the final taste is left to the diner, since Vietnamese cuisine is expected to be interactive. Thus, soups and crepes posse up with bottles of hoisin, chili paste and overflowing platters of fresh mint, leaf lettuce, holy basil, Vietnamese cilantro, mung bean sprouts, lime wedges and jalapeño slices — or, in summer, Thai bird chilies. A Vietnamese dish requires attention.

In no other dish is this truer than in pho, and the pho at Doan's Vietnamese Restaurant rocks. Here, the cilantro-scented beefy broth (southern Vietnamese style, if it matters to you) bears hints of cinnamon, exotic star anise, ginger, cardamom and black peppercorns. All this is laced with satiny rice noodles and paper-thin slices of steak. The trick is to allow the herbs — picked from that overflowing platter — to melt into the broth before you dive into it with chopsticks and a spoon. Yum.

The kitchen at Doan's turns out other soups, too: chicken broth with a choice of noodles and proteins; a spicy beef noodle soup in a lemongrass broth; and hot pots. The latter have become increasing popular with the Charlotte Vietnamese expat community. Hot pots are Vietnamese fondue: the broth is heated in a pot in the center of the table, and foods selected from the menu are added to it. Most common hot pot additions are cabbage leaves, shrimp, mushrooms, thinly sliced meat and dumplings. Once cooked, these are dunked into a dipping sauce. 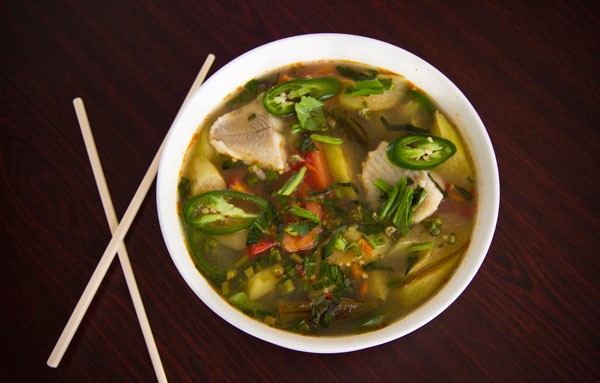 However, the best soup to ward off winter chills at Doan's is its fisherman's soup, canh chua ca. Those who remember James Le's outstanding fisherman's soup at his Taste of Asia (sold in 2003) will want to order this soup here. The broth is a kaleidoscope of sharp, sweet and sour. Sharp emanates from the peppery rau ram (Vietnamese coriander) and sweet from the pineapple. Both are offset by the sour of tamarind. Crunch is added to the soup by bac ha (a spongy celery), beansprouts and okra. The fish at Doan's is river (catfish), not ocean, which I prefer. But shrimp is an earnest substitute. Canh chua ca is ladled over white rice and spiked with house-made chili oil.

In addition to soups, Doan's has the expected roster of Vietnamese dishes. One rice vermicelli dish is quite lush with its ingredients and lovely to look at. Slices of grilled pork hug the edge while another round of crispy egg roll morsels and cucumbers blanket the bottom layer of noodles and green lettuce leaves. From the starter list, the quail is not crispy enough, although it is beautifully plated. Better are the crispy rolls with taro, chicken and shrimp, which are mindlessly addicting, and the rice paper rolls, with a shelf life of five minutes.

The menu also has — trying to be all things to all people — Pad Thai and Singapore Noodles. When Doan's first opened, it offered banh mi — the only place to get these Vietnamese sandwiches in south Charlotte. Unfortunately, it discontinued the sandwiches when it put the hot pot on the menu. Too bad.

Doan's is located in a strip shopping center with an imposing parking lot, a space that was formerly Pho 98, another Vietnamese restaurant. Although the interior is functional, it is not inviting. The service team, on the other hand, is well-informed and helpful.

Nga Thai and her chef husband Hai Pham opened Doan's last summer. They owned a Vietnamese restaurant in Richmond, Va., for 13 years before relocating to Charlotte. Son Andy, who also works at Doan's, reports that the restaurant is in the final stages of acquiring a beer and wine license.

This Sunday, Feb. 10, the Vietnamese celebrate New Year, or Tet, a week-long event where people eat special foods and offer tributes. If you go to Doan's during Tet, keep in mind that duck or shrimp are considered unlucky to eat during the New Year festivities. However, the entrées and well-crafted soups at Doan's are inexpensive — most under 10 bucks — and portions are hefty. Lucky you.