How to eat yourself to death 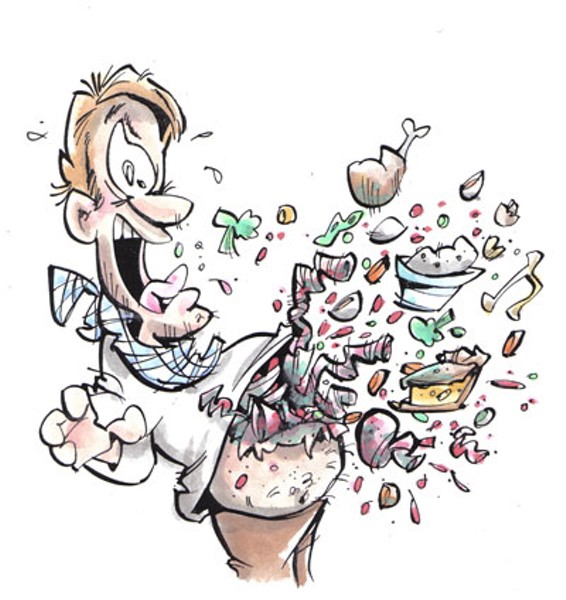 You've heard it a hundred times. Everyone has finished chomping and slurping their way through a huge Thanksgiving dinner and somebody lying on the couch, probably your dad or an uncle (maybe you), groans: "God, I ate so much, I feel like I'm gonna burst" (or "bust," depending on whether or not your family is Southern).

Did you ever stop to wonder if that's really possible? Could you really eat so much your stomach would blow wide open? In short, can you eat yourself to death? The answer is "It's not easy, but yes, you can."

Luckily for us, San Francisco writer Mary Roach, author of Spook: Science Tackles the Afterlife and Stiff: The Curious Lives of Human Cadavers, has studied the subject. She even wrote an essay titled "Unhappy Meal" for Salon.com in December 1999, which has become a kind of cult morbid-interest story for people who like that sort of thing.

Roach says, "I've always had a habit of morbid inquiry, I suppose. . . I always eat like a pig at Thanksgiving and I've wondered while I'm eating, you know, if I just keep going, what would it take for my stomach to burst? (laughs) So I was trying to come up with a post-Thanksgiving story and I went to pubmed.org [a Web site of the National Library of Medicine] and keyed in things like 'stomach,' 'burst' and so forth, and went from there."

When your stomach bursts, it doesn't literally pop open and allow your latest feast to fly out onto the floor. What happens is your stomach ruptures and billions of bacteria flood the surrounding area inside your body, creating a giant systemic infection that usually kills you within hours. But no, your gut doesn't explode like something from a warped Warner Bros. cartoon.

How much do you have to consume before your stomach rips open? There's no one, clear answer. Roach tells of French and German doctors in the late 19th century who experimented with cadavers and concluded that a mere four liters of food would kill you. Since then, untold numbers of gluttons have broken the four-liter barrier and survived.

"I see people on Fear Factor or those food-eating contests who eat more than that," says Roach. "A lot of it depends on how much your stomach is already stretched before you get started. I think all they (the French and German doctors) determined was how much that particular person, as a cadaver, could eat before his stomach burst (laughs)."

Here's some good news: If you want the undeniable cachet that comes with having eaten so much your stomach burst but you don't want to be called a glutton, have no fear, you can do it. The trick is to starve yourself for a while, say, for a few months, and then you won't have to scarf a ton of groceries to split your tummy. As Roach reports, a number of former World War II POWs died from overeating once they were presented with all the food they could handle. One poor British soldier's stomach must have shrunk dramatically during his prison days because all it took for him to expire from gastrointestinal excess was two quarts of soup, one quart of coffee, a half pound of bread and some potatoes, all consumed over the course of one day.

No one really knows who has eaten the most food before busting a gut, but Roach thinks it might be a bulimic 23-year-old London fashion model who, during one epic binge, packed away 19 pounds of food: a pound of liver, two pounds of kidney, an eight-ounce steak, a pound of cheese, two eggs, a cauliflower, a couple of slices of bread, 10 peaches, two apples, four pears, four bananas, two pounds of plums, two pounds of carrots, two pounds of grapes and, lest she become parched, two glasses of milk. She died.

I know what you're thinking: How will I know when to quit eating? How will I know when my stomach has successfully burst? After all, I don't want to waste any food if I've already reached my goal. Doctors say you needn't worry. When your stomach gives up the ghost, you'll probably hear a popping noise or, as one medical authority quoted by Roach put it, a "sudden explosion," along with a sensation of "giving way."

A word of warning before you embark on your belly-busting Thanksgiving binge. If you happen to get more than halfway to the bursting point and you change your mind about the wisdom of risking death just for the sake of having something cool to talk about next Thanksgiving, do not, repeat do not take Alka-Seltzer. Roach reports on a woman who in 1941 packed away "macaroni, meatballs, cheese, tomatoes, potatoes, bread, pie, three glasses of grape juice and several shots of whiskey" and who, experiencing "heavy feelings" in her gut, took some bicarb in water. You guessed it. The gas from the fizz ballooned her stomach past its limit, it burst and she died soon after. The lesson here: Don't dabble in half-measures. If you're gonna go bust, go all the way or don't start at all.