THE CAR (1977) / ZOMBIE HIGH (1987). Shout! Factory's Scream Factory arm offers its own take on The Nightmare Before Christmas by serving up two tepid terror tales the week before the holiday.

Although it might seem that The Car is a rip-off of Duel, it actually feels more like it's stealing from another Steven Spielberg title: Jaws, with an automobile instead of a shark. Here, it's James Brolin who's cast as the law officer, doing his best to vanquish an unstoppable killing machine and even expressing concern over a planned event (a school parade rather than a day at the beach) sure to serve up plenty of victims. The direction by Elliot Silverstein (A Man Called Horse, a handful of Twilight Zone episodes) is accomplished enough, and there's some impressive vehicular stuntwork on display. But the film eventually grows tedious, and the climactic showdown is truly awful. Incidentally, since this was made in the non-PC '70s, expect to see many of the likable characters meet grisly ends while the most despicable person, a racist, wife-beating alcoholic (R.G. Armstrong), gets to be a hero! 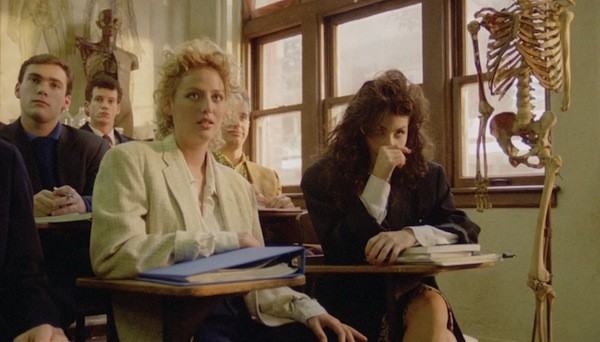 Actual zombies are nowhere to be found in Zombie High, which instead comes off as a poor hybrid of The Stepford Wives and a vampire flick. Virginia Madsen stars as a new student at a preppy boarding school where practically all of the students exhibit few emotions. The movie's alternate title was The School That Ate My Brain — a better moniker would have been Reagan High, since it's obviously a satire (albeit a weak one) on the conservative conformity running rampant during the 1980s. The cast also includes Sherilyn Fenn a mere three years before playing Audrey Horne on TV's Twin Peaks and Paul Feig decades before he directed such box office hits as Bridesmaids and Spy. A peek at the credits also reveals the participation of Trumbo director Jay Roach, serving as camera operator, and Twin Peaks co-star Eric DaRe (Leo Johnson on the series), credited as a casting assistant.

FANTASTIC FOUR (2015). Another reboot, another disappointment. The Incredible Hulk was only slightly better than Hulk, while Mark Webb's Spider-Hipster films couldn't begin to compare to Sam Raimi's Spider-Man flicks (the first two, anyway). So while it may be true that this Fantastic Four is an improvement over the 2005 version (and perhaps its 2007 sequel, Fantastic Four: Rise of the Silver Surfer), that's really not saying a damn thing. Based on an updated take on the squad as opposed to the property first created by Stan Lee and Jack Kirby back in 1961, this finds our fab four much younger than in previous incarnations — think along the lines of Muppet Babies and you're halfway there. There's brainy Reed Richards (Miles Teller) and cocky Johnny Storm (Michael B. Jordan), and there's Sue Storm (Kate Mara) and Ben Grimm (Jamie Bell). Yes, the last-named characters are so devoid of personality or quirks that I'm hard-pressed to think of any adjectives to describe them. At any rate, after nearly an hour of sluggish exposition — while these types of films often don't have enough exposition, this one has too much — the quartet finally are exposed to the mysterious green glop that turns these meddling kids into something more than human. And let's not forget resident bad boy Victor Von Doom (Toby Kebbell), who got the brunt of the goop and now roams around as the misshapen, godlike Dr. Doom. None of the skilled actors are bad individually, but thanks to inert writing and direction, they're never allowed to establish any chemistry among themselves. There's an anemic battle at the climax, and then it's all over, leaving in its wake disappointment, disillusionment, and the threat of a sequel in 2017.

Blu-ray extras include a making-of featurette and a piece on the film's score.

PAN (2015). One of the most colossal bombs of the year — it lost even more money than Fantastic Four and Tomorrowland — Pan is yet another film inspired by J.M. Barrie's beloved Peter Pan. With origin stories all the rage these days (Maleficent, Oz the Great and Powerful, etc.), this one introduces Peter (Levi Miller) as an orphan who's kidnapped (along with other boys) and taken to Neverland, where he's expected to toil in the mines under the order of the pirate Blackbeard (Hugh Jackman). There, Peter meets a young man named Hook, a cocky devil-may-care sort who becomes the boy's unlikely buddy (as Hook, Garrett Hedlund is under the impression he's Harrison Ford playing Han Solo in the original Star Wars). Peter learns he can fly, Blackbeard fears that the lad is the one prophesied to lead the insurgence against him, and Hook falls for a local known as Tiger Lily (Rooney Mara). It's all broadly played and only intermittently engaging, and there's little here to deepen our understanding of all these familiar characters. Wendy is nowhere to be found — presumably, she was going to be introduced in a sequel that now probably won't happen,— and the fairies (including Tinkerbell) are merely twinkly special effects who speak with the voices of Alvin and his infernal chipmunks. But hey, it could be worse. It could be Spielberg's Hook.

Blu-ray extras include audio commentary by director Joe Wright; pieces on Jackman and Miller and the characters they play; and a tour of Neverland.