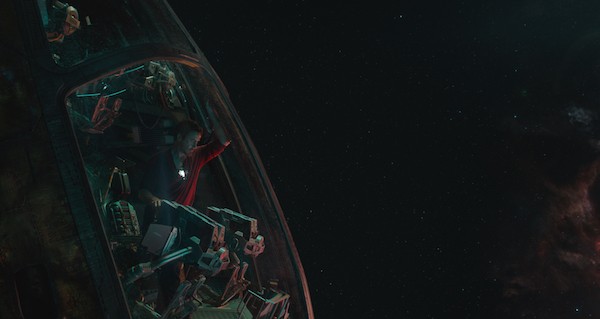 Let’s be real here. Avengers: Endgame (***1/2 out of four) could have been nothing more than three hours of, say, Tony Stark/Iron Man (Robert Downey Jr.) teaching Nebula (Karen Gillan) how to play Paper Football and it would still gross a kazillion dollars and be crowned the greatest superhero movie ever made. After all, when it comes to Marvel material, hope and hype eventually become the same thing, an impenetrable fortress of elevated expectations designed to ward off any hints of criticism or feelings of disappointment, particularly within oneself. And if that nudging of negativity comes from someone else, it’s even worse.

There’s a reason fans of superhero flicks have become their own entity, unlike any other group of moviegoers past or present. If you’re one of the 16 (out of 356) critics on Rotten Tomatoes who gave Roma a rotten review, who cares? If you’re one of the three (out of 265) critics who ruined Eighth Grade’s perfect 100% RT score, nobody bats an eye. But if you’re one of the 144 (out of 325) critics who trashed Man of Steel, brace yourself for the death threats. And if you’re one of the 64 (out of 427) reviewers who “splatted” Avengers: Infinity War, prepare to be despised with a passion greater than that usually reserved for terrorists and child molesters (and if you’re female, take that anger and quadruple it; silly female brains!). It’s a lamentable facet of modern society — one clearly heightened by the omniscience of the Internet — and it’s embarrassing for those who can appreciate comic-book flicks yet still realize it’s OK to accept differing opinions and justified criticisms without immediately wanting to shoot the messenger.

So take a deep breath, put away those pistols, and behold Avengers: Endgame. As the culmination of the 22-film saga collectively falling under the Marvel Cinematic Universe umbrella, it’s a staggering achievement, as impressively linked in its world-building and its mythmaking as the Harry Potter and Lord of the Rings sagas. Is it the best superhero movie ever made? In the immortal words of Balki Bartokomous, “Don’t be ridiculous.” It’s the longest superhero movie. It’s possibly the most expensive superhero movie. It’s certainly the most superhero movie. But there are at least a dozen super-sagas superior to this one, some residing within the MCU itself (the Captain America titles The Winter Soldier and Civil War, Black Panther, and the very first Avengers flick, if we’re naming names). And as far as comic-based stories with similar themes and execution, it’s no better or worse than the exemplary non-MCU effort X-Men: Days of Future Past. Nevertheless, this ranks among the upper echelons of this particularly robust genre, and it closes out this phase of the Marvel dynasty in rousing fashion. (Yes, technically, the upcoming Spider-Man: Far from Home is part of this phase, but this one feels like The End.)

Spoilers would be appreciated by absolutely no one, but there’s certainly no problem in relating the opening events, which occur immediately following the conclusion of Avengers: Infinity War. As we all remember from last summer’s theatrical showings (as well as subsequent visits on Blu-ray or DVD), Thanos (voiced by Josh Brolin) had acquired all six Infinity Stones that were required for him to wipe out 50 percent of the universe’s population. That meant a lot of superheroes went up in smoke, with the remaining good guys — an assortment that includes original Avengers Iron Man, Steve Rogers/Captain America (Chris Evans), Natasha Romanoff/Black Widow (Scarlett Johansson), Bruce Banner/Hulk (Mark Ruffalo), Clint Barton/Hawkeye (Jeremy Renner) and Thor/just Thor (Chris Hemsworth) — feeling the weight of their failure. But here comes Captain Marvel (Brie Larsen) to save the day — and the universe! Right?

Well, not exactly. To say that Avengers: Endgame is a movie of many surprises is putting it mildly. Certainly, there are some expected character beats, some predictable visual cues, some anticipated speechifying. But these bits come across less as obvious annoyances and more as savvy fan service, right in line with keeping customers satisfied. At any rate, they’re quickly surpassed by the unexpected directions taken by this picture. Only an ostrich wouldn’t know that some permanent sacrifices are required to defeat Thanos, but the guessing game will leave just as many viewers right as wrong. Likewise, the extent of Thanos’ evil deed affects the surviving heroes in different ways, but the identities of those who crumble and capitulate might shock. And even given the premise, the last movie I ever expected to hear name-dropped in an MCU effort (a John Cusack flick) gets a shout-out, so kudos for that.

At three hours, Avengers: Endgame never wears out its welcome, though one of its many journeys does feel like one too many, particularly since it results in not one but two ridiculous coincidences. The erratic CGI wizardry that allows actors to appear as their younger selves seemed to have finally turned the corner with the excellent de-aging effects witnessed in Captain Marvel, but here there’s an unfortunate reversal of fortune, with one actor looking like a cut-rate waxworks version of himself. And let’s not even get started on the number of plotholes that are a direct result of the storyline’s hopscotching (ones prominent enough to make me consider dropping the rating a half-star).

Still, what matters most — and what elevates the entire picture — are the emotional beats. Those looking for the usual repetitive fight sequences that often clog the pores of superhero flicks will be disappointed, since there’s truly only one gargantuan battle royale. Wisely, the focus is instead on the human (and alien) element, with many of the series stars turning in some of their best work. Johansson, always a highlight in this franchise, sports a particularly haunted demeanor that’s almost startling in its rawness, while Gillan develops Nebula in a manner that was previously unimaginable. As Scott Lang/Ant-Man, Paul Rudd provides some much needed levity — a scene in which he’s mocked by Rocket Raccoon (voiced by Bradley Cooper) left me laughing the hardest — while Evans again embodies everything we find noble in our fellow humans. And then there’s Downey, who hasn’t been this affecting in the role in quite some time. Brittle, harsh, and faced with impossible choices, his Iron Man reclaims his position as — with apologies to Cap — the original Avenger, the first superhero in this 11-year-long, 22-film-spanning saga. Watching Tony, Steve, Natasha, Bruce, Thor and Clint together for what might be the very last time — well, it’s enough to make a grown fan cry.