Examining bishops as big as bottlecaps in The Irish Curse 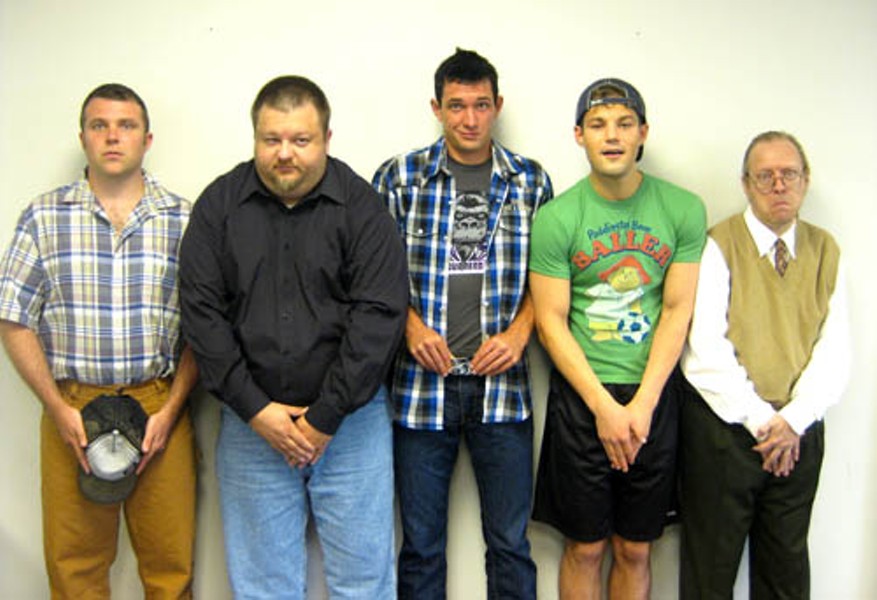 STANDING SMALL: The guys discuss their shortcomings in The Irish Curse.

Back in the ancient days of the Charlotte Coliseum, when our new NBA franchise was setting new attendance records, I did a couple of front-page cover stories on Hornets-mania, seasons one and two. For a few precious games each year, I had access to the pre-game chow laid out for the press, the behind-the-backboard squatting spots reserved for photographers, and the post-game interviews in the locker rooms. I slung questions at the local heroes, Rex Chapman and Kelly Tripucka, and at the two visiting MVP interviews of that era, Danny Ainge and Charles Barkley. And I beheld the godly Hakeem Olajawon in all his naked glory. The man was, as the saying goes, seriously hung; and it took all my professional poise to keep from dropping my pen or my jaw.

That was probably the last time I gave any extended thought, serious or otherwise, to the size of a man's genitalia — until last Friday night, when I caught up with Queen City Theatre Company's production of The Irish Curse at Spirit Square. The five men in this comedy-drama, set in a basement meeting hall of a Brooklyn Heights church, are at the opposite end of the penile spectrum from Goliaths like Hakeem. They're not so much a therapy group as an AA group, ventilating to guys with a similar infirmity and presumably gleaning comfort from shared misery.

Each confessor — it's a Catholic church — stands, states his name, and appends: "And I have the Irish curse." Joseph Flaherty, a lawyer from Savannah played by Hank West with a diffidence just shy of Don Knotts, was abandoned by his wife for a man with a larger package. We're spared the sight of genitalia in Martin Casella's script, but each man provides a graphic enough description. Flaherty reckons the depth and girth of his flaccid willy to be about equal to a bottlecap.

All five men in the group, in one way or another, have been devastated by their shortcomings — including Father Kevin Shaunessy, who runs the group. The ecology of the group has apparently been grumbly and static until the arrival of Keiran Reilly, an Irish immigrant barely off the bawt. He's an inquisitive little cookie — I'm thinking Keebler in Aaron Mize's winsome portrayal — getting the other group members to explore their problem more deeply and consider what they're planning to do about it.

Setting the play in a Catholic church is a pretty savvy move. Father's providence prevents the manly dialogue from devolving into sheer lewdness and exhibitionism — and when the comedy premiered in New York, Shaunessy could deflect the prevalence of the affliction to Boston, where he maintains that the plague is pandemic.

Keeping a loose rein on the cursing and the membership (there's a gay NYPD officer in the brotherhood), Shaunessy is as much a pivotal character as Keiran. Under the direction of Glenn T. Griffin, we get the most relaxed and unaffected performance I've seen from John Hartness, topped off with a hint of holy serenity that cracks convincingly under stress. Before that happened, I had a difficult time accepting all the men's supersized sensitivity.