BROOKLYN, N.Y. (January 12, 2021) - Emmy Squared will open in Charlotte later this year. Projected to open Summer 2021, the team from Emmy Squared is working with Thrift Commercial Real Estate and Asana Partners to assist with the entrance into the Charlotte market. Location details are forthcoming.

Emmy Squared first opened in 2016 with a small restaurant in Brooklyn, eventually growing to 3 New York-area locations - all serving amazing dishes in an approachable atmosphere. Oftentimes, you can still find Emily Hyland, one of the founders, greeting guests or talking with tables. Today, Emmy Squared has locations in New York City, Nashville, Louisville, Philadelphia, and Washington, D.C..

Emmy Squared’s Detroit-style pizza is marked by its square shape, crispy bottom, fluffy dough, cheesy “frico” crust, and signature sauce stripes applied post bake. In addition to the menu of red and white pizzas topped with unique flavor combinations, Emmy Squared offers an impressive menu of unique sandwiches, salads, and appetizers - all prepared with quality ingredients. Emmy Squared’s double-stack burger, the Le Big Matt, was named “#1 Best Burger in Nashville” by The Tennessean and Nashville Lifestyles, voted one of “The Best New Burgers in NYC” by Gothamist, and listed as one of the “20 Best Burgers in NYC” by The Infatuation. In 2017, The Today Show recognized the burger as “The Best Burger in America.”

The Emmy Squared team plans to open doors in Charlotte in Summer 2021, following any COVID guidelines and/or restrictions in place due to COVID-19. 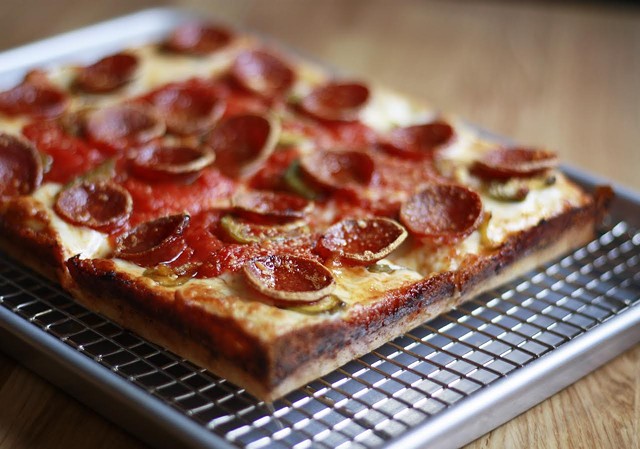