Plus, a Sly tribute and a painful Fall

THE LIFE BEFORE HER EYES 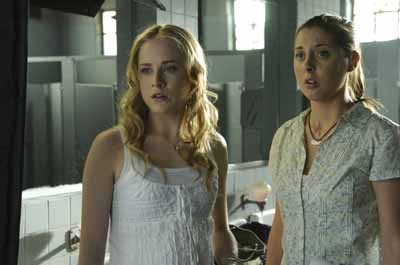 The Life Before Her Eyes (***1/2 out of four) runs the risk of being dismissed as a crass and tasteless attempt to make an exploitative movie out of the rash of Columbine-style massacres. The fact that it contains a cinematic sleight-of-hand more likely to be found in a glossy Hollywood thriller only adds further fuel to the fire. But in adapting Laura Kasischke's novel to the screen, director Vadim Perelman (stepping behind the camera for the first time since his exemplary debut with 2003's House of Sand and Fog) and scripter Emil Stern refuse to be cowed by the material, and the result is a haunting drama of enormous power, the type of movie that deserves to be remembered and discussed long after the projector grows cold.

Raleigh native Evan Rachel Wood (in the best performance of her still-burgeoning career) stars as Diana, a rebellious teenager who, along with her saintly best friend Maureen (Eva Amurri, equally excellent), gets trapped in the girls' bathroom by a disgruntled teenager who's systematically blowing away students and teachers alike. Cut to 15 years later, and the adult Diana (Uma Thurman) is still trying to cope with the events of that tragic day. As the movie moves back and forth through time, audiences are asked to keep pace with the narrative threads that point toward how all of this will end. And while doing so, they're also subjected to an affecting tale of wayward youth, as well as a somber meditation on how the choices we make will shape our perceptions, our actions and, ultimately, ourselves.

That's a lot to ask moviegoers to absorb, but discerning viewers will find the experience worthwhile. Sadly, the film presently holds a dismal 22 percent approval rating on the Rotten Tomatoes critical community Web site. Just ignore the critics -- in this case, we don't know what we're talking about.

WITH ALL FOUR Rambo flicks hitting DVD in a lavish new box set (see this issue's View From the Couch for a review), now's as good a time as any to check out Son of Rambow (*** out of four), a British coming-of-age yarn whose central premise is that a Sylvester Stallone actioner can influence budding filmmakers as much as any classic ever crafted by Welles, Hitchcock or Lean.

Set in a small English community in the 1980s, this sweet fable focuses on Lee Carter (Will Poulter), a mischievous lad who's always getting into trouble, and Will Proudfoot (Bill Milner), a quiet boy who belongs to a strict religious sect that forbids most contact with the outside world and its trappings (such as film and television). Lee bullies the naive Will into serving as the stuntman on the action flick he's creating for the sake of a TV competition (Screen Test, an actual U.K. series back in the '70s and '80s); once Will watches First Blood, Lee's inspiration for his own film, his imagination is fired by this taboo medium and he throws himself wholeheartedly into the project.

It all sounds a bit precious, but Milner and especially Poulter are such charismatic young performers that they inject Son of Rambow with some genuine poignancy (both boys lack father figures, to say nothing of friends) to go along with the expected comic shenanigans. And the word is that even Sly Stallone gave this film a blessing, marking one of the few times that the guy involved with the likes of Judge Dredd and Stop! Or My Mom Will Shoot has displayed a modicum of good taste.

THE NEW MOTION PICTURE The Fall (*1/2 out of four) with the most striking title sequence I've seen in quite some time -- it derives its power from a Beethoven composition and Colin Watkinson's evocative cinematography -- and closes with a lovingly crafted tribute to the art of silent cinema and, specifically, to that era's great stuntmen. Unfortunately, everything in between these bookend sequences is a crock.

A remake of a 1981 Bulgarian film named Yo Ho Ho, The Fall finds writer-director Tarsem and his co-authors plundering the likes of The Wizard of Oz and The Princess Bride for this visually sumptuous but emotionally hollow story about an injured stuntman (Lee Pace) who tries to coerce a fellow hospital patient -- a little girl (Romanian newcomer Catinca Untaru) with a broken arm -- into unwittingly helping him commit suicide. He does this by earning her friendship through the telling of a fairy tale that finds a diverse group of warriors (a masked man, an Indian, an African, and so on) teaming up to take down the villainous Governor Odious (Daniel Caltagirone).

Tarsem's first film, the Jennifer Lopez fizzle The Cell, was largely criticized for accomplishing little more than showing off its helmer's music-video background, yet that film looks as narratively complex as Chinatown when compared to this trite offering. Tarsem filmed his epic adventure in well over a dozen countries, generating plenty of Frequent Flyer Miles for himself but offering nothing to audiences hoping for more than just visual extravagance. And while the fantasy yarn is deadening enough, even worse are the scenes involving young Untaru, whose ungainly, nails-on-the-chalkboard performance and difficulty with the English language (subtitles would have been nice) conclusively demonstrate that not all children are natural actors. Making movies isn't child's play, and The Fall proves that in more ways than one.

ONE OF MY cinematic pet peeves (and they are legion) is when a fellow scribe describes a motion picture as pointless. Despite the scarcity of story, or lack of depth among the characters, or general ineptitude on every level, the filmmakers had some sort of vision — some raison d'etre — for making their movie, and that alone means it has some sort of point.

Now here comes The Strangers (* out of four) to test out my long-standing theory and risk turning me into a hypocrite. Is there a point to this anemic thriller in which a young couple (Liv Tyler and Scott Speedman) are terrorized in a secluded vacation home by three masked invaders? Maybe the point is to show how none of us are really safe from the evils of the outside world, even when we're in our own homes. That's a moldy premise that barely needs repeating: For starters, just the past two months alone have seen the theatrical release of Funny Games and the DVD release of the French import Them, both wielding identical plotlines.

Or perhaps writer-director Bryan Bertino's only purpose is to scare the living hell out of audience members, a noble pursuit in this age of fright-free terror tales. But The Strangers isn't scary, just tedious, and the final image shows that Bertino didn't even have the balls to follow the story to its logical ending. His cop-out may not make the movie even more pointless, but it certainly makes it more insulting.