Band stokes the coals for a new release

The musical interplay between Jeremy Davis and his younger sister Maggie Bourdeau lies at the heart of the Charlotte indie quartet Elonzo's increasingly impressive body of work. But when the siblings get into the occasional creative squabble during rehearsals, their fellow band mates just let the pair ride it out.

"You kind of stand back if they're bickering," says bassist Stephen Narron with a chuckle. "They're family, they'll sort that all out." 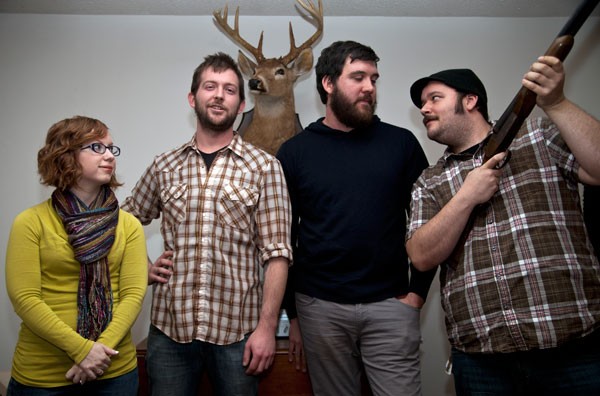 True enough. After all, tumult and tension fuels great rock 'n' roll writing. And when siblings are involved — think the Louvins, the Kinks or Oasis — that fire typically burns a little hotter than usual.

There's plenty of fire in Elonzo's music these days. The urgent and emotional songs on the band's latest album, Salt in the Wound/Flesh on the Bone, were sparked by relationship turmoil suggested in songs titles like "Cannon Fire Desire" and "Graveyard Love." But relationship and sibling issues are just a symptom of something even deeper and more personal for Davis, Elonzo's leader who writes the songs, plays guitar and sings. In these songs, he's addressing the larger dichotomies reflected in the LP's title.

"It's basically just the fight between head versus heart. Not so much 'girl problems,'" Davis says, adding that the big question he had when writing this material was: "How do I get what I want versus what is best? Those are two separate parts of me that are in constant conflict. I think the title came just like everything, organically."

That conflict plays out in the songs the band rehearses on an unseasonably warm December evening, as 30-year-old Davis and his band mates prep in the basement of his two-story home in the Idlewild South neighborhood for a Snug Harbor residency which runs through January.

Between songs and pulls from his PBR, Davis discusses Elonzo's evolution, as he cradles the G&L ASAT Bluesboy guitar he uses to recall the early epic canvases of Band of Horses or more traditional Southern rock riffage. Davis' 25-year-old sister, Bourdeau — whose diminutive stature, sparkling smile and strawberry curls seem the antithesis of her brother's lanky frame, brown hair and serious countenance — sits at a Korg keyboard, filling in anecdotal details when she's not providing organ washes reminiscent of Whiskeytown's Stranger's Almanac or gospel counterpoints to her brother's melodies.

The unexceptional scene in this rehearsal room — musicians in other Charlotte basements are no doubt doing much the same thing — points to the unspectacular ways in which bands evolve, through endless rehearsals and recordings, in an effort to arrive at something noteworthy. In Elonzo's case, that would be Salt in the Wound/Flesh on the Bone, the band's third and most impressive full-length album. The LP's coming out party on Jan. 31 ends the residency, but it also begins a new and potentially breakthrough era in the band's career.

For most of its six-year life, Elonzo has been primarily the vehicle of Davis, who wrote and arranged the songs before bringing the band in to flesh them out. From Elonzo's tentative, self-recorded 2008 debut, All My Life, through the more assured and thematic country rock of 2011's A Letter to a Friend, the band projected promise on a modest scale. But the lush arrangements and soaring melodies on the new record — check the anthemic, cloud-parting love song "Ghost Coast" — show a sharply spiked learning curve; Elonzo has become, in its leader's words, "an actual rock band."

"That's just a result of becoming a better band, playing together and playing a lot," Davis says of the more ambitious and confident sound. In addition to his bandmates' bigger roles, Davis cites the contributions of Satellite Studio's Paul Jensen and John Nipe. The duo helped produce and engineer Salt In the Wound/Flesh On the Bone and provided key accents like mellotron and strings.

Just as importantly, Jensen, who has run sound and engineered locally for decades, has been a mentor to Davis. "He and I have these lengthy email conversations," Davis says, "especially when I'm recording, because I can get pretty neurotic."

Whatever advice Jensen imparts to go with the neuroses Davis is mining for inspiration is working. Back in the basement is a dry-erase board on the wall showing various track sequences, including the one-two punch of the banjo-accented shuffle "Here It Comes" and blues-y "Blinding Reminder." This is how the band kicks off practice, and the songs segue into each other without a hitch. It's an impressive musical catharsis, notable for that guitar-and-keys dynamic soaring above the rhythm.

As the last notes fade into the rafters, nobody says anything. Only glances are exchanged — "Pretty solid," they seem to say — before Elonzo moves on to work the knots out of another song's tempo issues.

Davis and his sister didn't play music together as kids. It wasn't until Davis started churning out songs, after going off to school and interning at an Atlanta studio, that Elonzo began to take shape. Upon his return, he moved into the Rock Hill home of his sister and her husband, Dan Bourdeau, primarily to play music with Dan, who was Elonzo's first drummer. (Dan appears on roughly half of Salt In the Wound's tracks, and only left the band last year after landing a job that keeps him on the road a lot.)

Davis eventually convinced his sister to help flesh out his nascent songs at open mics around town, though they got off to a rough start. When Elonzo's number came up to take the stage at the duo's first open mic, Maggie's nerves got the best of her and Davis played alone. But she bounced back a week later and vanquished her stage fright.

"I don't know why I was so nervous," she says with an I-can-laugh-about-it-now chuckle. "I'd played in a worship band in church since I was 14, in front of people every week."

Crisis averted, brother and sister settled into the sibling dynamic that usually yields clairvoyant understanding and that elusive improvisational music-pocket. And if they do battle occasionally, Salt In the Wound suggests the siblings and their cohorts have found the right place to work out the angst.