When we find ourselves with an oppressive government that limits our freedoms, in large part we've done this to ourselves," Charles LaBorde says. "We've allowed it to happen."

A veteran Charlotte theater director and educator, LaBorde is discussing themes central to his latest production, Fahrenheit 451, a stage adaptation of Ray Bradbury's 1953 novel about a society that has banned and destroyed books. The novel's title refers to the temperature at which book paper burns.

LaBorde is particularly excited to direct the show for Three Bone Theatre, which opens on Nov. 2 at Duke Energy Theater, because Bradbury, who died in 2012, did the stage adaptation himself. The play was first performed in Los Angeles in 1979, but wasn't published until a decade later. Bradbury's cautionary tale has also been adapted as a 1966 film, directed by François Truffaut and starring Oskar Werner and Julie Christie. HBO is currently developing a version of the story starring Michael B. Jordan and Michael Shannon.

In all three versions of the story, books are outlawed because their contents are frequently considered unpleasant, and they often present contradictory opinions and points of view. Most damning of all, books stimulate the imagination, and an active imagination can make someone question their lot in life.

Instead of putting out fires and saving lives, the firemen of Fahrenheit 451's dystopian future are charged with putting volumes of non-fiction, literature and poetry to the torch. It's no accident that LaBorde's production clads this anti-intellectual Gestapo in helmets and body armor that mirror the makeshift uniforms of the alt-right terrorists who have descended on Charlottesville, Virginia, and elsewhere.

The play's plot centers on Guy Montag, a fireman dedicated to his job of burning books — that is, until a strangely alluring young woman named Clarisse entices him to open one of the forbidden volumes and start reading. Then all hell breaks loose in Montag's ordered world. 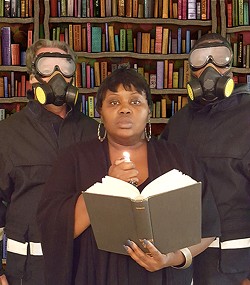 With the Nazi book burnings still a recent memory, the notion of a violent anti-intellectual movement was incendiary when Bradbury's novel hit the bookstands in the 1950s. The concurrent pro-censorship cancer of Senator Joe McCarthy's anti-communist witch-hunt added a sting to the author's tale.

"The play deals with issues of freedom of speech, control of the press or the lack thereof," LaBorde says, noting that the author's reaction to his own work shifted over the years. When the book came out during the McCarthy hysteria, Bradbury said it was a reply to censorship. In later years, the Emmy Award-winning writer claimed that Fahrenheit 451 was a commentary on how television and mass media have supplanted reading and degraded culture.

"When [Bradbury] wrote the novel television was in its infancy," LaBorde says," and when he did the play, it was pervasive."

LaBorde, however, maintains that the theme of surrendering our liberties ourselves, rather than having the government come and steal it from us, is the most important one.

"It's a strong message for us at any time," he adds.

Bradbury's vision of an unimaginative, anti-education America strikes a chord with LaBorde. The 67-year-old actor, director and playwright put his performing career on hold to become a pioneering educator in the Queen City. He launched two of Charlotte-Mecklenburg Schools' most successful magnet institutions, Myers Park High's International Baccalaureate and the Northwest School of the Arts.

LaBorde served as Northwest's principal for 14 years, preparing countless graduates for film and stage careers, before retiring in 2008. Since then, he's been active in Charlotte's theater scene.

Fahrenheit 451 is his second production for Three Bone, having directed The Actress for the company last May. LaBorde acknowledges that casting was a big part of his job as director of the current show

"I've directed a lot of plays in Charlotte since I arrived here in 1976," he says, "so I know the acting pool pretty well."

Given that, LaBorde is surprised that he had previously worked with only three cast members — Harry Jones Jr. who plays fireman Guy Montag; Thom Tonetti, who portrays Fire Chief Beatty, Montag's boss and mentor; and Lisa Hatt, who essays the role of Montag's shallow wife Mildred.

The other performers — Stefani Cronley, who portrays Clarisse, the young women who stirs the spark of rebellion in Montag; Bill Reilly, who plays retired English professor Farber; Angie Cee, who brings to life book hoarder Mrs. Hudson; and ensemble members Alystia Moore, Varun Aggarwal, Christopher Long, and Anna Royal — are performing in a LaBorde production for the first time. 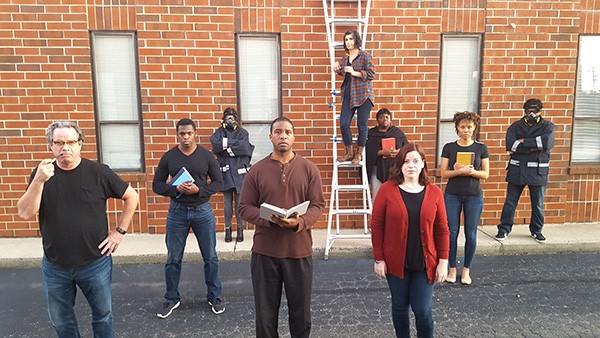 LaBorde counts himself lucky to have landed such an exceptional cast. Jones is an intense actor and expert listener, LaBorde says; a characteristic that is vital for portraying Montag.

"Even though Montag is onstage for the entire show, he doesn't speak much," LaBorde says. "He's confused and reticent, and at times he doesn't dare say what he's thinking."

Much of Montag's journey is conveyed in his reactions rather than dialog, which LaBorde says plays to Jones' strengths as an actor.

Chief Beatty, the villain of the story, is a complex character. "Beatty's also a mentor to Montag, and he stokes the fires of rebellion and resistance in Montag," LaBorde says. Once an avid reader, Beatty invites Montag to his house where he shows him shelves of unopened and rotting books.

"[Thom Tonetti] is a cerebral actor," LaBorde says. "He does a great job of capturing Beatty's wit, humor and sarcasm."

The balance between the two firemen is crucial to show's dramatic tension.

"The show is in many ways a battle of wits and differing philosophies between Montag and Beatty," Laborde says.

He also praises Lisa Hatt, an actress still new to Charlotte audiences, for the humor she brings to the role of Montag's wife Mildred, a woman drugged into happy submission by a barrage of mind-numbing media.

"She's a superb comic actress, and her resume is almost all musicals and musical comedy," LaBorde says. "We're using her in a totally new way. She'll make a big impact [on Charlotte audiences]."

Stefani Cronley, as Clarisse, has done a great job of capturing the naiveté and youthful inquisitive mind of the character, LaBorde enthuses. Her relationship with Montag is crucial, because she finds the chink in the fireman's authoritarian armor and shines the light of knowledge into his oppressive world.

The biggest challenge LaBorde faces with his cast is its relatively small size.

At the end of Fahrenheit 451, Montag escapes civilization and flees to the woods There he joins the book people, an outlaw group whose members memorize great works of literature before consigning their books to the flames. That way, mankind's knowledge, art and poetry can be passed down orally to future generations until justice and sanity return.

"That could be confusing to the audience," LaBorde says, "because the same actors they've seen all night are also playing these book people out in the woods."

But LaBorde thinks it will work. The approach encourages the audience to use a little imagination, and that ties in neatly with many of the play's themes.

LaBorde says he thinks that much of the play's impact relies on its depiction of future technology, and he plans to emphasize tech heavily in the production.

The most terrifying manifestation of innovation run amok is the mechanical hound, a kind of watchdog for Bradbury's oppressive society; it's a combination of blood hound and hit man fashioned from machinery, copper wire and storage batteries. "It represents technology that we have created that then turns on us," LaBorde says. "In the show, Montag and Beatty develop the hound, and it is eventually used as a weapon against them."

LaBorde has decided to never show the hound onstage. Instead, lights and sound effects will suggest the presence of the eight-legged monster.

Ironically, depicting the rest of the technology of Bradbury's illiterate dystopia will require very little suspension of disbelief. Originally LaBorde planned to pantomime most of the high tech, but he opted instead to use the technology that's already readily available.

"Almost all of the functions that are depicted in the play, with television and communication, are done on smart phones," he says.

"So the smart phone is all-pervasive in the world of the play," LaBorde adds.

"It's not too far from where we are now."