(Through the Goalposts of Art)

After nine seasons of guiding his theater company to acclaim and respectability, artistic director Jim Yost says BareBones is ready to embrace steroids. With their most recent production of Torches at the Sunset Grill -- and with their upcoming production of Orange Flower Water -- BareBones is shaking things up, flexing some muscle and tossing off a few fancy moves.

For the first time, Charlotte's most distinguished living guerilla theater is moving downtown to Duke Power Theatre in Spirit Square. They're paying their actors, another precedent. Brashly, they're offering a money-back guarantee to all former Charlotte Rep subscribers. And they're showcasing former Indianapolis Colts placekicker Dean Biasucci, making his Charlotte debut in one of the lead roles.

Moving away from the fringe actually made it possible for Yost and BareBones producer Anne Lambert to seriously contemplate paying actors. Faced with a rent hike at their old haunt on Rampart Street, flamboyantly named the SouthEnd Performing Arts Center, BareBones embarked on the kind of soul-searching that can result from financial scrutiny.

"We're a $65,000-a-year company," Yost explains. "We realized this only when we actually hired an accountant to figure this out! One of the things we looked at was, if it costs this much money to produce and 40 percent of that is space each month, we can take that money and reallocate it into paying our artists. We've always paid our designers, we've always paid our directors -- since we've been in the SPAC."

The Duke doesn't come cheap, but it won't be a monthly drain of $2,000 from BBTG coffers. One of the reasons that the company was able to make SPAC work was its ability to sublet the refurbished space to other companies.

Income from those companies stopped coming in, making the SPAC arithmetic-unfeasible.

Not having their own space means BBTG had to negotiate a comfy deal with the PAC for their rental at Spirit Square. As they rehearse in the Duke, they're on the clock, no longer free to pour sweat into their sets until 2am.

But they're also better positioned to attract an audience, particularly in the downtown void left by Rep's demise. It's an angle that Lambert, a former development director at Charlotte Rep, couldn't resist.

Rep and Actor's Theatre both called Duke home during their formative years. Rep made the leap from summer to year-round scheduling there, while Actor's was still incubating upstairs in a studio space long since converted into a classroom. Lambert herself has helped prove the enduring viability of the Duke, producing the City Stage fringe theater festival there for the past two summers.

"So I know it's an investment," says Lambert, acknowledging the risk, "but I really think it will pay off, because I think audiences will find us. We just wanted to say to the Rep folks, give us a try. We don't want there to be any barrier to checking it out. I'll tell you, I think this is some of the best acting you're going to see this year."

Along with the money-back challenge to former Rep subscribers, Biasucci's presence is a nice PR powder horn to be firing off.

As it turns out, the veteran of 11 NFL seasons is no acting novice. While attracting the notice of pro scouts on the gridiron at Western Carolina, Biasucci was a theater major. During his first three off-seasons, he landed roles at Indiana Rep, an Equity company, in some heavy-duty dramas, including Julius Caesar and Six Characters in Search of an Author. After that, he summered in New York for three years studying acting.

After hanging 'em up, Biasucci was fairly successful in LA for the next 10 years, landing roles in Jerry Maguire, ER and The West Wing. But the grind of constantly looking for new acting gigs grew old. Back to Carolina he came, where he had already begun investing in real estate. After settling his family, Biasucci felt the urge to get involved in the local theater scene.

Yes, he realizes that there's a PR whirlwind swirling around him as BareBones fights for survival, but Biasucci is unfazed. Focused on the basics.

"There was some pressure when I came in to kick a 40-yarder to win or lose a game," he admits, "but I'm not really feeling any pressure about acting. The only reason I do theater is because I like doing it. Nobody is forcing me to be here, you know? They don't call it a 'workbill,' they call it a playbill. I'm here because I like to play." 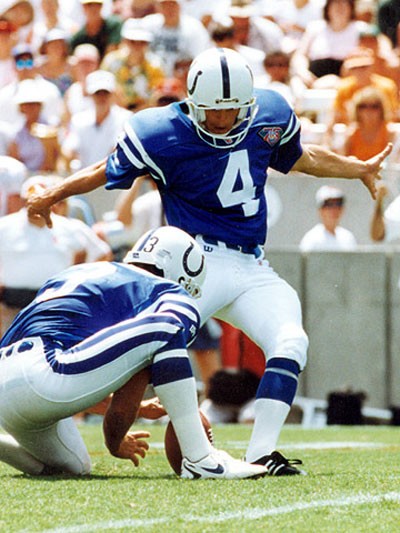 Also in the lineup is playwright Craig Wright, who has garnered more attention since Yost noticed Orange Flower Water among a group of plays anthologized in the best of 2002. Now Wright's better known for his work on HBO's Six Feet Under.

Like Yost, Biasucci was impressed with Wright's taut drama before he learned about the playwright's Emmy nomination. At the vortex of this intense, real-time unraveling of two marriages, Biasucci is Brad.

"He's got a lot of anger," Biasucci reveals. "I think he's an honest guy. He's different from the other characters in the play. This guy could give a shit about what people think, and I like that. There's some positive qualities in this character, and he's tremendously flawed, and he'll be fun to play."

Count Kim Robards as another artist coming back home to Charlotte after decades of establishing herself in another time zone. Kim Robards Dance is doing more than completing a three-week residency at CPCC this week, climaxed with public performances at Halton Theater on Friday and Saturday.

Robards is setting the stage for creating a permanent second home for her company, based in Denver since 1987. She and her 11-member troupe will be back this summer for a two-week residency in late July.

But after involving some Charlotte talent in Kim Gym Megalomania, specially reconfigured for the Halton performances, she'll be spiriting away three of our most prominent dancers to Denver: Sarah Emery and Bridget Morris from Moving Poets, and Audrey Ipapo from Queen City Jazz Company.

That's a lot of commuting back and forth from the Mile High City.

"They're coming out to Denver to dance with us in our final performance there in June," Robards acknowledges. "So obviously, we're going to need an airline sponsor!"

We can be thankful for a monumental musical work that flies us around the universe and drops us off at that sunlit spot where mankind and womankind are innocent, amazed and enfolded in the first human love there ever was. Yes, it was refreshing to see the mighty Oratorio Singers of Charlotte leading the charge for Haydn's The Creation in its debut at Belk Theater last week. Charlotte Symphony hadn't performed it anywhere in nearly 25 years.

The yearning to return to Adamic innocence and make a fresh start as stewards of the Earth surely reached its zenith in the upswell of American romanticism voiced by Thoreau and Whitman. By contrast, Haydn's evocations of creation and paradise are thoroughly classical: God brings light to the universal darkness and imposes order upon chaos in a virtuosic burst of plenitude. Our superiority over all other life forms is quaintly axiomatic -- like Adam's dominion over Eve. We're all eternally God's blessed gardeners if we remember our place in the grand scheme of things.

Wielding the baton, maestro Christof Perick kept the hierarchies in pleasing balance, pruning his orchestral forces so that the Oreos' salvos -- representing the heavenly host -- prevailed over the instrumental music. Wafting over the orchestra, the richly textured choral pronouncements were the very breath of God in the narrative. Or the angels singing his hallelujahs at the end of each momentous Day. Nothing encouraged us more irresistibly to regress to our own childhood innocence as we reexperienced the birth of the world.

Perick's parsimony in double-casting the bass and soprano roles, however, turned out to be hit-and-miss. Guido Jentjens and Ute Selbig as Adam and Eve were as delightful as the bright stars and murmuring streams they extolled. Neither was quite as relaxed earlier in the story when Jentjens was the angel Raphael and Selbig was Gabriel. Selbig's tension was easier to understand, since Gabe's tessitura now lies above her reach.

As Uriel, tenor Tilman Lichdi made an auspicious US debut that Perick is likely to be proud of decades from now. The voice is velvet, and his effortless range and sure intonation were upstaged only by his lively, earnest expressiveness. Too bad we didn't get more of him.