Drinking and Driving: A Night at Topgolf

At 32 years old, Craig Kessler looks more like the average millennial golf fan checking out Charlotte's newest golf and entertainment center, Topgolf, than the COO of the company's U.S. operations.

Sitting in a Topgolf suite on Monday night, August 7, he glimpses around while eating prime rib made by the on-site executive chef. "The community has totally embraced this," he says. "Tonight is a Monday night, and we're on a four-hour wait because the community is so fired up about this business." 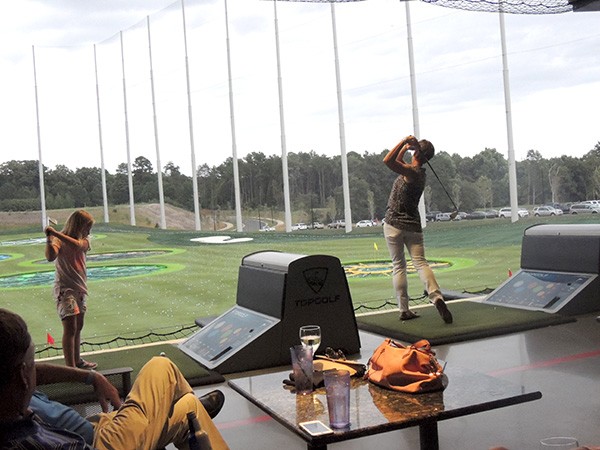 It was to be expected that Topgolf, best described as a driving range 2.0, would be packed on Monday, the first night of the first PGA Championship week ever to be hosted in Charlotte. But it's been consistently hard to get a spot on the range at Topgolf since it opened in June.

That's because it's golf, but without all the smug.

The main feature at Topgolf is a driving range that's been souped up to resemble something that 10 years ago could only be played on Tiger Woods PGA Tour video games. Each flag on the range is surrounded by a target that drops into the ground beneath, and a sensor in each ball tells computers exactly where it landed and who hit it, which instantly translates back to a screen to show the player how they've scored, depending on which of the multiple mini games they're playing.

Add to that the live DJ playing every Friday and Saturday night and a local beer menu, and you've got an impressive experience, even for folks who aren't that into golf.

"We offer a product that doesn't really exist anywhere else," Kessler says. "We're creating an experience that's centered around golf, but the experience is really about food and beverage, live music and people coming together to have a good time."