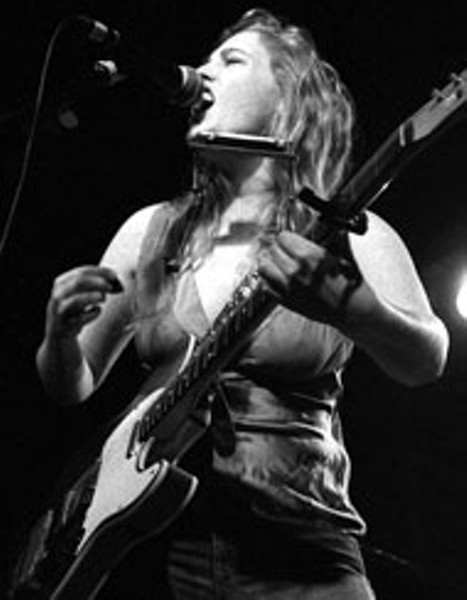 Radok MERRITT BADGE Tift and Co. reign at the Visulite
To paraphrase Jean Cocteau, "Without opposition, there is nothing." Without some sort of sharp rock to rub against, we never shed our skin, never truly begin anew (all of which might seem a strange way to begin to describe the White Stripes' recent show last Tuesday at the Grady Cole Center, but bear with me).

By now, you probably know of the Stripes. Man/woman duo. Jack and Meg. Once husband and wife, say the magazines. Brother and sister, say the band. Fond of red and white. Wear it all the time. Made some critics believe in rock again, and gave the rest of the world a decent reason to actually turn on 106.5.

It makes Jack White this generation's Jimmy Page. Meg? It makes her "Our Meg," keeping the beat patiently while her brother/father/sister/husband wails away.

It makes rock -- hell, art -- have a little mystery again, something that we could stand to have a hell of a lot more of.

It probably doesn't make the bass players of the world too happy, but that's what they get for all the Geddy Lees and Stings and Gene Simmonses they've given us over the years. Next stop: drummers!

One thing I've noticed recently: It's been raining like holy hell (very observant, I know). Interestingly, however, I've also noticed that people have been filing in two-by-two to good local rock shows, showing up in large numbers to support worthy acts like Tift Merritt, who appeared at the Visulite Theatre on Friday.What does this say? Are we -- the patient and talented and supportive children of Queen Charlotte -- becoming the new Seattle? Should we prepare for the cameras and the major labels and all the cheap heroin we can get our hands on?

Not likely. Sometimes, a deluge is just a deluge. Unless, of course, this is all part of some grand biblical scam to kill all us North Carolinians off with a plague of rain-spawned, West Nile Virus-carrying mosquitoes.

Take Friday's Les Dirt Clods show at the Double Door Inn, for example. I walked in... er, paid the, um, entrance fee, and stood at the side of the stage, my favorite place to see a show at the venerable old haunt. One of the openers, Nicole Atkins, finishes a nice set with a rollicking Rod Stewart cover. Folks head to the bar, and soon, someone says, "Letmebuyyouadrinkhhth." "Why the hell not," I think. "I've never written about this person before, and I'm certainly not so shallow or loose with my journalistic ethics that a drink would sway me to give "thumbs up' to something I thought was crap." Les Dirt Clods hit the stage, and immediately lock into a groove that makes me think they're about the best live band we have going. "Letmebuyyouadrinkhhth." "Jeez, I dunno if I should." "But you've gotth a designattthed driverth." I couldn't argue, and soon, another holy diver hits my stomach.

By this time, the Clods are wrapping up their show, and I'd be happy if I never saw anyone I knew once, much less the two times that our National Prozac has me seeing.

Designated drivers? Always a great idea -- a must, in fact. But what about designated walkers?