Dredd: Strong arm of the law 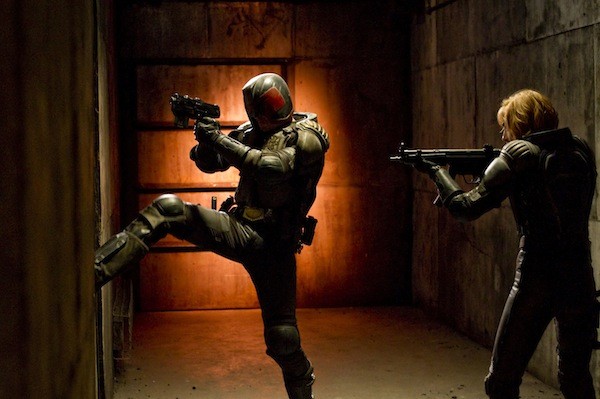 Fans of the long-running British comic strip showcasing the character of Judge Dredd were horrified when Sylvester Stallone managed to turn the declarative statement "I am the law!" into a hammy punchline in the 1995 camp version. Those same folks will now be delighted to learn that Karl Urban has reclaimed the snatch of dialogue for them: When the character utters it in the new adaptation, it's grim enough to give viewers — and villains — pause.

A straight-up action film with little on its mind besides murder and mayhem, Dredd — or Dredd 3D, depending on the auditorium — is stylish enough to entertain more than just the hardcore-gore crowd. Director Pete Travis, who seemed unable to keep up with the dizzying plot twists sprung by scripter Barry Levy for his 2008 thriller Vantage Point, functions better with the relatively straightforward script provided here by Alex Garland; this freedom allows him to construct a movie defined by its beautifully framed mise en scenes and driven by two protagonists who manage to play off each other's differences. Dredd, the futuristic lawman who's sanctioned to serve as judge, jury and executioner whenever the need arises, is tough and taciturn, a direct counterpoint to the tentative and empathic rookie (Olivia Thirlby) he's assigned to supervise. But when they find themselves trapped in a high-rise overseen by a vicious drug lord (Game of Thrones' Lena Headey), he discovers that she can more than hold her own.

It's poor timing that this is being released after The Raid: Redemption (though both were filmed at roughly the same time), since that offers the exact same premise with a higher rate of return — specifically, the hand-to-hand combats fueling that film are more exciting than the gunplay in Dredd. Then again, this picture (unlike Raid) can be viewed in 3-D, and for those opting to go that overpriced route, it should be noted that the movie looks terrific in that format. When a bullet lovingly rips through a thug's face in slow motion, audience members in the side seats might feel an inclination to duck.