Dracula has risen from the stage 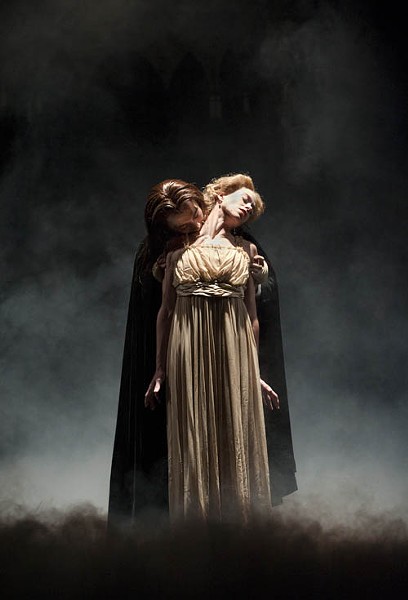 When North Carolina Dance Theatre was still a relative newcomer in Charlotte, a renegade outfit known as Moving Poets Theatre of Dance invaded the cool catacombs of cobwebbed Carolina Theatre with a new piece sporting an old name, Dracula. In a sparse field of Queen City saturnalia, the Drac choreographed by (and starring) Till Schmidt-Rimpler struck a nerve, instantly establishing Moving Poets at the vanguard of innovative arts groups and shining a beacon on Halloween as a season ripe for creepy, macabre, and monstrous exploitation.

Now with Moving Poets long gone and their last 2004 revival of Dracula a distant memory, the time is ripe for NCDT to start a new Transylvanian tradition. Of course, the Carolina Theatre was a state-of-decay venue when Dracula first came there, uniquely hospitable to spooks, while the Knight Theater, where the Mark Godden version of The Count runs through Sunday, is state-of-the-art, customized for its resident dance company.

If that sounds like this Dracula might be too slick or glitzy for comfort, guess again. Godden's choreography is more linear than Schmidt-Rimpler's, offering us more of Bram Stoker's original saga, but it's also among the edgiest full-length works NCDT has ever presented. Godden's dance distillation flip-flops the book, not taking us to Transylvania until deep into Act 2.

We began in gloomy England, with Traci Gilchrest as the sensuous, slightly wanton Lucy Westenra, already in the thrall of the evil, bloodthirsty Count, portrayed dashingly (with a lurid flowing cape) by Dustin Layton. Surrounded by a quartet of bustling maids, three courtly young men, and the commanding Justin VanWeest as Dr. Van Helsing, Gilchrest shuttles between pathos, coquettishness, narcolepsy, and rabid viciousness as the devil in her blood has its way with her. If you've ever longed for Gilchrest to be a little less serenely perfect, your wish has been lavishly granted.

Watching VanWeest switch from Western medicine to garlic and wolfsbane is a little like watching the conjurations of Drosselmeyer in The Nutcracker, and the war over Lucy's body and soul is amplified by repeated invasions of four lizard-like gargoyles — giving the lie to Count Dracula's suave exterior. While I suspect that we'll be seeing more scenery from designer Paul Daigle in future visitations of this production, his stunning array of costumes reaches us in full flower, fresh from the most recent Dracula revival by the Royal Winnipeg Ballet, where the piece has long since insinuated itself into October.

I also suspect that Godden may have been disheartened by Charlotte's reception of the most grisly special effects. The Knight Theater crowd actually laughed on opening night when Act 1 culminated with Lucy's decapitation. My wife Sue's suggestion that Lucy and her decapitated head ought to have the same hair-do might be helpful.

Except for the Pantomime frolic after intermission, the symphonic music of Gustav Mahler adds constant heft and Wagnerian gravity to the unfolding story. Sasha Janes and Alessandra Ball took over as the romantic leads, Jonathan Harker and Mina Murray, when we arrived at a Budapest convent and Mina perused Harker's diary, intrigued by the Transylvanian horrors he had narrowly escaped.

The showdown between Van Helsing and the Count, with golden stakes, crucifixes, and the dawn's early light, was rather thrilling — all the fog machine effects perfectly thickening the atmosphere. Basic alterations at this week's performances affect only the casting: Layton and Janes trade roles as Dracula and Harker, Kara Wilkes takes over for Gilchrest as Lucy, and Anna Gerberich replaces Ball as Mina.