Before the sadistic clown became a mainstay of our collective nightmares, there was the creepy carnival. Where do you think those evil bastards came from anyway? Sure, your average circus is wholesome, even corny, fun in the midday sun, but switch off the lights and the fairground turns eerie with the rising of the moon, a twisted warren of sideshow geeks, freaks, mummified monstrosities and grinning malevolent carnies.

Charlotte six-piece Dr. Cirkustien has tapped into this fun and fearful spook show milieu for six years with creepy-cool music and a frequently elaborate and sinister stage show. CL talked with 37-year-old Cirkustien ringleader Kenneth Winchester (AKA Kendo Winstar) about taking audiences on an uncanny and wild ride. 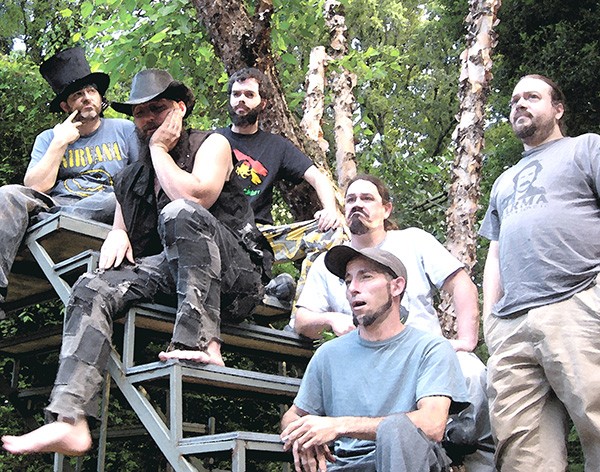 Kendo Winstar: Cirkus-STEEN, Cirkus-STINE, it doesn't matter. It's like a mandala. What you see is what it is.

Who is in the band and what do they play?

Jerry Lowery is our drummer. Jason Renegar is our singer. Bob Todd is our guitar player. Beau Carter is our trumpet player. I'm the keyboard player. John Johnson is our bass player.

A Creative Loafing blurb from 2012 says you mix "Nick Cave ranting with Italian (horror movie) synths" and that you "crossbreed zombie ska with free noise." Why did you take such an eclectic route?

There were three of us originally and we all liked different stuff, and we just put it all together. Over time we developed our style. The whole band is all over the place.

I'm into everything from The Specials to Deep Purple to Bach to Wu Tang Clan. The guitar player is heavily into metal. Our drummer likes jazz and Steely Dan. The singer is into Tom Waits.

Can you describe a typical Dr. Cirkustien show?

We've had everything from burlesque dancers to fire performers to whatever was available at the time. We usually stick to the circus theme, the vaudevillian look and feel.

What drew you to that?

The music went there, and it grew by itself. Our singer wanted to start a jazz poetry project, and I signed up for it. I was going to play drums at the start, but the bass player turned out to be a better drummer, so I gravitated to the keys.

The sound we created reminded us of a circus – the mixture of first and second wave ska mixed in with rock and jazz. The keyboard sound also contributes to that carnival feel.

Why does the circus theme go over so well with the audience?

It doesn't resonate with everyone, but when it does, people really like it. I think the sound and the look draws them into a feeling that they had when they were kids at the circus, or maybe when they were a little older – the crazy celebration, the drunkenness of the carnival.

You come from different types of music and have different tastes. How does that work out when you're figuring out what to play?

A lot of times it works itself out, and sometimes it doesn't. We have lots of hits and misses. There are not too many bands that would pull in some of the stuff we do, or figure out a way to lace them together like we do.

Who knew that you could do a mix of ska and progressive metal? It just happens naturally, and sometimes it doesn't. We have to pick which (songs) we want to put fertilizer on, so to speak.

Who writes the band's lyrics?

Jason (Renegar) writes most of the lyrics. He has a plethora of ideas, and he's good at stitching stuff together. A lot of times the music is so happy and energetic, you don't realize that the lyrics are pretty dark. That comes from Jason. He's able to put on a smile and say these disturbing things. I think that how we get away with some of the songs we do.

You have six people, all into different types of music. What's the secret of keeping all you guys together?

People in Charlotte start a band, and a year later they're done. They record one album. They do one show a month, and then they hang it up. I really have no idea how we've been together as long as we have – other than just showing up on Thursday. That's the rule. You have to be here every week for practice.

Do you tour outside of Charlotte?

We haven't in the last year and a half. We used to tour regionally. We'd do circles through North and South Carolina to the beach and back, but we haven't much as of late. Once you add more members, you add more schedules to deal with.

There are six people. For everyone to take a week off, it all has to work out perfectly. All the planets have to align. We're looking into doing more touring in the future after we record something with all of us on it, because we have no recordings with the horn player. Once we do that, and have something to sell, we'll be able to fund a tour a little better.

When you play The Milestone on June 17, will you be in circus costumes?

Sometimes when we're playing smaller shows we don't get into costumes. Once we started adding more members, some of them didn't do costumes but some of them do.

We did a show a few weeks ago where we all dressed up as Cobra Commander soldiers (Terrorist villains from the from the G.I. Joe: A Real American Hero toyline). It's always a surprise. Who knows what's going to happen? You'll just have to come and see us.