Down to earth: Today the Moon, Tomorrow the Sun

People-watching inside Walmart at 3 a.m. is an experience second to none. Stragglers looking to satisfy late-night munchies after a night of partying, half-asleep husbands trying to pacify a pregnant wife's cravings and perhaps a random out-of-town band member or two. For Atlanta electro-pop/rock quartet Today the Moon, Tomorrow the Sun, Walmarts have become a kind of second home on the road.

"It's not so much that we support Walmart as a corporation, but they'll let you park there overnight, they have bathrooms and are open 24 hours," bassist Micah Silverman says. "If you need a diet Coke in the middle of the night, you can walk right in. There's also one like every 20 miles, so there's always a place to stop and get some sleep." 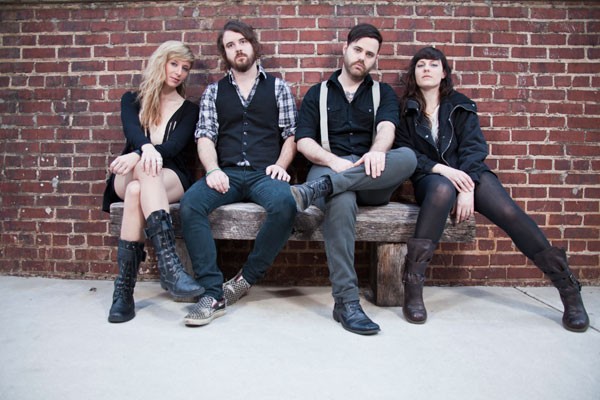 Today the Moon is set to hit the road this week — stopping at Snug Harbor (and perhaps a local Walmart) on Aug. 10 — for one more brief run supporting its full-length debut, Wildfire, before shutting down touring to focus on the band's next album.

Alongside Silverman are Cregg Gibson (guitar), his wife Lauren (vocals/keyboards) and drummer Jeremy Cole. The band's danceable yet hard-edged music has electronic aspects while bringing forth plenty of rock energy for a Metric-meets-Paramore back-alley sonic fistfight.

"We've been on the road for so long and been pushing this album for so long that we need to focus on being creative," Silverman says. "We've missed that about each other. We've felt that we toured everywhere we wanted to regionally and instead of doing the same thing over and over, we want to switch it up a little bit."

The band will set its sights on writing and recording in addition to working on videos and a new stage show. While on the road, there's no time for writing new songs as the quartet's focus is on the business aspects of booking and performing and, of course, traveling.

"When we get home from a tour, it takes so long to transition back to normal hours so that we can work jobs to pay the bills at home and support going back on the road," Silverman says. She and Cole work in marketing for Zipcar while Lauren and Cregg are hair stylists who are able to schedule appointments for when they're off the road.

"I think this break is definitely a recharge time for us," Silverman says. "The road is taxing physically, mentally and emotionally. I'm not complaining though — there are a million great things about being on tour." They've played in Charlotte a handful of times, making friends with local acts such as Junior Astronomers, Sugar Glyder and My Captain and a steadily growing Queen City fan base.

Today the Moon, which formed in Atlanta in 2007, has been touring in the region regularly since 2009. Wildfire came out in early 2011 independently and was then re-released in the fall on Greyday Records.

The songs have a far stronger kinetic drive live than on the album, as Cregg makes use of expansive guitar pedals to create new sounds and Cole uses drum triggers and effects to bring in a booming backdrop.

Silverman says the band hopes to create more of that on the new album and will take its time crafting it to avoid any pressure in the process. They've already spent countless hours talking about what they want the new album to sound like, with plans for the use of string accompaniment and more diversity within the electro-rock soundscapes they've already presented.

"I think the general consensus is to create something that's more epic than anything we've done before," Silverman says. "We want to explore the spaces and dynamics that we've created — instead of having us all play at once. We'll still have our dirty rock sound, but we also want some quiet and intricate songs. We want to have a more mature approach and dive a little deeper."