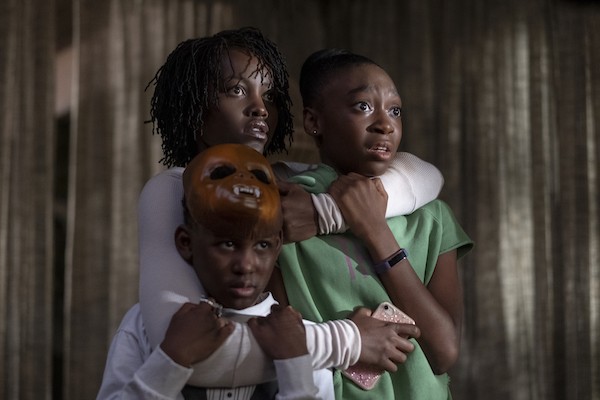 Jordan Peele’s Us (*** out of four stars), the writer-director’s first effort since the Oscar-winning Get Out rocked the nation two years ago, begins with a TV ad plugging 1986’s Hands Across America, a charity event that found over six million citizens and celebrities (among them Robin Williams, Michael J. Fox, then-Governor Bill Clinton, and Chewbacca) linking palms and forming human chains in an effort to raise funds to combat homelessness. Given the theme of Us, another commercial from the period that could work would have been the one for Wrigley’s Doublemint Gum that featured various sets of twins … although the lyrics of “double your pleasure, double your fun” might have given pause to the terrorized protagonists of Peele’s heady, harrowing but ultimately overreaching horror yarn.

Certainly, the Hands Across America promo plays into the picture’s DNA, though that’s hardly a spoiler: Anyone who saw Get Out already knows that small details perpetually inform Peele’s narrative sensibilities. So that Michael Jackson/Thriller T-shirt? That Jeremiah 11:11 passage? And that boat with a motor that’s so Looney Tunes in its unpredictability that it might as well have been manufactured by the Acme Corporation? Yes, yes, and yes.

When the picture commences way back in ’86, Adelaide is just a little girl (played by Madison Curry), one who’s taken to a seaside boardwalk teeming with games and rides. Adelaide wanders off on her own and enters a spooky funhouse of mirrors, wherein she sees herself as a sinister-looking child. But this isn’t merely a mirror distortion — it’s a flesh-and-blood doppelganger, one so frightening that Adelaide bolts from the joint. Cut to the present and Adelaide (Lupita Nyong’o) is now happily married to the garrulous Gabe Wilson (Winston Duke) and the proud mother of Zora (Shahadi Wright Joseph) and Jason (Evan Alex). But an ill-advised trip back to that same beach unleashes a horror that follows the Wilsons back to their vacation home. Standing outside in the driveway, deep in the darkness of night, are four figures who eventually break into the house. And the four are exact duplicates of the Wilsons (and portrayed by the same four actors), although only the Adelaide clone, Red, has the gift of gab, as the other three can only communicate via moans, shouts and howls.

To reveal more risks ruining the ultimate direction the movie takes, but suffice to say that Peele maintains an unnerving ambience for at least the film’s first hour. After that, the film allows too much of a jokey demeanor to siphon away some of the tension — this is partly due to the performances of Elisabeth Moss and Tim Heidecker as the Wilsons’ fun-loving friends. In their defense, the pair are fine in their earlier scenes and are obviously directed by Peele in the latter passages to go overboard in their emoting, but it nevertheless breaks the moody spell the film has maintained until this point (on the plus side, this midsection does include a great gag involving a notorious N.W.A. song).

Fortunately, the movie recovers and Peele again pours on the suspense, although it’s at this point where the plot specifics start to come into focus and Peele is revealed to have attempted to juggle too many eggs. To be sure, there’s enough thematic material here to power an entire semester of college dissertations: the notion that we’re our own worst enemies; the idea that you never really know other people; this nation’s pronounced struggles with xenophobia; the invisible status of those deemed disposable to our society; and so on and so forth. But Peele is never able to integrate the sociopolitical horrors with the cinematic horrors as brilliantly as he did in Get Out — consequently, the more fantastical aspects of Us require a lot of hard swallowing and ultimately generate more questions than answers. As for the big twist, it’s likely to floor many a viewer, but, honestly, it struck me as rather obvious — then again, maybe that’s because I’ve sat through so many ham-fisted M. Night Shyamalan movies and found this twist to be almost on that grasping “gotcha” level (even if Peele does add more subtext to his reveal than Shyamalan ever did).

The performances by the four principals are exceptional, considering they’re all required to provide both “good” and “bad” interpretations to the same characters — Jekyll and Hyde, as it were. But it’s Nyong’o who truly excels in Us. Already an Oscar winner for her superb turn in 12 Years a Slave, she’s phenomenal here as well, bringing a damaged yet ultimately resilient quality to Adelaide and somehow flipping her internal switch to transform into the ravenous and razor-voiced Red. Even when Peele occasionally allows his reach to exceed his grasp, Nyong’o maintains a tight grip on the proceedings.