The Taming of the Trump

It starts off like a bad joke," Donna Scott says. "A conservative lobbyist and a liberal blogger get locked in a hotel room by a beauty queen."

Scott, founder and director of Donna Scott Productions, is revealing a tantalizing teaser of her theater company's free reading of playwright Lauren Gunderson's The Taming on Friday, Jan. 20 at Charlotte Art League. In Gunderson's savvy satire (very) loosely based on William Shakespeare's The Taming of the Shrew, beauty queen Katherine will only free the squabbling politicos when they reach a compromise to make America a more perfect union. Along the way, the all-female cast also plays our founding fathers in a flashback to the Constitutional Convention of 1787.

"It's the perfect show because it makes fun of how ridiculous politics has become," says Scott. "There is a lot of bickering back and forth between the conservative and the liberal. They take shots at each other left and right. It's equal opportunity satire, which is why it is so funny."

We caught up with Scott to discuss politics, theater, empowering women and the state of feminism as Donald Trump prepares to enter the oval office.

Creative Loafing: You're staging a reading of playwright Lauren Gunderson's The Taming, after giving it a full production last year. This reading will be the original cast including you, and it's on Inauguration Day. What makes The Taming a good fit for that day? 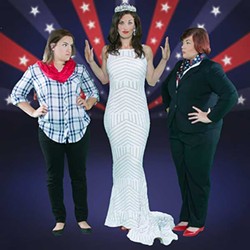 Donna Scott: In the play, Katherine has brought the liberal blogger and conservative lobbyist together because she wants to change the constitution. One of the things we loved about this play when we first read it in August 2015 is that it takes the trope of the beauty queen, and turns it on its head. Katherine is by far the smartest woman in the room.

Lauren Gunderson is one of our boldest, funniest voices in theater today. She was the most produced living playwright of 2015. When we read The Taming two years ago we thought the show would be perfect for the election year. We had no idea when we picked it how topical it would become. There's an entire section on reforming the Electoral College. It makes Lauren Gunderson seem quite prophetic, because she was writing this show in 2013.

How effective is a feminist satire in the age of Trump?

We're all going to see, aren't we? For a lot of us, it means that we're going to be stronger than we ever thought we would be. We're going to speak more boldly about supporting women and being feminists. We're in a situation where I feel other women need support. Women need a community now more than ever. What that means is that we talk about issues that effect women. Anyone who looks at our body of work through the years can tell that we're committed to that. We're always picking shows that have strong women at the core, and have a majority of women in the show. That's a part of our mission at Donna Scott productions.

Another thing we started doing last year is our Women Entrepreneurs In Business And Arts speaker series where we highlight women in Charlotte that are doing great things. They're entrepreneurs and authors making bold strides in business. We have a wonderful partner in the Charlotte Art League, who allow us to use their space to host this series where women talk about the things that have helped them in their business life. That is a huge part of what we're doing, and it feels right on target with everything that's happened since the election.

Who gets tamed in this version of The Taming?

The character I play is the conservative supporter. What she learns is that you shouldn't blindly accept the party line. You should pay attention not just to what politicians say, but also to what they're doing. It's a key concept in the play. Both of the characters, the liberal and the conservative, have their party lines. They say their slogans over and over again, but they finally reach a point where they actually listen to each other.

Is it possible to reach across the divide? The play seems to be saying, "yes."

We have to hope that it is possible, right? I don't want to give up and think that we're at the point where no one can talk to anyone anymore. I like to think that through the laughter and the absurdity depicted in this play people can see both sides. No matter what side of the coin you're on, it's very easy to surround yourself with people who think the way you do. It's important to listen, keep your mind open, and do your own research.