Does Charlotte have a gayborhood?

And why we may not even need one 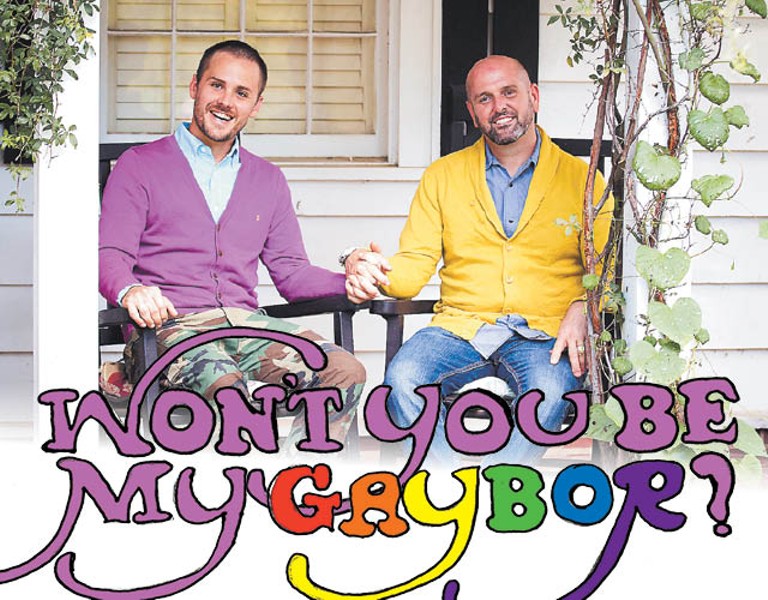 Tom Warshauer has called Charlotte home for 23 years, moving here in his early 30s to take a job with the city. He has lived in some of the city's hippest neighborhoods, including Dilworth, Uptown and, now, Plaza Midwood. He's seen each area transform and their popularity ebb and flow — especially among his gay friends and acquaintances.

But he doesn't think the city has a true "gayborhood."

San Francisco has Castro, and New York has Greenwich Village, Chelsea and Hell's Kitchen. D.C. has Dupont Circle. Chicago, Boystown. These gayborhoods, many of which formed decades ago, contain heavy concentrations of lesbian, gay, bisexual and transgender (LGBT) residents and clusters of gay-owned-and-operated businesses, bars, restaurants and shops. They've become famous worldwide as true gay villages — cities within cities where LGBT people comprise the majority of residents and business owners and rainbow flags are hung even outside non-gay-owned businesses.

Warshauer works for the city's Neighborhood and Business Services, where he helps manage programs to improve neighborhoods. Despite his bulk of neighborhood-building experience and wisdom, Warshauer admits it is no easy task pinpointing an area in Charlotte that is clearly defined as LGBT.

"I don't think there is a Chelsea or Castro in Charlotte," he says. "But there are neighborhoods that have a diverse population and higher percentage of gay residents."

The federal people counters began collecting information on same-sex couples in 2000. The result was a revealing glimpse into a community the government had never thought to track before. Charlotte's 28205 ZIP code — which includes much of Plaza Midwood, NoDa, Chantilly, Belmont and Windsor Park, among dozens of other neighborhoods — had the highest number of same-sex couples than any other ZIP in the state.

From 2005-2009, the Census Bureau's American Community Survey again tracked same-sex households across the country. Only couples were counted, but east Charlotte's Central Avenue corridor was still the gayest of them all in North Carolina; 250 couples, or about 11 percent of total estimated same-sex households in Mecklenburg County, called the area home.

Other, more surprising areas of town were nearly as popular. The South Boulevard Corridor, with the more suburban-like neighborhoods of Madison Park, Ashbrook and Sedgefield, ranked second at about 8 percent. Steele Creek contained 7 percent, and the more conservative Ballantyne and Providence had 7 percent.

Realtor Scott Lindsley of Janus Real Estate says though many of his LGBT clients purchase lake homes and live in the suburbs, they return to the city's core neighborhoods for fun. Plaza Midwood, South End and NoDa offer straight, gay-friendly bars as well as gay bars within walking or close driving distance. Those areas also have small clusters of gay-owned businesses, including restaurants, spas and furniture stores. Plaza Midwood and other areas in 28205 are also home to most of the city's LGBT organizations with physical locations, including the LGBT Community Center of Charlotte in NoDa, Time Out Youth Center in Plaza Midwood and three predominately LGBT faith congregations.

"Regardless of where they live, you will have more folks who go out and spend a lot of time in the center city neighborhoods," Lindsley says. "You won't find a lot of folks driving over to South Park and Piedmont Row or Ballantyne. They come to neighborhoods like ours."

Lindsley and his husband Joey Hewell moved from South End to NoDa about six months ago. Lindsley says they enjoyed South End, but in NoDa, he says, "there are tons of cars with rainbow flags and Human Rights Campaign bumper stickers." 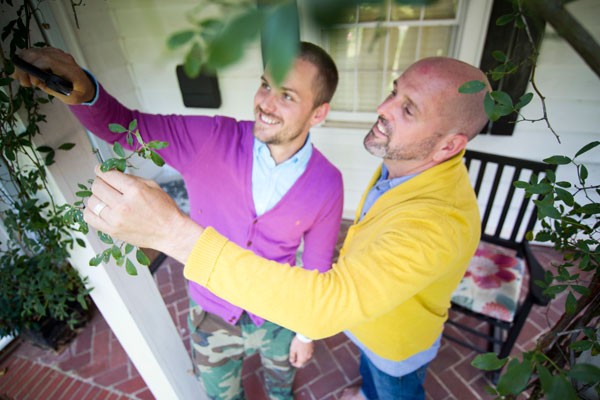 NoDa, Plaza Midwood and South End, says Lindsley, are likely the closest thing Charlotte has to true gayborhoods. A list of "gay villages" across the U.S. on Wikipedia lists those neighborhoods, too. But neither Lindsley nor Warshauer are willing to go quite so far with the "gayborhood" label.

"Despite being one of the gayest ZIP codes, Plaza Midwood is by no means a gay neighborhood," Warshauer says.

Lindsley receives the same feedback from out-of-town friends used to living in cities with larger gay districts. "They come visit and ask where is [the gayborhood] here and a lot of times comment on the fact that there aren't a lot of gay bars and other establishments," he says.

Perhaps that's because, Lindsley says, the city's gayest neighborhoods are popular with the LGBT community, but they're also popular with a wide range of people. In other words, Charlotte may just be more integrated than bigger cities.

"These neighborhoods don't just attract gay folks, but also hipsters and artsy folks and people who enjoy being around diversity of all kinds," he says. 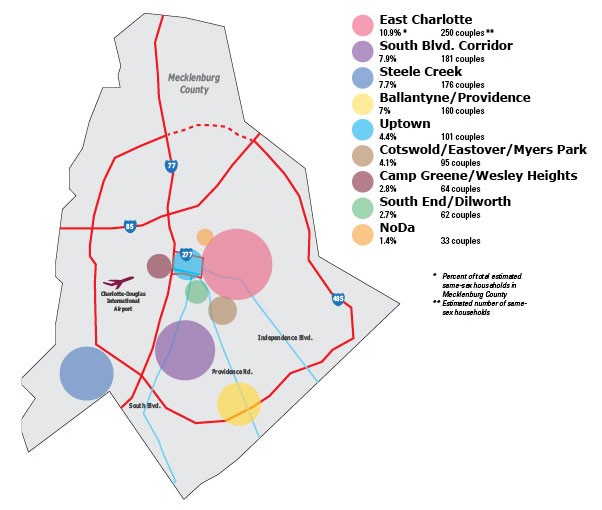 Blame it on our politics or our religious leanings, but clearly defined Southern gayborhoods are rare.

Raleigh native and resident Ian Palmquist, a former executive director of North Carolina's statewide LGBT advocacy group Equality NC, says that during the '60s and '70s people from smaller or more rural areas across the country often flocked to what they considered gay meccas: New York, San Francisco, etc. Young gay men and lesbian women wanted to live openly with other people like them — they didn't feel the same sense of acceptance enjoyed by their modern counterparts.

Whether they knew it or not, these displaced youths helped organically construct the most well-known gayborhoods in America today.

Palmquist points to people like iconic gay author Armistead Maupin, who grew up in Raleigh, went to UNC Chapel Hill and "got the hell to San Francisco as quickly as he could." After working briefly in Raleigh and Charleston, Maupin came out as gay and moved to the California's bay city, where in 1971 he began writing the legendary Tales of the City series documenting gay and straight life in San Francisco.

"The idea of living an open life in Raleigh, or I imagine in Charlotte at that time, too, was not something people necessarily considered an option," Palmquist says. "Certainly, those larger cities drew folks who wanted to live openly and be in a place that had a vibrant community."

Raleigh, Palmquist says, has the beginnings of a gayborhood in its downtown warehouse district. That's where the LGBT Center of Raleigh is located, along with three of the city's gay bars and several other gay-owned businesses. The problem, he says, is a lack of residents. Gay people live downtown, but "it hasn't reached a critical mass to be considered a true gayborhood."

The strength and vibrancy of big-city gayborhoods has been threatened in recent years, the most telling indicator being the closing of many gay bookstores (many original residents have also been priced out). Long considered de facto gay community centers, LGBT bookstores gave their consumers reading material long before mainstream booksellers. Last year, Atlanta's Outwrite Bookstore shuttered its doors. Before it went D.C.'s Lambda Rising, New York's Oscar Wilde Bookshop and San Francisco's and Los Angeles' A Different Light. Charlotte's White Rabbit, which opened in 1992, is still operating, but its Raleigh location closed in 2010. Greensboro's opened in 1985 and closed in 2003.

But some argue gayborhoods might not even be needed anymore.

"I think even in a lot of larger cities that do have traditional gayborhoods, though often gay businesses are still centered there, a lot of the community is starting to disperse," Palmquist says. "People coming out in the last 15 to 20 years are much more likely to feel OK staying where they are."

The Internet could also have something to do with it.

In a story about the decline of gayborhoods, Obit Magazine's Matt Katz writes, "In a digital world, physical entities are less critical to community identity."

This article is provided in partnership with QNotes, Charlotte's LGBT community newspaper. Learn and read more at goqnotes.com.