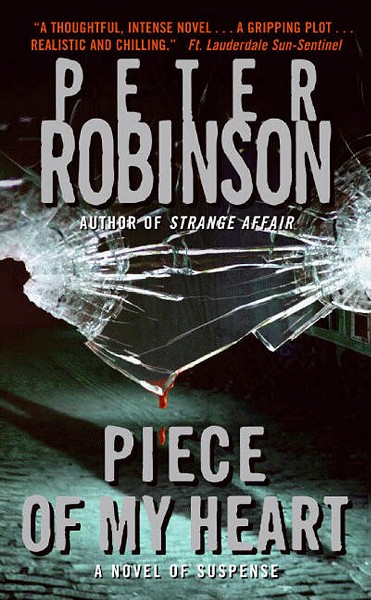 With summer underway, the usual "Junk vs. Substance" arguments about beach reading rear their sunburned heads again. It's no big secret that the most popular beach reads, by far, are mysteries and thrillers, and those genres provide plenty of ammo for both sides of the Junk/Substance fight, from the wretched repetitiveness of James "Book of the Month" Patterson to the sophisticated intricacies of Elizabeth George.

Either way, you're in luck, as the late-20th century golden age of crime novels shows no signs of slowing down. In fact, the most talked about books of the year in any genre are probably the late Swedish author Stieg Larsson's fine Millennium Trilogy of mysteries, which starts with The Girl With the Dragon Tattoo and ends with the recent The Girl Who Kicked the Hornet's Nest.

We're going to focus on the good stuff here, and let the junk fans fend for themselves. If you've read this far, you're probably familiar with some of crime fiction's better authors, such as George, Sara Paretsky, Dennis Lehane, Laura Lippman, Michael Connelly, the crop of dark Scandinavian and Icelandic writers who've popped up lately, and plenty others. What follows is a quick look at some terrific authors who aren't yet American crime lit celebrities (a couple are stars in the U.K.), but who probably should be. They offer gripping stories, lively writing, and, often, new ways of approaching the mystery genre. If I had enough money, I would guarantee that you'll like these, even if you have to take time to wipe spilled sunscreen off the pages.

Peter Robinson Robinson's series featuring Inspector Alan Banks has been hot stuff in the U.K. for years, and some of the books are being filmed for British TV. Banks, a former London detective who now lives and works in a small town in Yorkshire, likes his ale and his music, and has a knack for seeing the unexpected connections in a case. Robinson's novels are complex, character-driven, and often wrestle with important issues. Recommended: In A Dry Season, Piece of My Heart, A Necessary End.

Linda Fairstein If you like New York City, Fairstein's Alex Cooper books are right up your alley. Fairstein was chief of the Sex Crimes Unit for the Manhattan D.A.'s office for over 20 years, so what she mostly writes about are -- ta-daa -- sex crimes in New York City. Solid, complex stories, fast action, faster dialogue and, most appealingly, wonderful details about the nooks and crannies of NYC's politics, institutions and culture. Some critics think recent books in the series are running out of steam, but the earlier ones we've read are suspenseful, smart reads. Recommended: The Kills, The Bone Vault, Death Dance.

Colin Cotterill A series starring the 70something national coroner of 1970s era communist Laos doesn't immediately sound promising, but Cotterill has garnered fans and critics' raves for his novels about Dr. Siri Paiboun. The doctor's investigations are helped along by the spirits of the dead, but regularly hindered by Laos' Kafkaesque bureaucracy. Cotterill, a Brit who lives on the Gulf of Siam, knows the country and its idiosyncrasies, and it shows in his quickly paced yet rather gentle and humor-laced novels. Recommended: Start at the beginning with The Coroner's Lunch.

Ian Sansom As unexpected sleuths go, Israel Armstrong may be the ultimate. A Northern Irish, Jewish vegetarian whose job is taking care of a mobile library, Armstrong is a rather naïve, bumbling investigator who self-consciously tries to sound like detectives in American crime novels, but can't quite pull off the charade. The crimes he and his partner/driver Ted Carson investigate are slight, but the appeal here is author Sansom's satirical takes on politics, books, religious prejudice (in Northern Ireland, he has lots to work with), and life's absurdities and struggles, big and small. Recommended: The Case of the Missing Books, The Bad Book Affair.

Denise Mina Mina, a native of Glasgow, has been writing novels since 1998, and has enjoyed success for years in Europe, but readers in the U.S. started paying attention in 2005, with the stateside publication of Field of Blood. The first in a series featuring journalist Paddy Meehan, Field was the equivalent of a trumpet blast announcing a great new writer: dark, intelligent, intense, filled with three-dimensional blue-collar characters that jump off the page, and a no-nonsense protagonist whose occasional humor keeps the story from going over the darkness cliff a la Dennis Lehane. The descriptions of Glasgow life are works of art. Mina has written three Paddy Meehan novels and plans another two. Recommended: Start at the beginning with Field of Blood.